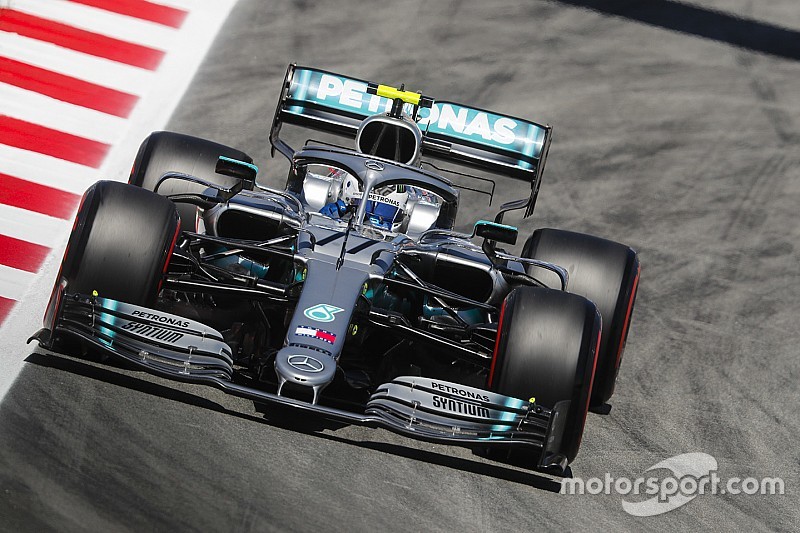 Formula 1 championship leader Valtteri Bottas eclipsed the two Ferraris to set the pace in opening Spanish Grand Prix practice but his session was ended early by an oil leak.

The Mercedes driver traded times with Charles Leclerc and Sebastian Vettel before establishing himself at the head of the order with two laps good enough to end the session quickest.

Bottas was left out of the car in the final half hour, though, as Mercedes stripped down his W10 to understand what was initially described as a hydraulic problem.

Mercedes determined an oil leak had caused a precautionary engine shutdown, which it is investigating the cause of.

The second Mercedes of Lewis Hamilton ended FP1 fourth fastest, half a second adrift after complaining of "terrible" tyre preparation.

Vettel set the early pace on soft tyres and topped the times at the midway stage of the session on a 1m18.407s.

Bottas was more than a second slower at this point but had only run the medium tyres, and immediately usurped Vettel once he bolted on softs with just over half an hour of the session left.

No other driver set a 1m17s lap, although both Ferraris finished within two tenths of Bottas.

Leclerc initially moved himself ahead of Vettel thanks to a 1m18.172s lap and his teammate botching his first flier during the second set of runs.

Vettel caught traffic in the final sector and ran wide, dipping his left wheels into the gravel, as he cleared a slower car on the outside exiting the long uphill Turn 12 right-hander.

However, after a cool-down lap, Vettel was able to push again and re-established himself as the lead Ferrari on a 1m18.066s.

Hamilton's session was understated, and included him falling to the foot of the times briefly after failing to set a competitive effort on medium tyres in the first half of FP1.

He bemoaned his rear tyres being "done" after a mediocre flying lap on softs that left him 0.6s slower than Bottas.

The Red Bulls did not feature in their usual position between Mercedes, Ferrari and the rest of the field after avoiding using soft tyres.

Pierre Gasly was the lead Red Bull representative in eighth, 1.3s off the pace, while Max Verstappen was only 12th and 0.6s slower.

Like Bottas, Verstappen ended his session early as Red Bull assessed an unknown problem on his RB15.

Red Bull's tyre strategy opened the door for Romain Grosjean to end FP1 fifth fastest as Haas seeks to respond to its poor start to the season at a more favourable circuit.

Grosjean beat the McLaren of Carlos Sainz to best-of-the-rest honours in first practice by 0.2s.

Kevin Magnussen was 0.025s slower than Sainz in the second Haas, while behind Gasly the top 10 was completed by Daniil Kvyat's Toro Rosso and Renault driver Nico Hulkenberg.

Beyond a minor early run-in between Bottas and Verstappen, who caught the Mercedes while on a flying lap and gesticulated at the points leader, the session was almost completed without major incident.

That was until Lance Stroll crashed his Racing Point with just over a minute left to run.

Stroll had a wobble on the entry to Turn 9 and locked up a front wheel as he corrected it, which sent him straight on and into the barriers nose first.

He emerged unharmed, although the front of his car picked up a significant damage, and the session ended under red flags.