Ferrari, which was the outlier in picking the fewest sets of the red-walled tyre last time out in Baku, has gone for nine sets this time for both Charles Leclerc and Sebastian Vettel.

The pair will have the joint-highest amount of softs in the field alongside Renault drivers Nico Hulkenberg and Daniel Ricciardo, and Alfa Romeo pairing Antonio Giovinazzi and Kimi Raikkonen.

Barcelona, which was the venue for F1's two weeks of pre-season testing earlier this year, marks the second race weekend this season that Pirelli will bring tyres in the C1-C3 range. The C1 tyre was previously used in Bahrain, but was largely avoided by teams.

Mercedes will have eight sets of the C3 tyre available for both Lewis Hamilton and Valtteri Bottas in Spain, whereas Red Bull drivers Pierre Gasly and Max Verstappen will have seven sets.

The only other outfit to select seven sets of softs for its drivers is the backmarker Williams team.

While Red Bull has opted for a uniform selection between its drivers, Mercedes and Ferrari have both gone for a subtle split, with Leclerc and Hamilton getting one more set of the C1 and one fewer set of the C2 than their respective teammates.

McLaren is the first team this season to select more than two sets of the C1 tyre, as Lando Norris and Carlos Sainz will both have three sets of the hard available in Barcelona. 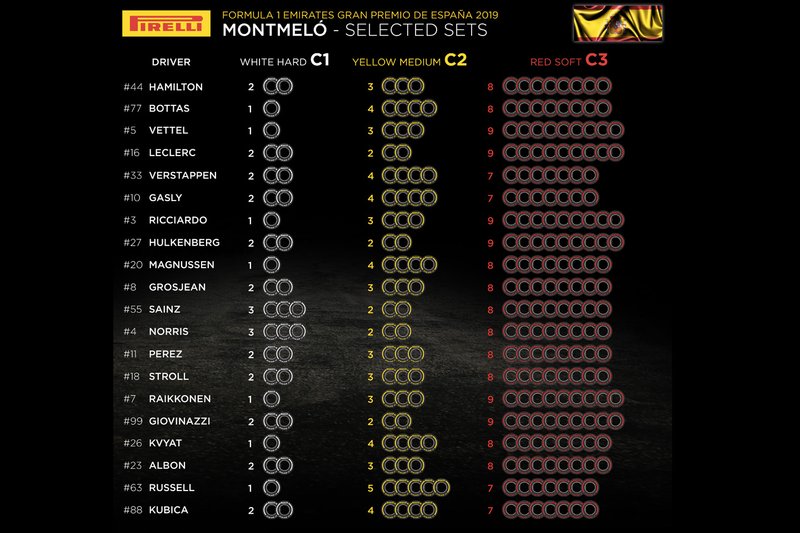 Ranking F1's most and least improved teams in 2019