Bad weather conditions caused delays for two planes containing teams’ freight following the last race in Mexico on Sunday, with some of the freight not due to arrive until Thursday.

It means the affected teams are set to work through the night to ensure that their cars are ready for the start of on-track running on Friday, with provisions being made to scrap the usual overnight curfew.

Haas boss Steiner said he was told the team’s freight had arrived in Brazil shortly before his media call on Thursday afternoon, and that it would be arriving at the track “in the next hours”. This included the team’s engines and tools required to work on the cars.

“I think the guys just have to work through the night, that’s the only thing you can do,” Steiner said.

“We can still do the event as planned, not change the timetable of the event. That’s the plan, and I think that’s achievable now.” 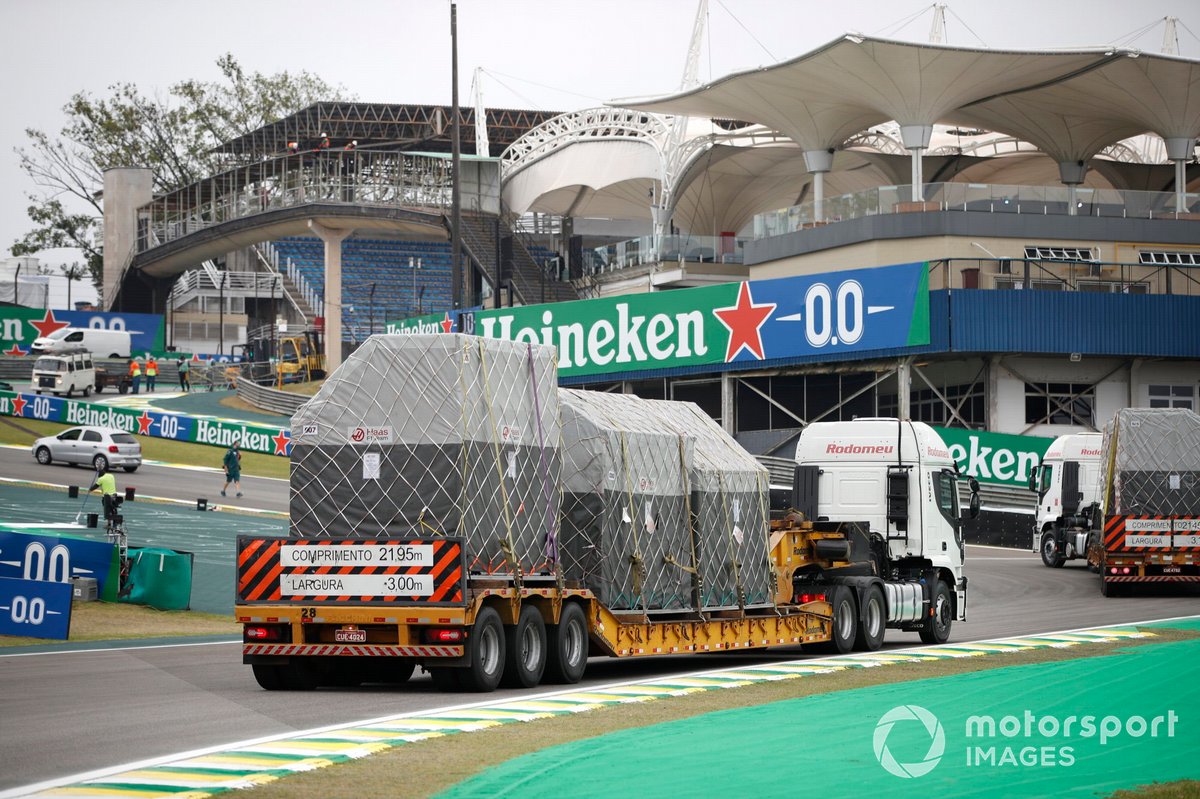 The delay has placed more pressure on teams in the middle of a triple-header spread across Mexico, Brazil and Qatar, and ahead of a revised weekend format containing a sprint race on Saturday.

Asked if the freight delay was a result of F1 trying to pack too many races into the calendar and stage three races on three different continents, Steiner downplayed its impact, believing such a delay “can happen with a normal double-header” and that it was “just one of the circumstances which happens now and then.”

Steiner added: “This year with the corona, just to get this amount of races in, we had to do [a triple-header], because in the end it got tighter and tighter, it got squeezed, and that is why they put them in. I think we will get out of this one OK.

“But for sure, FOM is looking at that to see if they are sometimes making a risk assessment that there is a risk that we cannot do something, and for sure lessons will be learned out of this one.”

F1 teams are set to face a lengthy trip from Sao Paulo to Doha following Sunday’s grand prix ahead of the inaugural F1 race in Qatar next weekend.

Interlagos is one of the trickiest tracks for teams to complete their pack-up at, but Steiner felt a delay before Qatar would have had a bigger impact.

“I think if this delay happens going to Qatar it would be a struggle,” Steiner said.

“I think for Qatar, it's also the people - it’s a long flight from here, the guys break down the garage, break down the cars, and then ship them and then jump on the plane for I think it's about 15-hour flight to get there, plus the time difference going ahead.

“So I think the next week will be pretty tough. But as you said, if you have got this issue next week, it has a bigger consequences than this week.”