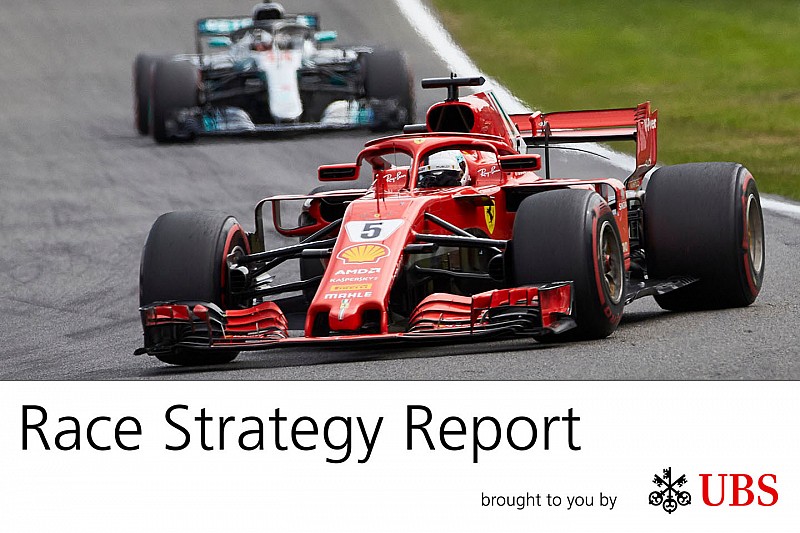 This was an unusual Belgian Grand Prix in many respects from a strategy point of view. Spa is normally up there as one of the toughest races of the season for tyre degradation and we usually see a lot of strategy moves and position changes as a result.

But this year low degradation tyres meant that only one position changed in the race due to strategy calls; the loss of position by Carlos Sainz and Renault. There was very little other movement.

At the front this was also due to the fact that a wet qualifying session and engine penalties had split up the faster cars. Hamilton and Vettel were isolated at the front, with the Force India drivers on row two acting as buffers to the Red Bull of Max Verstappen early on. 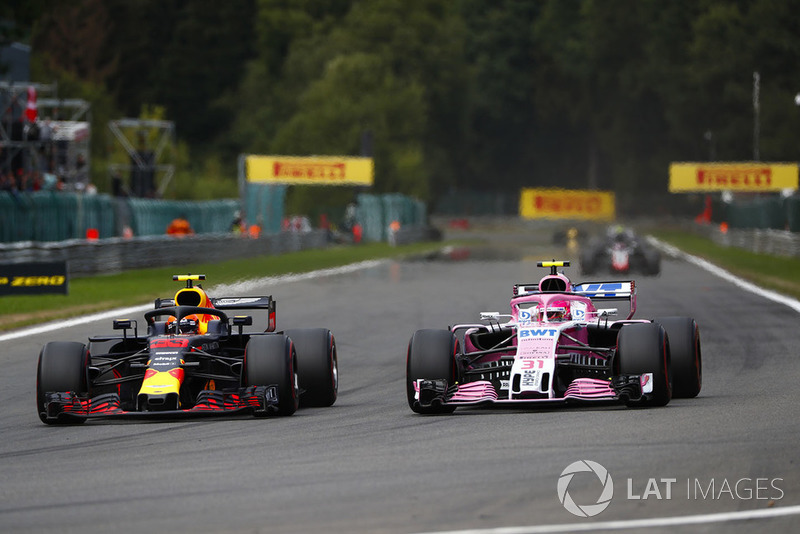 This opened up a sizeable gap and meant that the leading pair could duel without interference or tactics from the team strategists employing second drivers, trying undercuts and so on; the first time this has happened this season.

Valtteri Bottas started at the back while Kimi Raikkonen was out of position due to a strategic error in qualifying, which meant that he was not out on track at the end of the wet session when the conditions improved and lap times came down. So he started sixth.

To make matters worse, Raikkonen was then taken out by Ricciardo at the first corner with a puncture and car damage that ultimately led to his retirement. So the leaders had a clear run.

Where the race was won and lost 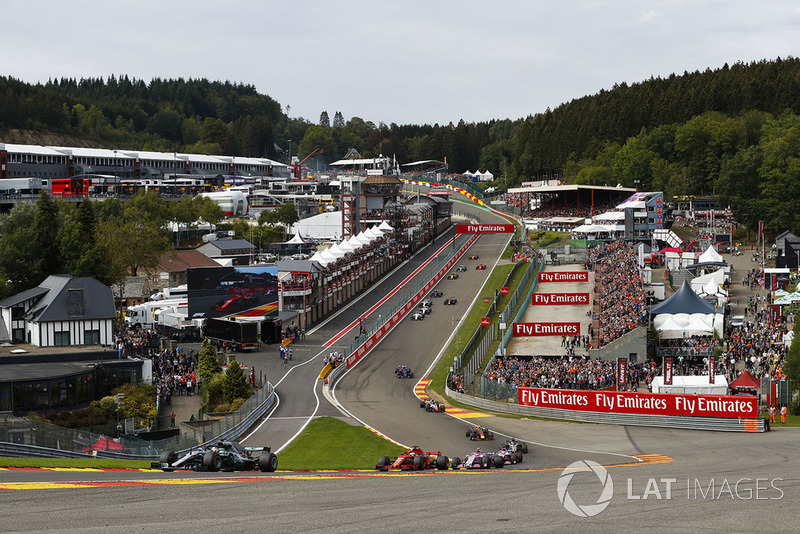 Late-race safety cars also traditionally shake up the order at Spa; this year that didn’t happen and so this race had the distinction of being the first in the hybrid era (since 2014) where cars finishing in points-paying positions were lapped.

Spa often comes down to tactics on rear wing level versus straight-line speed and to the all-important burst on the opening lap and after a safety car restart down to Les Combes chicane. We’ve seen the Belgian Grand Prix decided on this dynamic many times and this was another such occasion.

The Ferrari had less wing than the Mercedes, but perversely more grip out of the La Source hairpin and more sustained power delivery on the straights. That was enough to give Vettel the lead on the opening lap.

And when there was a safety car restart after a pile-up on the opening lap, Hamilton had a sub-optimal entry into the final chicane, which compromised his chances of getting close enough to get a slipstream ‘tow’ from Vettel into the headwind that was blowing down the straight down to Les Combes. So Vettel had the upper hand. 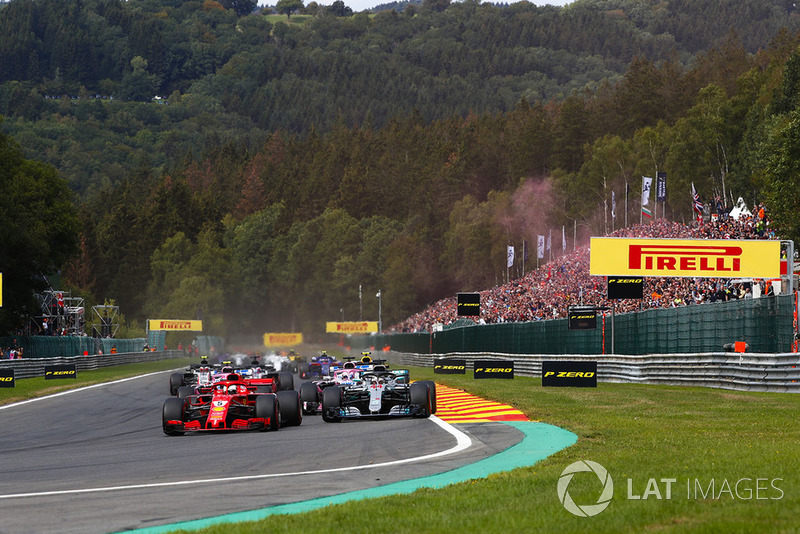 The only time Hamilton came close was by stopping a lap earlier for tyres and closing the gap as Vettel responded a lap later. With a lead of over three seconds, Vettel was not under threat of an undercut, but some readers might wonder why Ferrari waited for Mercedes to stop first before pitting. After all it brought Hamilton to one second behind and put a lot of pressure on Ferrari’s pit crew to execute the stop perfectly.

The reason is because if they had done it the other way around, Vettel would have been vulnerable to a safety car deployment. Had that happened just after he stopped, when Hamilton had stayed out, the Mercedes driver would be able to stop under the safety car, losing less race time and would have taken the lead.

The decision is based on risk and probabilities and the risk of that is considered higher than of Ferrari’s pit crew making a mistake. 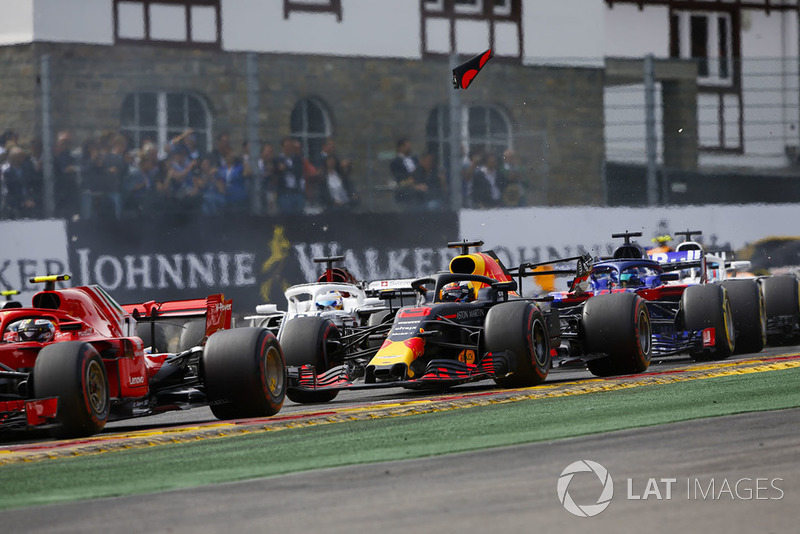 Debris from the rear wing of Ricciardo flies through the air

Raikkonen (hit by Ricciardo at La Source) and Bottas both had difficult race weekends. Bottas finished fourth but had started in 17th place due to engine penalties and, knowing that would be the case before qualifying, chose to start the race on soft tyres.

An early forced pit stop for front wing damage after the opening corner melee was not as damaging as it might have been because he was able to make the stop under the Safety Car and to fit a new set of supersoft tyres at that stage.

This was an interesting decision as the thinking that had put him onto the soft tyres for the start – the desire to run a longer opening stint than the cars ahead and gain track position – was still valid. 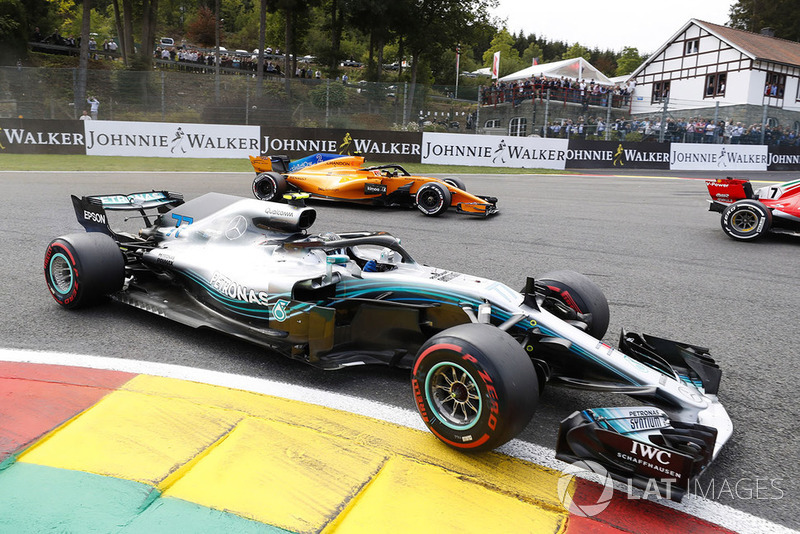 But Mercedes felt that having the softer tyres for the restart would be more valuable to get faster tyre warm up and pick up places.

Vandoorne also pitted under the early safety car for medium tyres, but this proved not to be a fast race tyre. It is essentially last year’s soft compound tyre and although the teams know a lot about that tyre, it is a slow tyre compared to the supersoft. 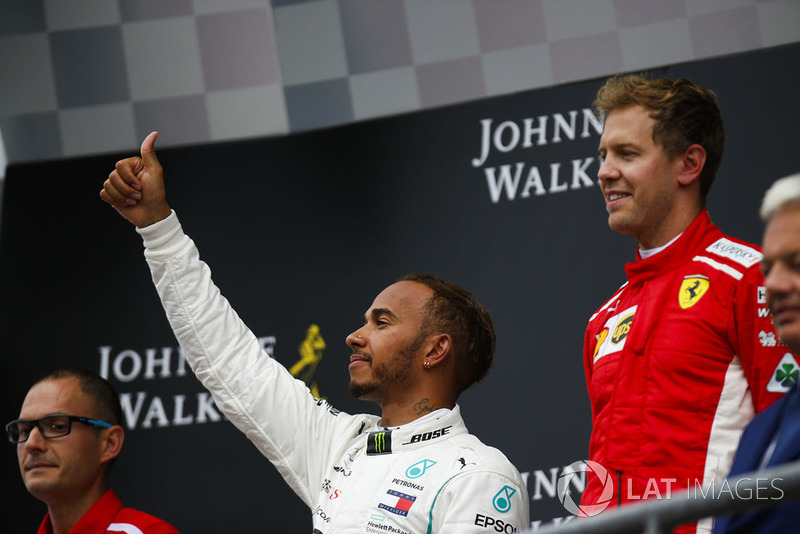 The title contenders are clearly now Vettel and Hamilton.

It will be interesting to see how much longer Mercedes leaves it before deciding to co-opt Bottas into a supporting role to Hamilton in the quest for the drivers’ championship. The objective for race strategy at Mercedes has always been to seek the race win and the best combined race result for the points in the Constructors’ table.

But you can deploy the number two driver in sub-optimal strategies, which don’t help his final result, but which to can force the opponent into compromising his strategy. 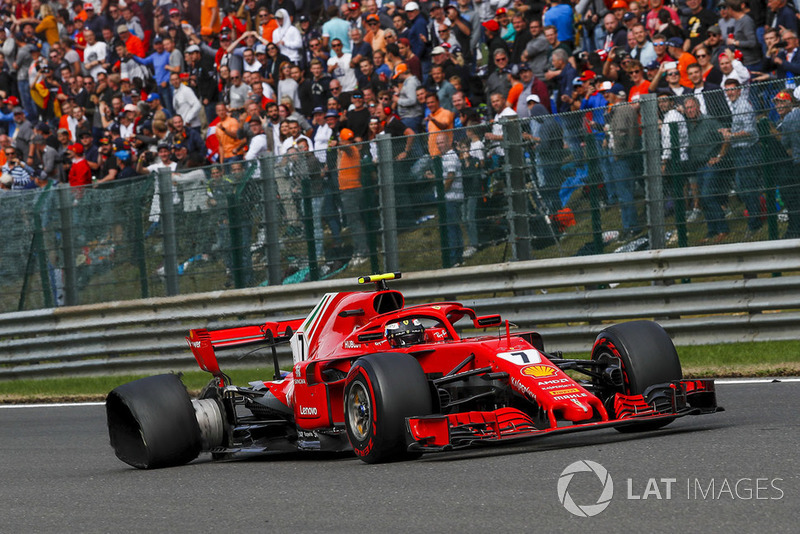 Kimi Raikkonen, Ferrari SF71H, with rear puncture on lap one

With the Ferrari looking like a superior car, the role of Raikkonen and Bottas in the outcome of the races will now be critical to the chances of their lead driver team mates.

Raikkonen has long been deployed on sub-optimal strategies to affect Mercedes’ decision making and help Vettel, and we’ve seen a lot of that this season already.

But Bottas has been allowed to run his own race up to now and will no doubt want to continue to do so. 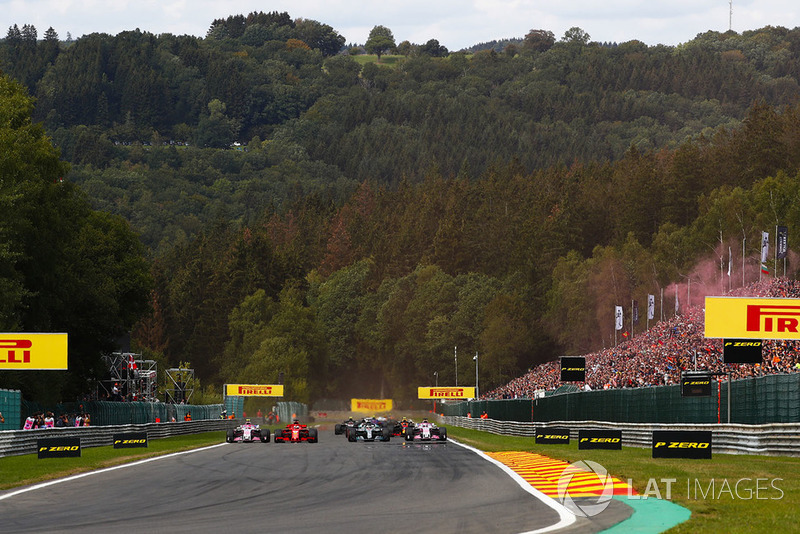 Opening lap on the Kemmel Straight 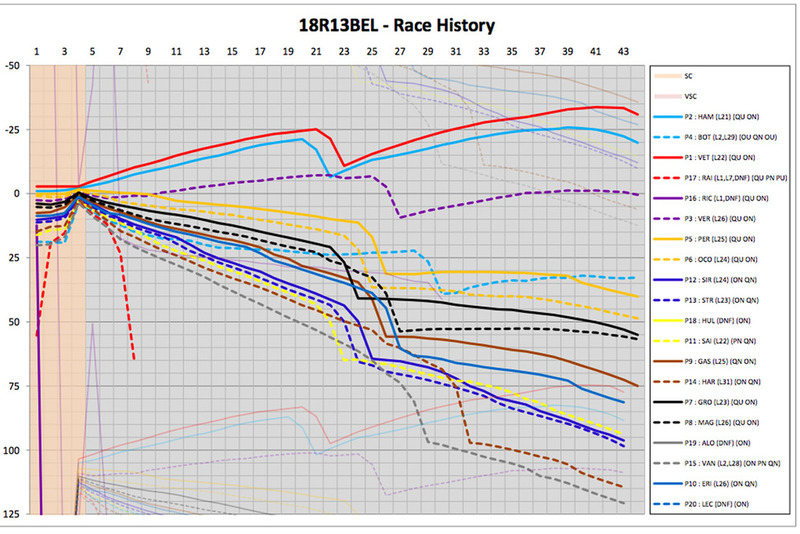 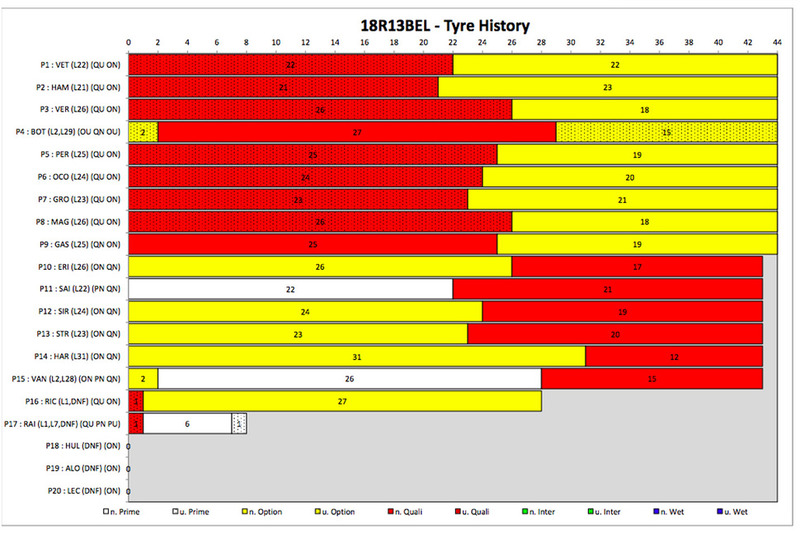