James Allen takes a strategic review of the Mexican Grand Prix, where the high altitude – and unexpected VSC intervention – played a big role in one of the most unpredictable events on the schedule.

Mexico is a great event, with huge crowds, but it's turning out to be a place for strange races, due to the unique circumstances of the altitude, which impacts the way teams prepare and run the cars and constrains overtaking.

Another decisive factor at this stage of the season is the 'nothing to lose' mentality and how that collides with teams who still have something to lose. This was one of the triggers behind what happened in Singapore and it happened again at the start in Mexico. 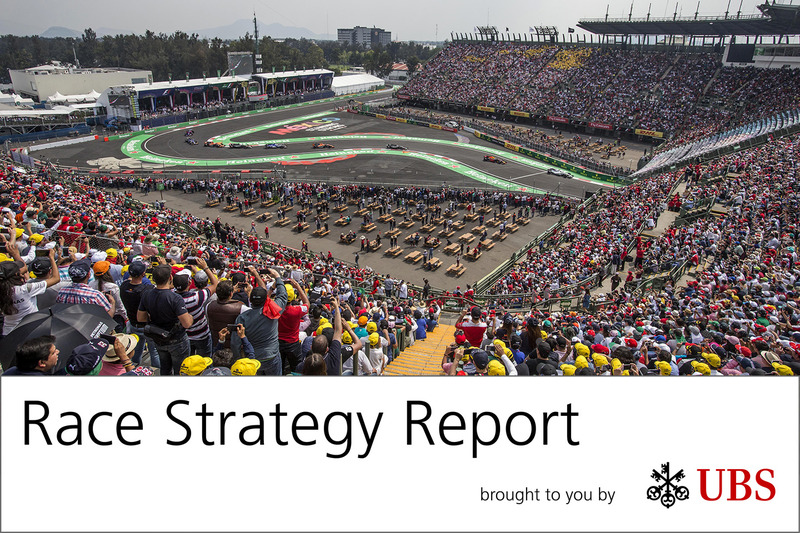 With the championship more or less decided before the race and with most teams at this stage now only racing one or two other competitors, the decision making has a different edge.

Teams like Red Bull with Max Verstappen have nothing to lose from being aggressive, while teams like Renault need to look ahead at how they can gain places and points, rather than look backwards at how they can defend a position.

The Drivers' Championship is now decided, and Force India has confirmed its fourth place in the Constructors' table, so we are likely to see most of the cars at the front going for it in the last two races, strategically-speaking, because now they all have nothing to lose.

This was a race where the Virtual Safety Car made a decisive intervention, allowing drivers who had not stopped to get a cheap pit stop and consolidate their positions, reducing the threat from behind – so drivers like Lance Stroll and Kevin Magnussen really benefitted from that. 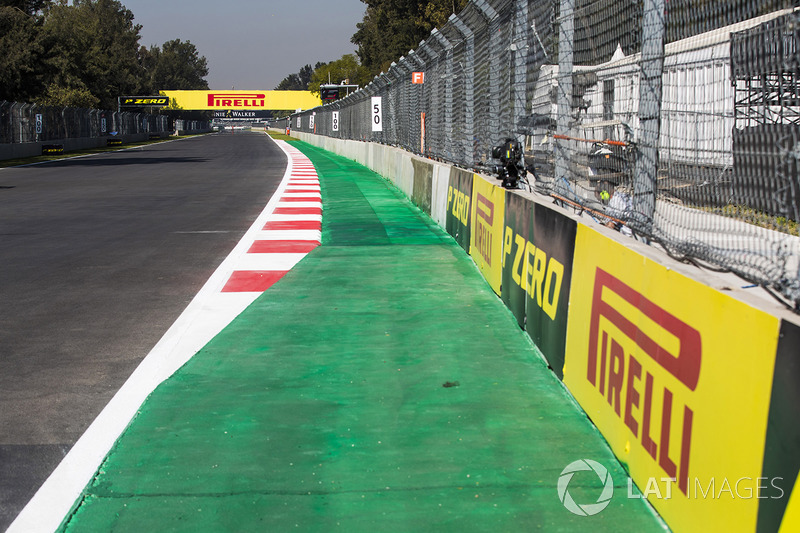 Mexico is rather like Sochi in that it is a low-energy circuit, so the tyres last a long time – even the ultrasofts went to half distance.

At the same time, the track is difficult to overtake on because it is hard to get close to the car in front without on-board temperatures soaring. The Drag Reduction System to aid overtaking has less effect at altitude, because the air is thinner and the cars are going faster on the straights for the same reason.

For most teams the clear strategy for the race was one stop with ultrasofts to around Lap 30 and then supersofts. However, the key was staying out of traffic, which could cost 3/10ths of a second per lap due to cooling limitations on the car.

So there was an argument for stopping early and using soft tyres if you could run in clear air, rather than run on supersofts in traffic.

Mexico is a track where few cars get to run at their fastest strategy. 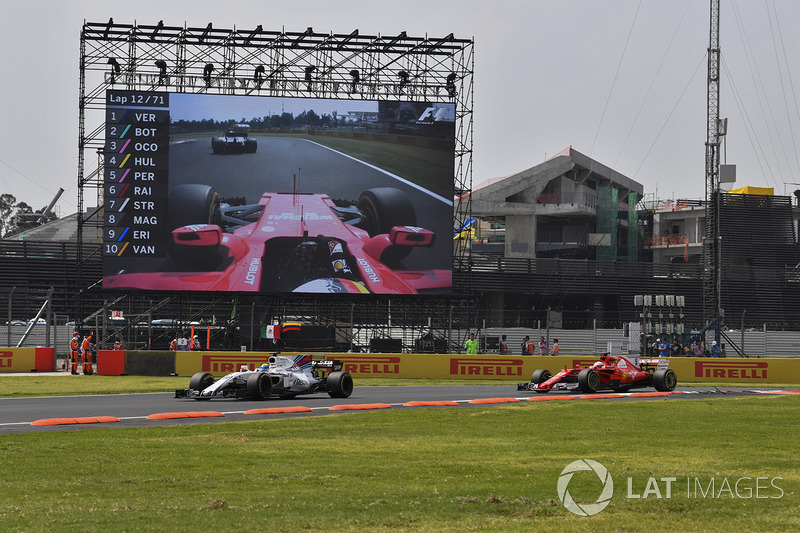 Ferrari had the fastest car in Mexico and, like Singapore, this was a race Sebastian Vettel should have won.

He took pole position, but the start was always going to be high risk with almost 900-metre drag down to Turn 1. Like Sochi, it's easy for the pole sitter to be slipstreamed and with Verstappen having nothing to lose, Vettel came off worst and then damaged his car and Lewis Hamilton's in a secondary contact. They dropped to the back, requiring a new front wing and left-rear tyre respectively. 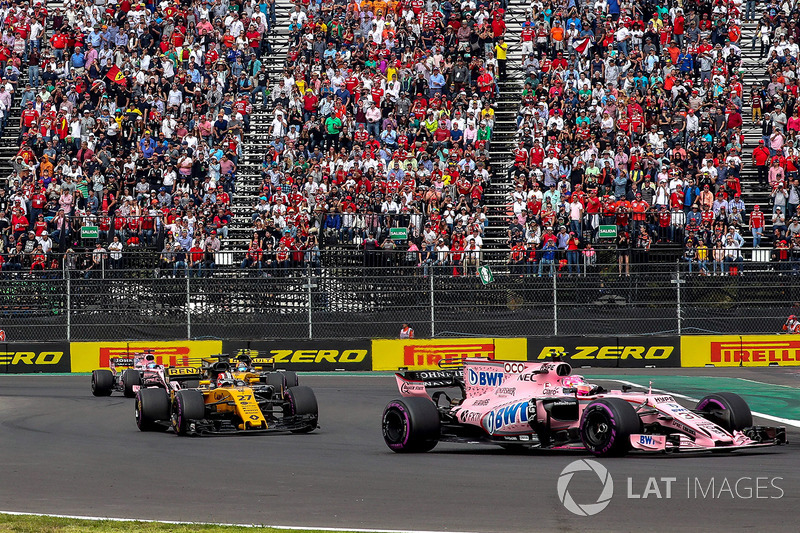 Esteban Ocon, Sahara Force India VJM10 at the start of the race

Ferrari needed to break this train of cars up for two reasons; to get Raikkonen ahead of these midfield cars and also to create spaces so Vettel's path through the field would be clearer.

During Lap 18 Raikkonen was told to pit, a very early and aggressive move, but then told to do the opposite of what Perez did. Force India, thinking more of defending at this point than moving forward, pitted Perez to cover Ferrari – so Raikkonen continued. 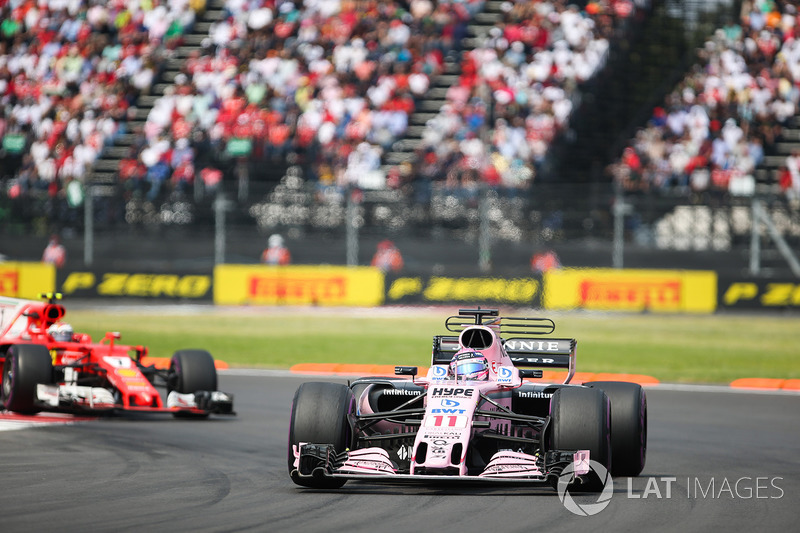 This early stop was a problem for Perez because he came out into traffic behind Kevin Magnussen, which was avoidable. And it was not until Lap 30 that he managed to pass him.

If they had allowed Raikkonen to stop, for softs, he would probably have had a slow warm-up on the tyre and Perez could have pitted a lap later for supersofts to cover him. Force India clearly doubted whether the supersoft would reach the end of the race, but it turned out that they would have done.

But Perez's move triggered Renault into a reaction with Hulkenberg, at this stage Renault's only remaining car in the race. If Force India didn't need to stop on Lap 18, then Renault certainly didn't need to stop with Hulkenberg on Lap 19, because it too put him out into traffic behind Magnussen, instead of travelling quickly in a gap behind Ocon. 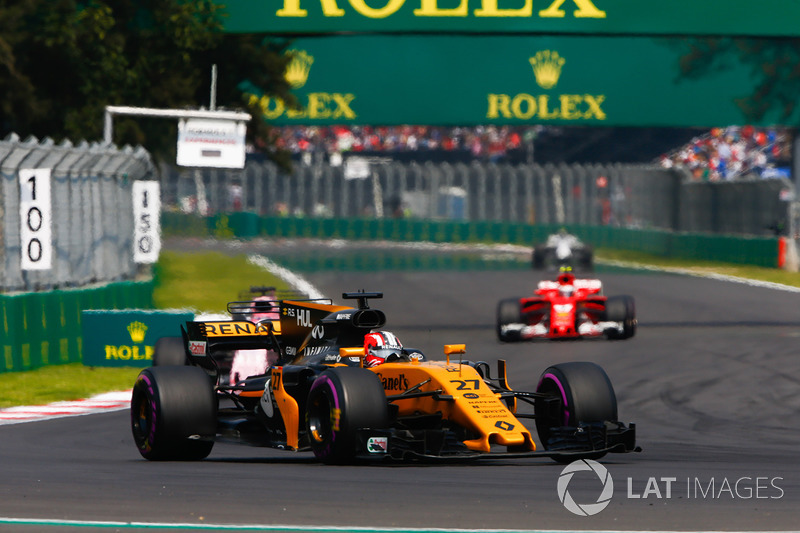 And there was a further negative knock on effect of sitting in traffic; it meant that his power unit overheated and ultimately he retired the car on Lap 25.

Hulkenberg's stop thus triggered Force India into pitting Ocon from fourth. Arguably, this too wasn't necessary; with the performance deltas between cars reduced by the anomalies of racing at altitude, Ocon would have been able to hold Raikkonen in all likelihood.

As it turned out, the Virtual Safety Car gave them all a cheap pit stop on Lap 32, so Ocon might have had his first podium if he hadn't stopped already. 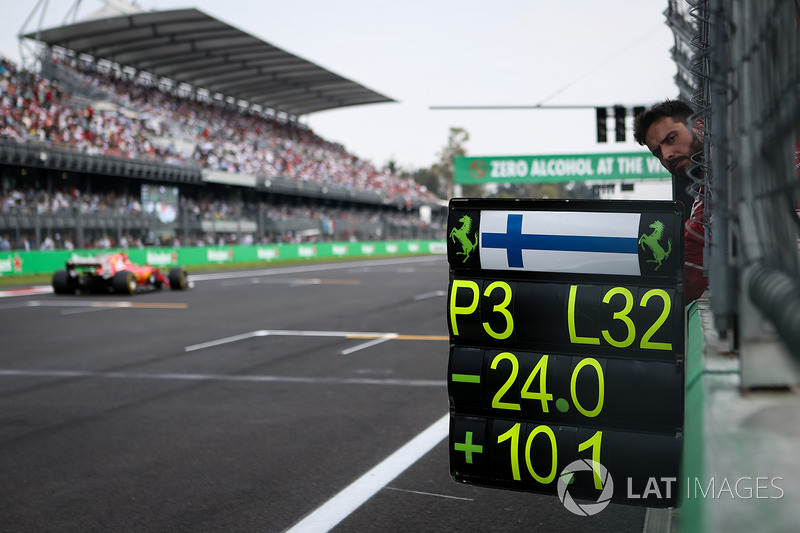 Raikkonen continued without the handicap of the early pitstop, and was able to take advantage of the Virtual Safety Car to make his stop and consolidate his position.

The only odd thing about Raikkonen's race was that he fitted the soft tyre rather than the supersoft. That was because he didn't have a new set of supersofts. Ferrari had chosen to use it in Q1, and to save a set of ultrasofts for the race.

This was presumably in case of a situation of having a chance to attack at the end of the race on a two stop, but that seemed strange as all the indicators were that a one-stop race with ultrasoft then supersoft would be the default. 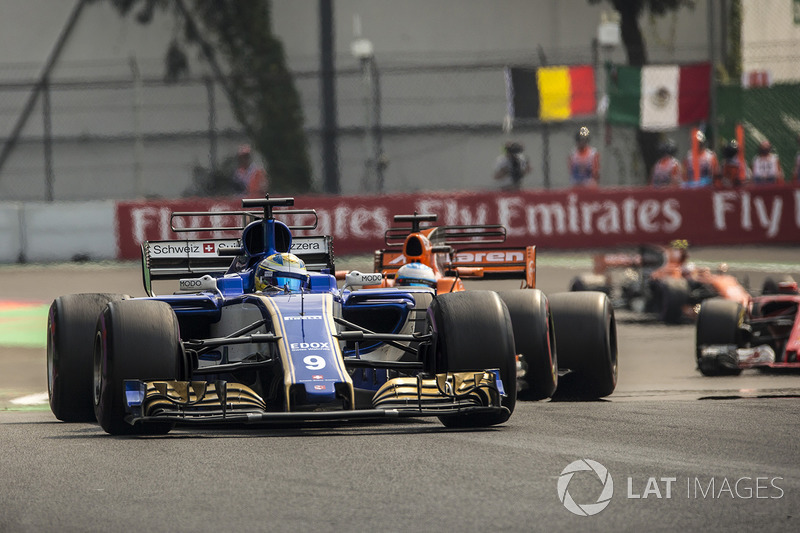 Virtual Safety Car not great for everyone

Sauber has been merrily plugging away this season, with only two point-scoring finishes and no joy since June.

Last year, Marcus Ericsson came close to scoring in Mexico with a bold strategy that saw him pit on Lap 1 and then run to the finish on a single set of tyres thereafter. This strategy relied on the fact that in the midfield, the pace differences between cars were minimized by the traffic and the difficulty of overtaking.

They did a variant on that strategy this year, pitting one car early (Pascal Wehrlein) and the other one late (Ericsson). This put them in the position where they were a pit stop apart in time so rivals like Stoffel Vandoorne couldn't get them because if he tried to undercut Ericsson he would come out behind Wehrlein and get held up.

It was working quite well until the Virtual Safety Car, which neutralises such strategies. Ericsson's car later failed in the race anyway, but it was interesting to see a team trying something different at the back of the field. 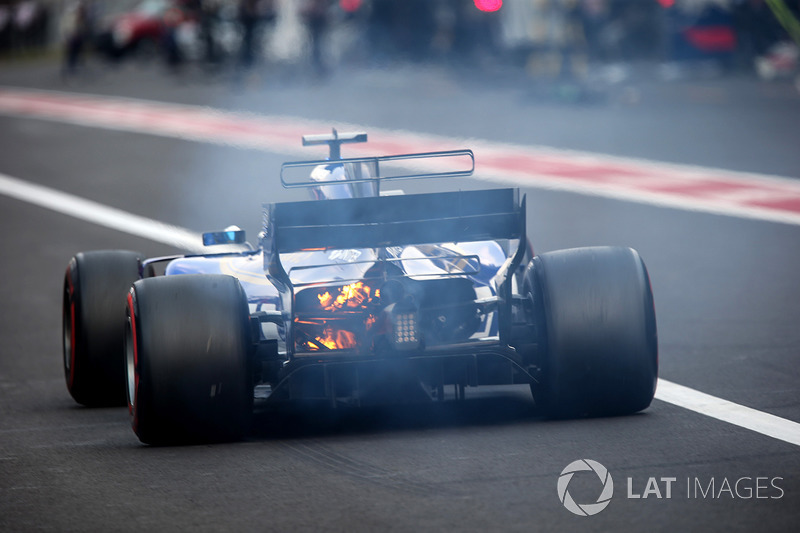 Marcus Ericsson, Sauber C36 retires from the race with a fire

The UBS Race Strategy Report is written by James Allen with input and data from several of the leading teams' strategists, from Pirelli and from JA on F1 technical adviser Dominic Harlow.

A graphic representation of the Race History in terms of the lap times of each car. It shows the relative pace of the cars and the gaps between them in the race. Upward curve is good pace, downward curve demonstrates slower pace. Sudden drop is a pit stop. 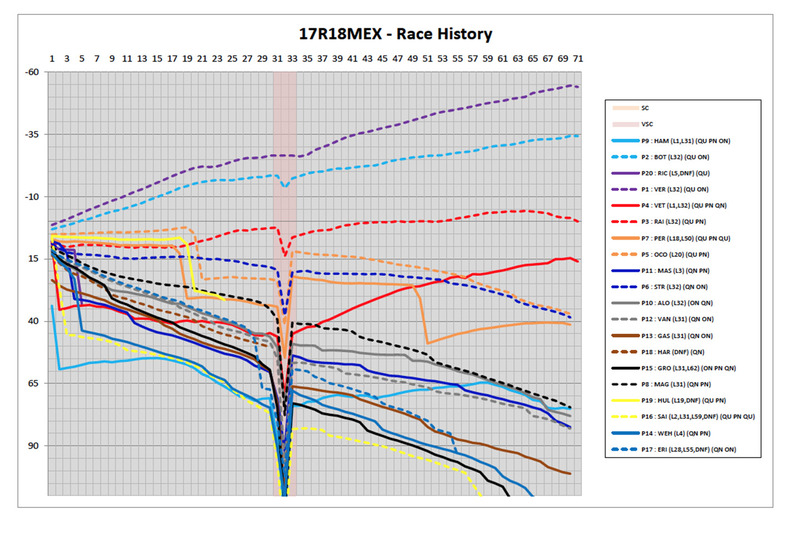 Look at how the Perez/Hulkenberg/Raikkonen/Ocon battle resolves itself with a sequence of stops. Stroll's race is a good example of riding your luck after a strong start and focusing on track position.

He lucked in with the Virtual Safety Car at the right moment when he needed to stop, but you have to be in it to win it!

Perez stops a second time to see if he can catch Stroll on fresh tyres, but the teenager judges it well for another strong result in sixth. 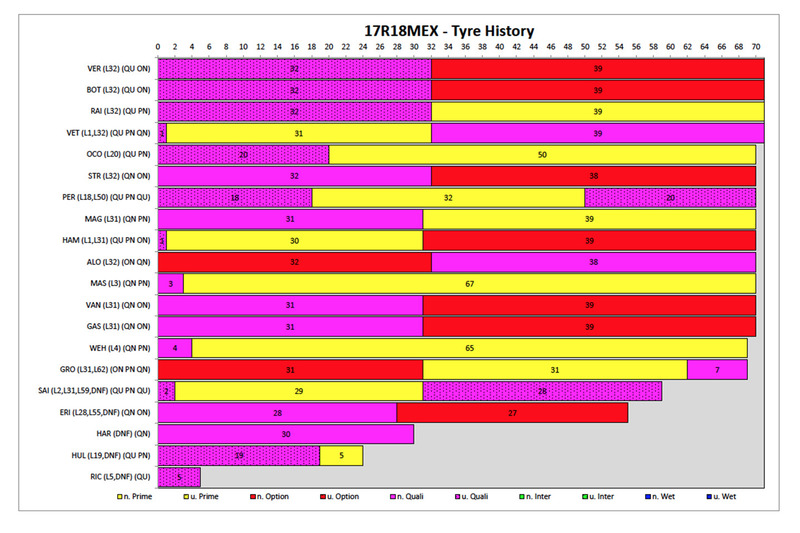 Ericsson says Sauber has made a breakthrough