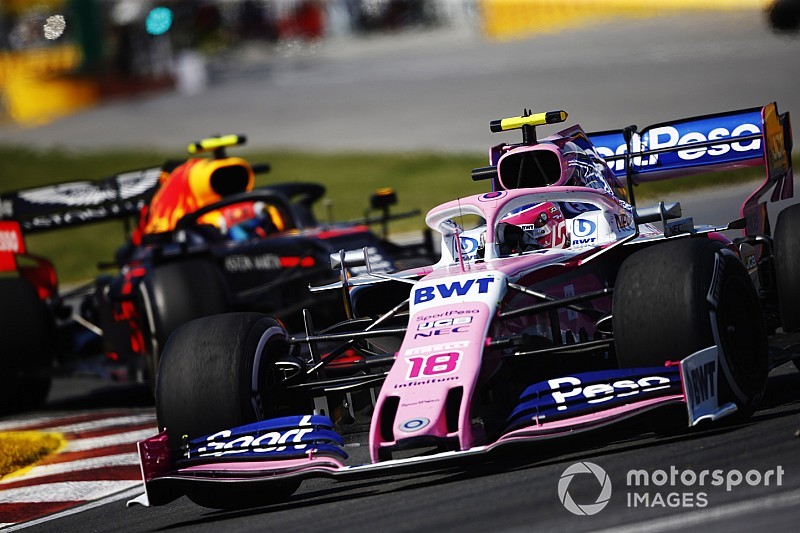 Lance Stroll gave his Racing Point Formula 1 team a boost with a "balls out" performance in Montreal that saw the local driver jump from 17th on the grid to ninth at the flag.

The result was a relief for the Silverstone team after it failed to log a point in the two races since a major new aero update package was introduced in Spain.

Stroll had missed FP3 with an early failure of the latest Mercedes power unit, and he had to revert to his well-used older spec example for qualifying and the race.

Like Max Verstappen, he started on the hard tyre, and having made a good start he reached as high as eighth before his late stop for mediums.

Having dropped only two spots he subsequently passed Carlos Sainz in the closing laps to claim ninth.

"I just put all my emotions on the table, it was just balls out," said Stroll. "I loved every minute of it, and was fully committed from lap one onwards. Some good overtakes, Giovinazzi, Perez down to the hairpin, Sainz for P9. It was a great race, and one I'm going to remember.

"Actually a lot of the job was done on track, pace, passing, aside from the start. That's what I'm really pleased about, we had to work for it, and we got it done. It's great, to do it at home is always special, and it's exactly what happened today.

"Everything considered, the engine blow-up really put us on the back foot, no running in P3, we took a hit in terms of performance for qualifying and the race, and we still managed to grab two points, which is fantastic."

"The whole team needed it, everybody needed it," he told Motorsport.com. "I could not be happier. We brought a few things, we know this track suits this kind of track better, so we were really hoping to have both cars in Q3.

"We had higher expectations before the engine blew in FP3, and then that put us on the back foot, having to take an old engine. With the new engine, we probably would have been in Q3, or close to knocking on the door. That was disappointing.

"But a superb drive in the race, flawless, Lance didn't put a wheel wrong, did what what he was told to with the brakes and tyres. His pace was strong pretty much every lap, and he passed when he needed to. Really well driven, and I'm really happy that it happened here at home."

Team principal Otmar Szafnauer also praised Stroll's performance after what has been a difficult year for the Canadian thus far.

"This was a bit of a boost, it shows we can race well, like in the old days," he told Motorsport.com. "Lance did a great job, he looked after the tyre, looked after the brakes, had a good introduction to the tyre so it would last at the end.

"He was being held up by Sainz, and because it took a few laps to overtake him, Kvyat caught him. Then he overtake Sainz, and Kvyat got Sainz almost immediately. But because he had the tyre life left, he pulled away from the Toro Rosso."

Dixon: Aeroscreen is “maybe where Halo needs to go”