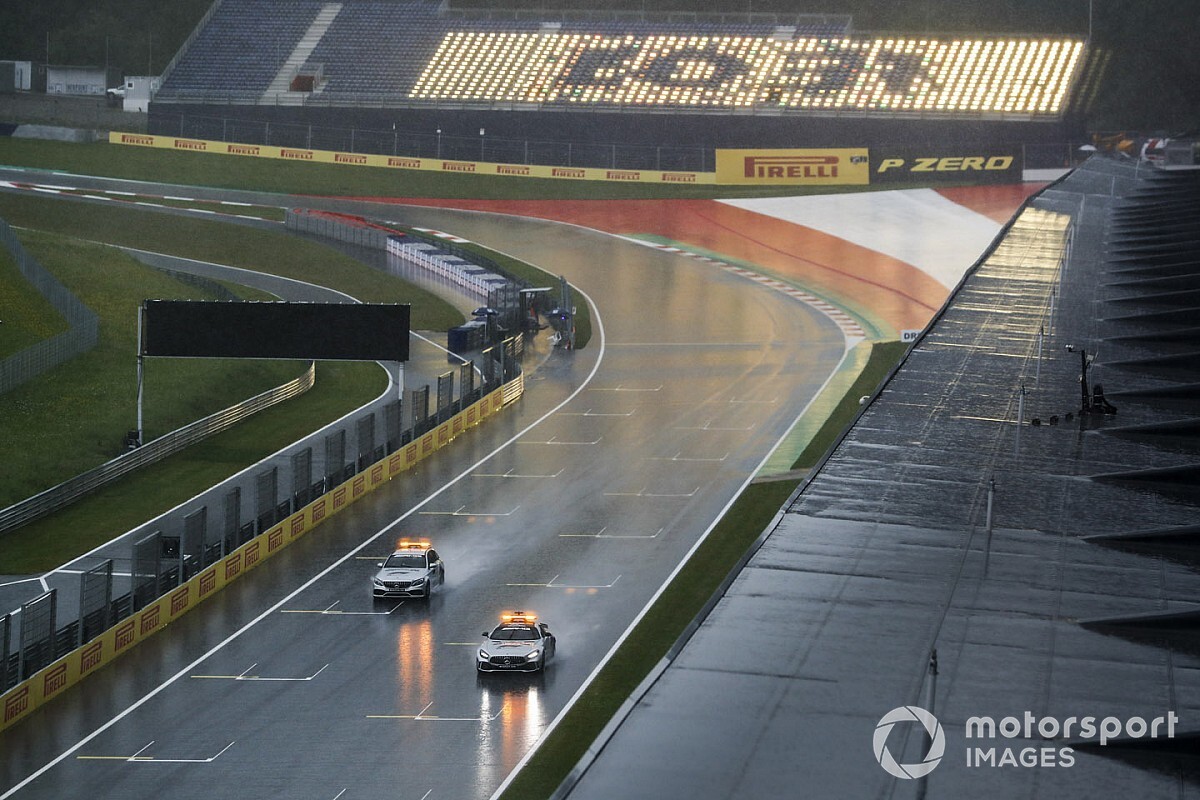 The third practice session for Formula 1's inaugural Styrian Grand Prix was abandoned due to torrential rain at the Red Bull Ring.

After Saturday's Formula 3 race was called just after half-distance due to the wet weather, F1's third practice session of the weekend was delayed indefinitely just before its scheduled start time of 12pm local time.

But as conditions did not improve during the allotted one-hour session for FP3, it was called off 40 minutes after it was supposed to begin.

An FIA bulletin announcing the news read: “After consultation and recommendation of the FIA Formula 1 safety delegate, the stewards decide that the Formula 1 free practice three will be cancelled due to the inclement weather and safety reasons in accordance with Art. 2.1.6.a and 11.9.3.m of the FIA International Sporting Code.”

Qualifying is scheduled to get underway at 3pm local but unless the rain eases off it is unlikely this session will be able to take place on Saturday, although F1 remains hopeful some running can take place.

But if no running is possible today, F1 has two choices – either alter its Sunday schedule due to more favourable conditions forecast for tomorrow and hold qualifying on Sunday morning, or set the grid by the order of Friday's FP2 session.

Should the latter option be take, Red Bull's Max Verstappen would start on pole ahead of Austrian GP winner Valtteri Bottas and Racing Point pair Sergio Perez and Lance Stroll.

Lewis Hamilton would start sixth after struggling with the handling of his Mercedes W11 during Friday afternoon's running, where it appeared as if Red Bull had made a step to close the gap to Mercedes at the head of the field.

But the option of holding qualifying on Sunday morning is F1's preferred choice, as the weather conditions are predicted to be dry.

Delaying qualifying to Sunday has been an option used in recent F1 history – with the grid-setting session taking place ahead of the race at the 2019 Japanese Grand Prix, when Typhoon Hagibis brought extreme weather to Suzuka, and the 2015 US Grand Prix at Austin – where FP3 took place as planned before qualifying was delayed several times.

It is understood that in order to fit in as much of the planned Styrian GP track action as possible - including the F1 support categories - the new Sunday schedule would not feature the Formula 2 sprint race and one of the Porsche Supercup races.