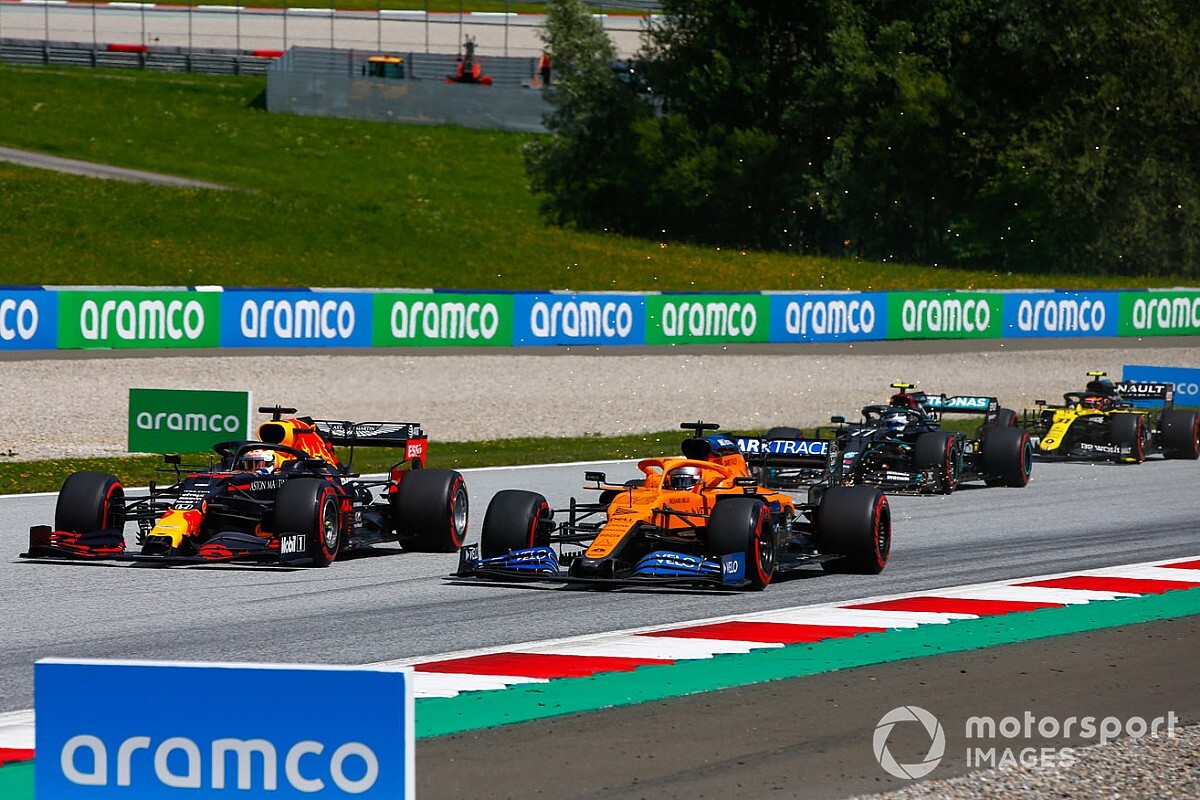 Lewis Hamilton won the Styrian Grand Prix, the second round of the 2020 Formula 1 World Championship season at the Red Bull Ring, as Ferrari suffered the ignominy of its cars colliding on the opening lap.

From pole position, Hamilton led the battling Max Verstappen (Red Bull) and McLaren’s Sainz on the opening lap, as the Ferraris collided at Turn 3, which caused an immediate safety car to allow the marshals to clear the track of debris. Sebastian Vettel toured into the pits with no rear wing, while Charles Leclerc – who initiated the contact by lunging up the inside – needed a fresh front wing. Vettel’s car was retired immediately, while an apologetic Leclerc continued with floor damage but retired a couple of laps later.

At the restart, Hamilton led Verstappen, Sainz, Valtteri Bottas (Mercedes) and Alex Albon (Red Bull). Bottas passed Sainz for third on Lap 6, and Albon also DRS-ed past him two laps later. The Renaults duelled over sixth position, delaying each other and allowing Sainz to pull away, and the Racing Points to catch them. Daniel Ricciardo finally passed Esteban Ocon, at the third attempt, on Lap 20.

Verstappen pitted first to switch from softs to mediums on Lap 24, to protect from being undercut by Bottas, with Hamilton pitting two laps later and Bottas staying out much longer. Bottas stopped on Lap 34, rejoining behind Verstappen – but saving 10 laps on his new mediums.

Hamilton was untroubled out front, managing a 5s-plus gap over Verstappen, who was suffering some front wing endplate damage, so Max’s attentions turned to keeping Bottas at bay on his fresher tyres. Bottas got into DRS range with six laps remaining, as Verstappen reported “shocking” driveability exiting Turn 3 due to his higher rear tyre wear.

They swapped positions on Lap 67, as Verstappen refused to cede the runner-up spot without a fight, but Bottas sealed the deal a lap later to finish second.

Sainz suffered a poor pitstop due to a left-rear wheel that refused to engage, losing his fifth place to Ricciardo – and two further spots to both Racing Points. Sergio Perez vaulted up the order from 17th on the grid, passing Ricciardo for fifth with 22 laps to go. He then chased Albon, setting a sequence of fastest laps in his chase of the Red Bull, but Albon clung to fourth despite some contact that broke Perez’s front wing.

McLaren switched Sainz and Lando Norris in an attempt to catch the Ricciardo/Stroll battle with 10 laps to go. Stroll snatched sixth from Ricciardo at Turn 3, with Norris also passing Ricciardo. Norris passed Stroll on the final lap, and then grabbed fifth from an ailing Perez at the final corner, with the Mexican finishing just ahead of Stroll and Ricciardo with his damaged car.

Ocon retired from seventh place with a suspected cooling issue that caused his engine to overheat.

The race as it happened