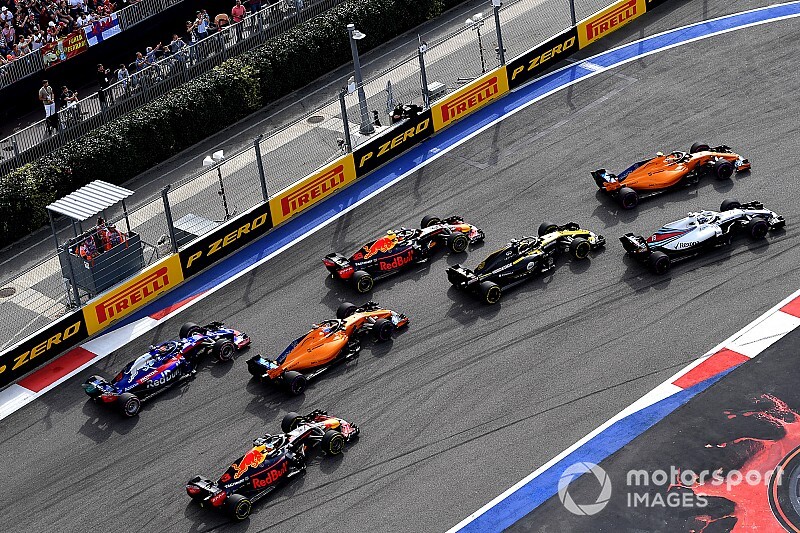 Formula 1 team bosses have held a meeting ahead of the Japanese Grand Prix to discuss ways to improved the show and mixing up strategies.

The significance of the meeting was that it was an informal gathering with no specific agenda and without any FIA or Liberty/F1 representation, in stark contrast to the more regimented Strategy Group format where future ideas are usually discussed.

It was the first time in a year that the teams have met without the sport's other key stakeholders in the room, and thus also an intriguing political development as the debate over the direction to be taken for the revamp of the sport in 2021 continues to ramp up.

Teams are clearly hoping that they can present a united front on key issues.

"It was just to talk about the state of F1 and how we're going to improve it going forward," said Force India team principal Otmar Szafnauer. "The racing's got a lot better but it could be better.

"So for example if we have a two pitstop race it might be better, or a combination of some doing one and some doing two. So how do we get there? It was all about improving the show.

"The Strategy Group has a specific agenda, and you stick to the agenda. But today it was talk about anything. I thought it was a good idea and maybe we'd come up with some suggestions, but I didn't hear anything different from whatever was said before – two stops better than one stop, how are we going to make that happen?

"There are different opinions, but the one thing we all agree on is if we can split strategies, that will be good. Because everyone tends to the same strategy now. But at the beginning [with Pirelli] it wasn't like that, if you remember."

Szafnauer said it was a positive discussion, even if there were few concrete conclusions.

"We came out thinking that it was good to get together and mull this stuff over, to see what idea that we have, and once we're aligned we can talk to FOM too. It was just getting our thoughts together.

"I think whether we were aligned or have differences, it's just good to feed that back to the FIA. Sometimes not all of us do. It's good to make good decisions with a lot of information. The more information you have, the better outcome that you're going to have in your decision making."

Szafnauer believes that the teams should get together on a regular basis.

"It doesn't happen that often. I think it's just good to sit down and chat. I think the last one we had was in Malaysia [2017].

"I think we should continue to do it, meet once a month, as opposed to just ad hoc, and let everyone vent their opinions.

Hamilton sends a message to Vettel