Unveiled on Friday, Ferrari's SF70H is the Italian marque's first interpretation of the new regulations - one that it hopes will prove sufficiently capable for the team to mount a proper title challenge again. 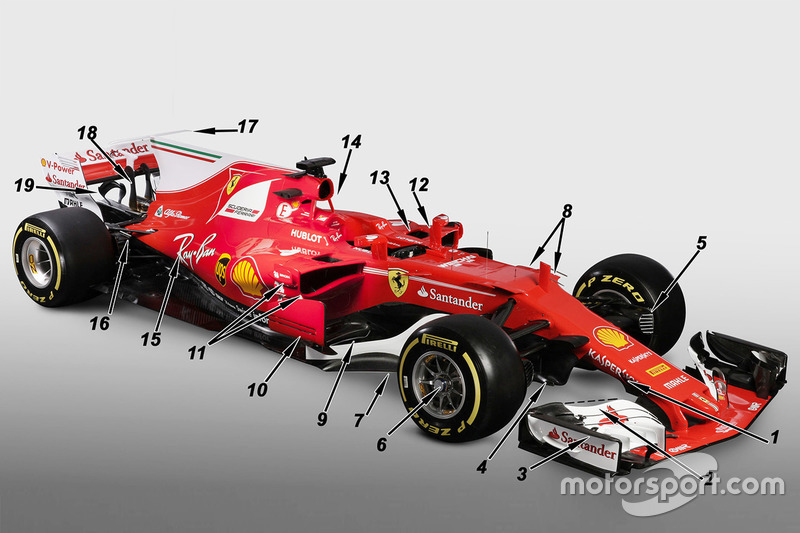 Ferrari is always a little coy when it comes to showing the details of a new car and it's likely that, although this launch car does have fresh ideas on it, the team could be holding back in some respects.

The front wing is conceptually very similar to last year's design but clearly follows the dimensional and shape guidelines that all of the teams must follow this season.

In terms of changes, the team has isolated the endplate [3], with a triangular surface added to its upper edge (the F14T sported something every similar, albeit with a slot along its length) and a revised canard to adjust the pressure gradient underneath.

The upper flap [2] has been trimmed for the launch images (dotted line) but, as has been the case with Ferrari in the past, this may change from circuit to circuit, dependent on the load needed.

When compared with its predecessor, the nose is a little broader, widening the mounting pillars and increasing flow under the nose.

The pillars have also been carefully shaped to improve flow downstream, with a new ‘S’ duct inlet [1] present just behind. Its design bears the hallmarks of the solution used by Mercedes last season, paired with a similarly large outlet in the vanity panel to improve how the airflow transitions over the bump.

While most teams have moved to a scoopless front brake duct arrangement, to reduce the scoop's aerodynamic impact, Ferrari continue to persevere with a scoop, with additional flow derived through it to supply the blown axle.

This year the team has added a guard across the inlet's face in order to limit the chance of collecting debris. The blown axle's outlet [6] is blanked off but will undoubtedly be used in 2017, supplementing the aerodynamic shaping of the tyre wake by the front wing.

Ferrari, like its closest rivals, has in the last few years pushed the letter of the law when it comes to mounting the camera housings on the nose, in order to improve how they fit in with the suspension aerodynamics.

This year it has gone with a more neutral approach though, with the housings simply affixed to the side of the nose. However, just below the camera housings we find a longer pair of vanes mounted on the side of nose, rather than on the underside, due to the tapered shape of the nose.

These new vanes are shaped in order to overlap with the turning vanes that are placed under the chassis as they work together to manipulate the airflow.

Surrounding the ‘S’ duct are four winglets [8] which will limit the upwash usually prevalent in this area and help direct it back down toward the sidepods to improve their aerodynamic performance.

Between these winglets and the sidepod are a pair of horns which are also designed to improve the sidepod's performance, especially the air being drawn into the very shallow inlets.

The complexity and development of this area of the car will be frantic in 2017 - and Ferrari's opening gambit is a little lukewarm, although that doesn't mean it won't be effective. The bargeboard is made up of numerous elements, but  the main one is relatively conventional at this stage, albeit much longer than the ones allowed since 2009.

The lower section is detached from the main bargeboard but also acts as a footplate, with the small arches [1] providing the airflow a shape to follow, of which the bulge [2] will provide significant shaping, too.

Just as we've seen from the other challengers, the SF70H’s floor radius has been maximized by the change in regulations. 50mm was the tolerance before, but now it's been replaced by a 100mm tolerance.

This has led all of the teams to create an upturn [9] that improves how much air gets to the underfloor and diffuser.

The lower, forwardmost airflow conditioner [10] features two horizontal slots and can be found mounted astride an axehead on top of the main bargeboard. 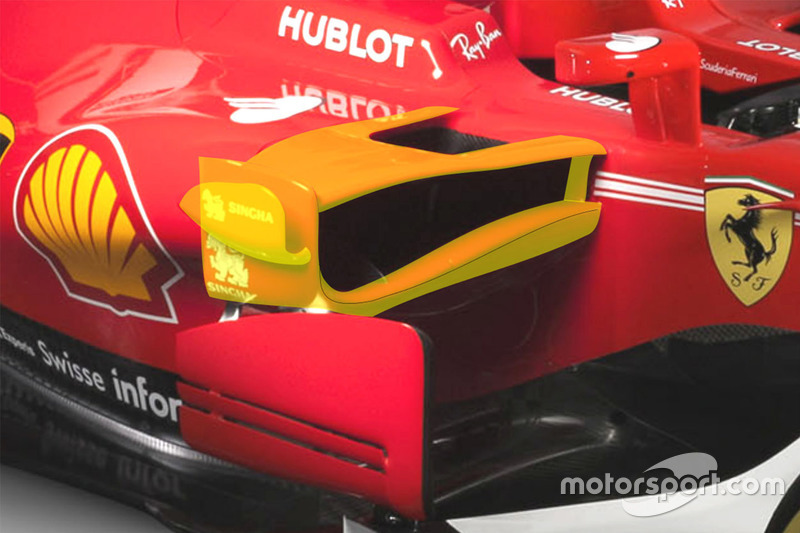 The main airflow conditioner is actually a little more difficult to decipher as it appears to be the sidepod's inlet on first inspection - however, Ferrari has cleverly designed this area of the car to improve performance by masking the inlet with other aerodynamic surfaces that can be changed to suit the various conditions they'll face (highlighted in yellow).

This gives the sidepods a very interesting shape, with a significant undercut and two distinct cooling inlets, one in the conventional position and the other fed between the wishbone shaped upper surface of the airflow conditioners and the leading edge of the sidepod [13]. 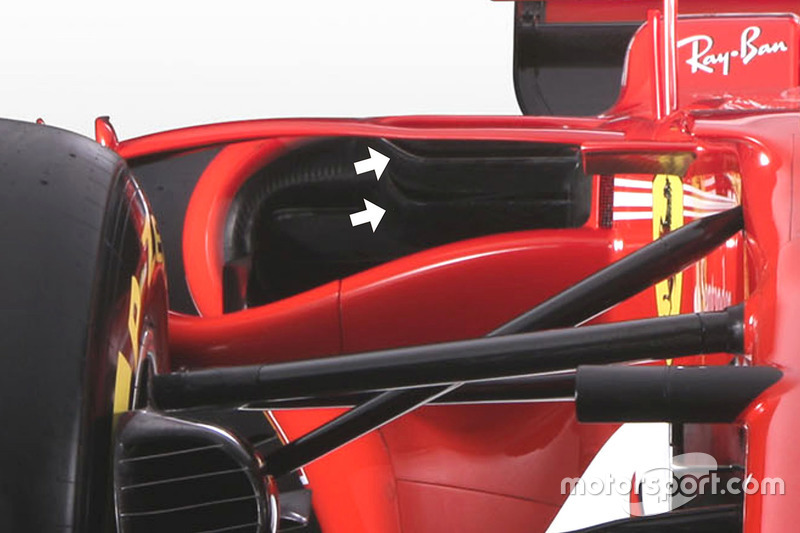 The upper inlet is compartmentalised (arrows), encapsulating the airflow it receives, and either cools something other than the radiator (i.e. ERS coolers or electronics) or aerodynamically assists the radiator, perhaps in a similar way to how the the SF15-T was presented. 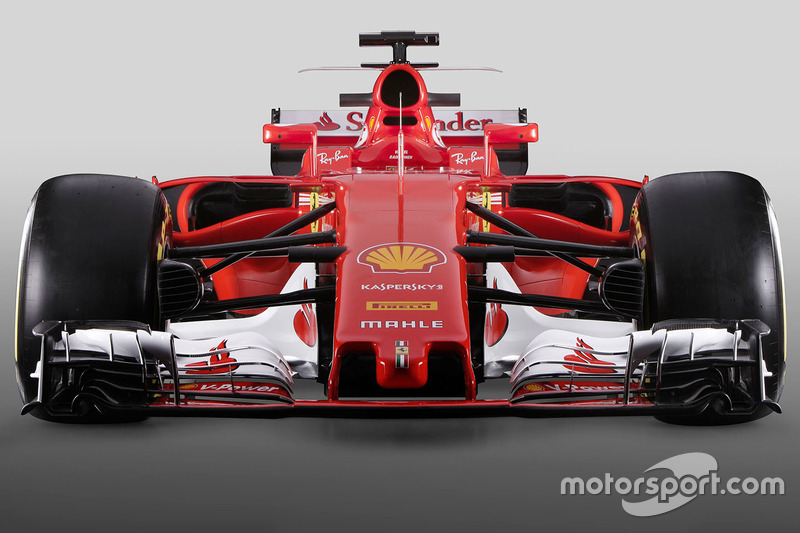 The sidepods are taller than those presented by the other teams, which is intrinsically linked to the integration of the airflow conditioners.

But this works well as a package, as the high/wide positioning of the inlets puts them clear of the suspension elements, which would ordinarily encumber airflow to them.

The team has clearly worked hard on repackaging the internal components of the sidepods, with the radiators the most important aspect of these changes. The SF16-H underwent drastic changes in this respect in order to accommodate the changes that were made to the power unit as a way of increasing competitiveness.

However, the use of multiple charge and intercoolers may have led to even more complications than were necessary. It seems therefore that work done by the power unit department may have helped reshape the aero philosophy, too.

The tall sidepods quickly taper down [15] to the cooling outlet at the rear of the car, which sits between the rear suspension wishbones. The extreme sculpting under the inlet also allows for a cavernous undercut all the way to the coke bottle, which should help to maximise performance as well.

The wing mirrors [12] are placed on tall stalks that are complemented by a secondary stalk, which is very similar to what Mercedes did last year and will work the air as it passes by.

It's not radical but the shape of the airbox [14] has changed and the size has increased slightly when compared with last year as the team looks to supply enough air to the engine, which has been radically updated for 2017 in line with the scrapping of the token system.

Ferrari faced several issues with their gearbox last season with an issue with installation stiffness, causing flex, identified as the weakness.

It was assumed that with the increased suspension loads that will be present in 2017 the team would have rethink its rear suspension layout, limiting the gearbox issues further.

However, it seems the team is confident relevant structural changes have been made as the rear suspension geometry appears to be very similar to last year [16].

The engine cover is supplemented by a shark fin, something that has been found of most of the cars launched so far, owing to how it provides stability and additional downforce in yaw, given the lower rear wing position for 2017.

Affixed to the rear section of the shark fin is a T-Wing [17], like we saw presented on the Mercedes W08, which sets about improving the rear wing's efficiency.

The T-Wing sits in a regulatory box that served little to no purpose under the old regulations but given the lent back attitude and lower overall height of the rear wing for 2017 it suddenly appears to have a purpose.

The rear wing is fairly unremarkable and will likely have several changes made to it in the opening rounds of the championship but what is interesting is that the team has opted for a twin swan-neck pillar arrangement, rather than a mono pillar.

Ordinarily the monkey seat [19] would sit in close proximity to the exhaust outlet but given that the rear wing is now lent back, it requires that the appendage be placed further back, in order to work with the aerodynamic upwash structures.

Ferrari is the only team to present a design showing a monkey seat winglet so far, but that's not to say others won't use them at high downforce circuits.

Overall, while the SF70-H isn't as aggressive as the Mercedes W08, it is impressive nonetheless, with a holistic approach taken that has seemingly been missing in other Ferrari challengers of recent years.