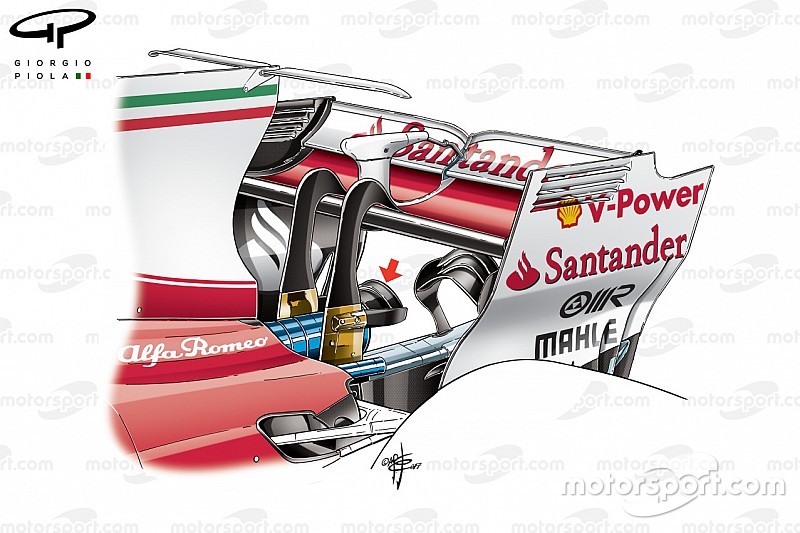 Ferrari arrived in Russia buoyed by its early-season form and must now be considered a real threat to the dominance that Mercedes has had over the last three seasons.

The team made revisions for Russia as it looked for a little more downforce and stability from the rear of the car, incorporating two monkey seats.

The first of these monkey seats (arrowed) could be found attached to the rear wing mounting pillars. It's worth noting that Ferrari is the only one on the grid to utilise a twin pillar configuration.

The pillars, which flank the exhaust outlet, are covered in gold leaf to reflect the heat being generated by the exhaust, whilst the monkey seats mounts have also been treated.

The actual winglet part of the monkey seat is arched to match the shape of the exhaust and will interact with the plume being generated, redirecting it in order that it interacts with the surrounding flow structures more effectively.

The secondary monkey seat rests a little further back down the crash structure and features three flaps, rather than the two we'd ordinarily see utilised by the team.

This monkey seat is also heavily sculptured, taking the exhaust's interaction into account but deliberately working a different point in the flow stream.

This video shows the effort made by Ferrari to vent heat created by the brakes out of the brake drum.

The team has various configurations available for each circuit, enabling it to maximise the thermal interaction between the brakes and wheel rims - which in turn creates the necessary reaction from the tyre compound, improving their operating window.

The video shows the maximum brake cooling configuration used so far, with the upper slot often closed off at circuits that demand a more finite interaction.

Ferrari success shows you can win without Newey - Massa