Formula 1 action was renewed after the summer break, with both Mercedes and Ferrari embroiled in a technical battle at the track, on the pitwall, back at the factories and behind the scenes with the FIA.

The latter is of strategic intrigue going into the second half of the season, as the teams and governing body are all looking to reign in the competitive advantages already gained.

As such, Mercedes looked to Spa as a way of taking advantage of the wording within the latest technical directive related to oil burning techniques, as it furnished both of its drivers with the last in their penalty-free allocation of ICE, turbochargers and MGU-Hs.

This is a pretty big deal as it means that Mercedes now has a pool of internal combustion engines that are able to operate at the upper limit of the oil burning target set out by the FIA in the first half of the season.

This dodges the oil consumption reduction set to be introduced at the Italian GP, with a more restrictive limit and peripheral parameters already put in place for 2018.

These oil burning techniques may be frowned upon in some circles, but the wording of the regulations permit their use and, just like many of the other technical infringements that have come before, the teams and manufacturers have worked hard to outdo one another.

After all, burning oil as part of the combustion process is not a new trick for a sport reliant on finding the tiniest of performance margins, rather one that has been continually pushed in order to get the most from the current crop of power units - improving performance and reducing fuel consumption.

Oil consumption rose sharply when the power units first came into existence in 2014, as the ICE was asked to deliver similar performance levels to its V8 counterpart even though it had been downsized and would use less fuel.

The close bond between engine manufacturers and the lubricant and fuel suppliers has been part of the catalyst for everyone's pursuit of more exotic solutions since and helped to improve the performance of the lean-burn technology that everyone is striving for.

As such, the FIA has made an emboldened statement on how it sees things moving forward, restricting use and dampening the performance that can be gained.

However, the introduction of a new, perhaps even more potent ICE by Mercedes at Spa, means the team can continue to push up to the 1.2L/100km that has been in place for a little while now.

Of course this is based on a calculation of the remaining life/mileage in each drivers' pool of ICE.

Should either suffer a terminal failure ahead of schedule, it puts an onus on the remaining units to take up the slack or face a grid penalty to install a new unit, which will also have to fall in line with the new oil burn restrictions.

Mercedes has since suggested that its data confirms it stayed within the lower 0.9L/100km consumption level for the Belgian GP, although that doesn't rule out the possibility that it can or indeed will run up to the higher level if needed in future races.

Ferrari, having had the same option of introducing its last free ICE in Spa and taking advantage of the 1.2L/100km ruling, opted not to do so, with suggestions that the manufacturer has plans to introduce a new specification at Monza, or even later, that takes advantage of a new 3D printed piston design.

Of course, this ICE will be subject to the more stringent oil consumption target but gains made with the materials and construction of the new pistons and ancillary components are expected to exceed that performance benchmark.

Furthermore, it comes after another strong showing by the FIA, as it requested that Ferrari remove a supplementary oil tank from the SF70H in Azerbaijan. 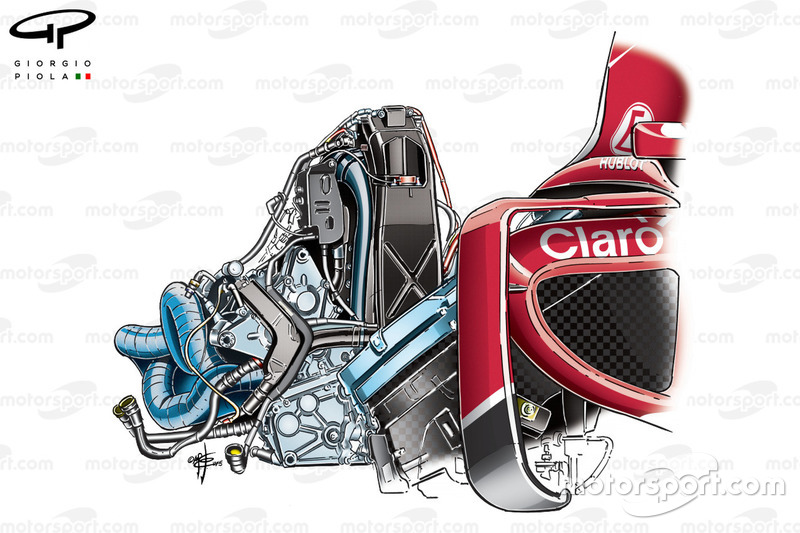 The tank which is believed to have contained a different grade of oil to the main tank at the front of the engine (above, from 2015) would deliver the oil on request by the driver to the system - similar to the 'oil bomb' that has been referred to by Renault in the past.

It's thought this allowed Ferrari to deploy a more aggressive engine map, increasing performance when needed, whilst retaining engine longevity when not. In any case, it is a loophole that has been closed for 2018 as article 20.3, which has been added, suggests that no competitor may use more than one oil in a given engine during an event.

The removal of this system, although not absolutely pivotal in the operation of the power unit, clearly has a performance impact and likely derailed the intended development path.

However, it's also likely Ferrari was continuing a tandem development path, albeit dulled in comparison, as Haas seems unaffected and unable to take advantage of the sub-system.

Mercedes didn't have a raft of aerodynamic developments available for Spa, as some might have expected. However, it did make the best of what it has got, making changes to tailor its car to the circuit's characteristics.

The front wing's upper flap was trimmed back as the team looked to balance the car, having already selected a low-downforce 'spoon' shaped rear wing.

This change and the several that have preceded it in the run up to the Belgian GP are investigated in this 2D animation.

Ferrari's aerodynamic development has seen the Prancing Horse at quite a canter this season and continued unabated in Belgium. 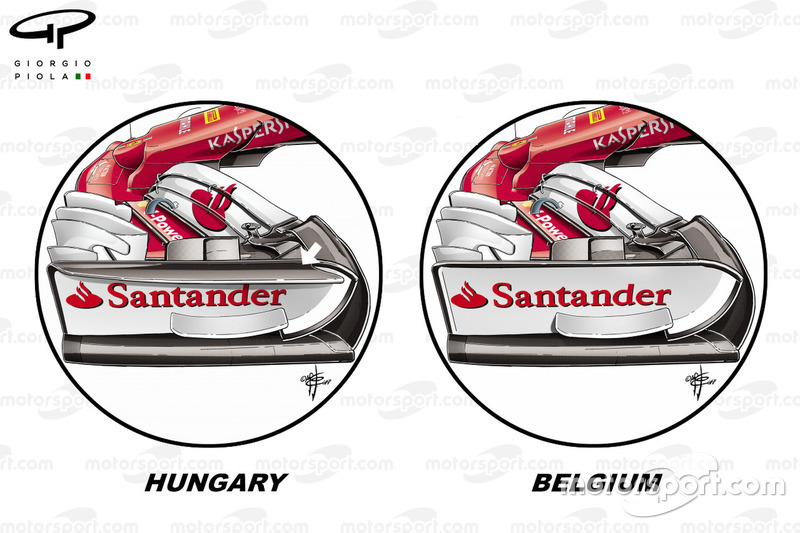 The front wing introduced at Spa and likely carried over for use at Monza has seen the triangular flap on the top edge of the endplate removed.

The flap, along with several other surfaces, is responsible for moving airflow around the front tyre, shaping the wake it generates and improving the performance of surfaces downstream.

On a circuit where top speed is critical, the wake shaping created by these surfaces will be different and so changes must be made to counter this, otherwise the car will become inefficient at the high speed. 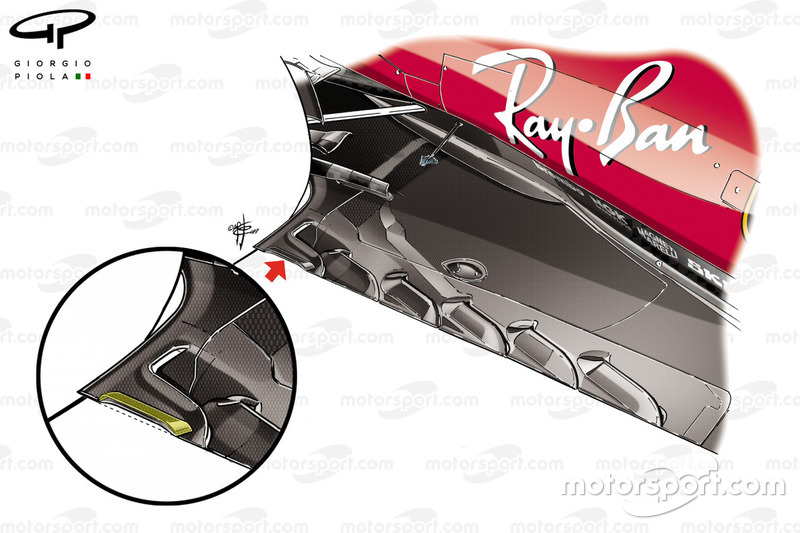 The changes made to the front wing were mirrored downstream, as the team made a change to the floor ahead of the rear tyre.

It's an area of intense development for the entire grid this season, with the structure of the tyres changed for 2017, along with the diffuser dimensions, the issue of 'tyre squirt' is having to be readdressed.

It's caused by the ingress of airflow into the diffuser's path and exacerbated by the deformation of the tyre, meaning it's a transient issue that is also altered by the prevailing pressures selected by Pirelli and the nature of the circuit being visited.

Teams place slots and strakes ahead of the rear wheel in order to limit the issues caused by the phenomenon, something Ferrari has been particularly proactive in changing over the course of the season.

Having started with just three L-shaped slots, the team has tried numerous variations in the preceding races before making another change for Spa.

The outer edge of the floor (arrowed and inset) has been updated and now features a fluted shaping, as depicted by the dotted line.

On top of this, a longitudinal flap resides (highlighted in yellow), harnessing the new shape and forcing the air to react differently depending on the velocity of airflow passing around the section.

It's not something entirely new, as Mercedes has run a very similar design on the edge of their floor since Barcelona (below). 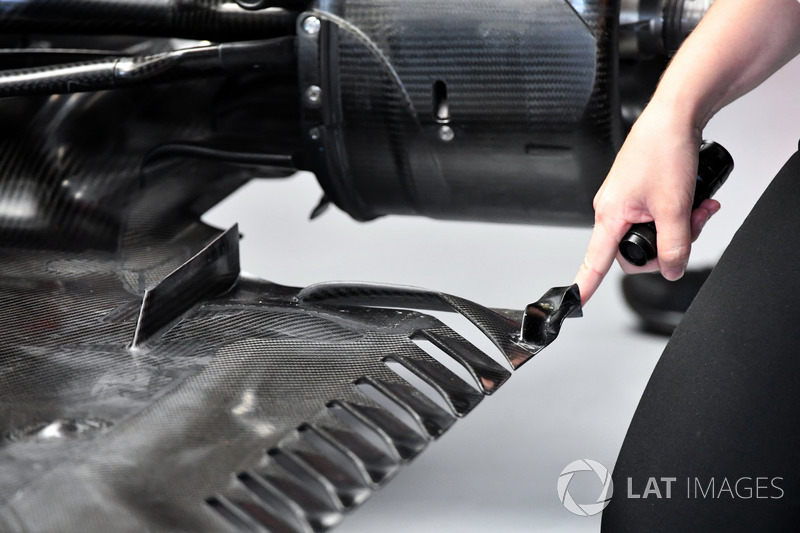