The Singapore GP has always been somewhat of a happy hunting ground for Red Bull, as the tight, twisty street circuit plays into the chassis-dominated ethos that it employs.

Dominating all of the free practice sessions, it was clear that the RB13 was not only suited to this circuit but has come on leaps and bounds throughout the season.

Teasing Adrian Newey back into the fold could be considered pivotal to this, with the aero guru's attention previously split between his commitments to Red Bull Racing and other projects, such as the Aston Martin Valkyrie.

Often considered an innovator, he also recognises the merits of taking design inspiration from others and making it work to his and his team's advantage.

As such, he's often seen wandering up and down the pitlane checking out everyone else's cars and sketching in his red notebook.

They say that imitation is the sincerest form of flattery and so Ferrari should feel pleased that Red Bull has taken onboard one of its designs, something even Sebastian Vettel felt the need to highlight in his post-qualifying interview, when he jokingly proclaimed: "This is ours, looks like a copy, no?" 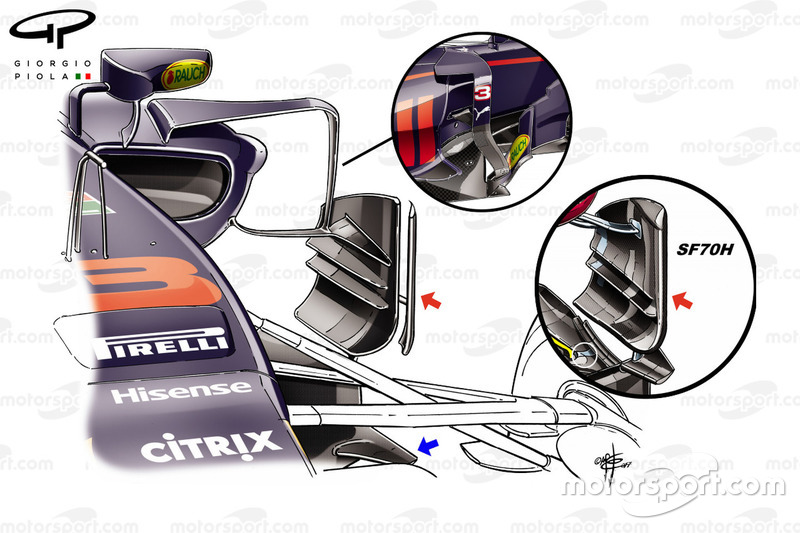 He was, of course, talking about the new sidepod deflector that Red Bull mounted to the RB13 for Singapore.

The deflector, which does bear more than a striking resemblance to the one used by Ferrari since the start of the season, is placed in a position that many other teams have started to frequent, either in this format or in a similar multi-element fashion to what Mercedes started the season with too (below).

The inclusion of this new deflector by Red Bull has heralded several other changes as a consequence, the bargeboard has been amended, with an axehead found extending out from it (blue arrow), while the airflow conditioner that ordinarily extrudes upward from the floor (inset) is intersected by it.

Now while the Ferrari and Red Bull deflectors may initially look like twins, there is one major difference, with Red Bull opting to discard Ferrari's more blunt leading edge in favour of a leading edge slat (red arrow), which is likely a consequence of differing flow characteristics ahead, as Red Bull looks to have the deflector work across a wider speed threshold than if it had adopted the same design as Ferrari. 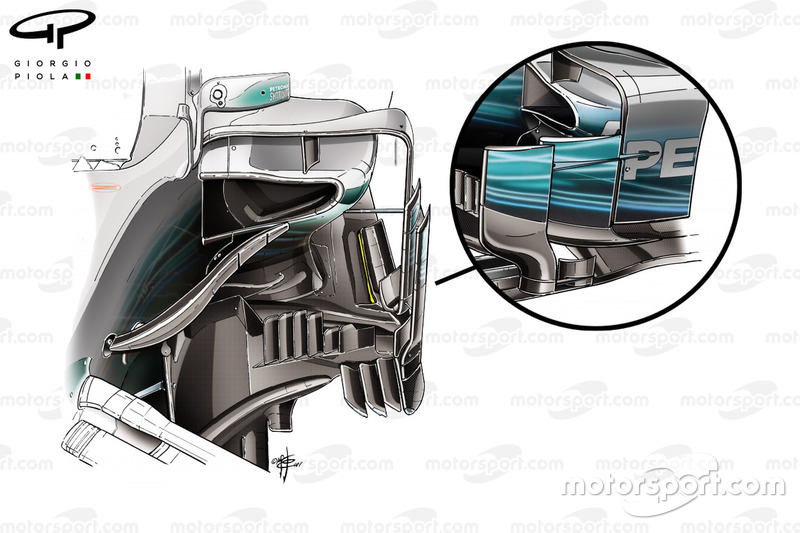 The game of assimilation was not isolated to Red Bull in Singapore though, with Williams sporting a new set of deflectors that follow a similar design philosophy to Mercedes, albeit not as complex. 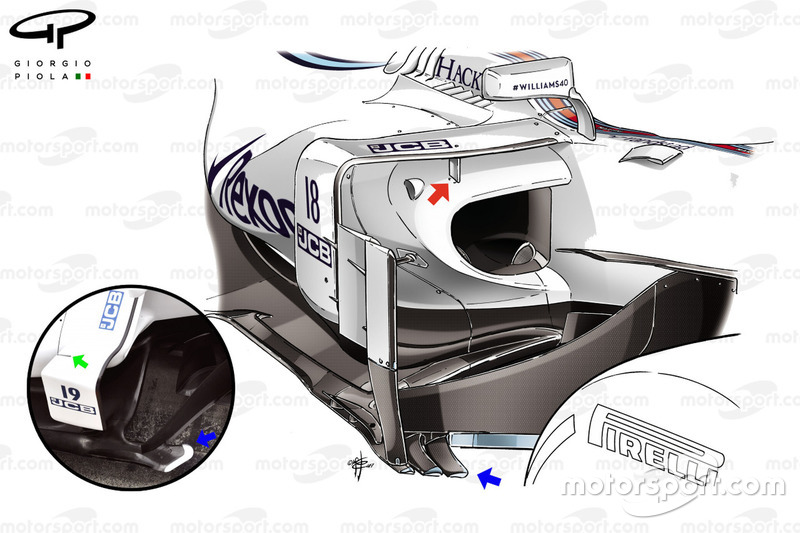 Like Red Bull, the changes made by Williams culminated in the redesign of the airflow conditioners too, as the new configuration's forward-most deflector is anchored to floor's axehead.

This is another surface that was optimised as part of the new package and now features three distinct sections, rather than one (blue arrow).

The displacement of the airflow conditioner to a more inboard and rearward position has meant that the small slot, which mirrored the floor slot below for legality purposes, is no longer needed (inset, green arrow).

To help maintain the airflow conditioner's rigidity and also act as a vortex generator, a small vertical tab now resides atop the sidepod too (red arrow).