The tech tweaks that made Red Bull unbeatable in Monaco 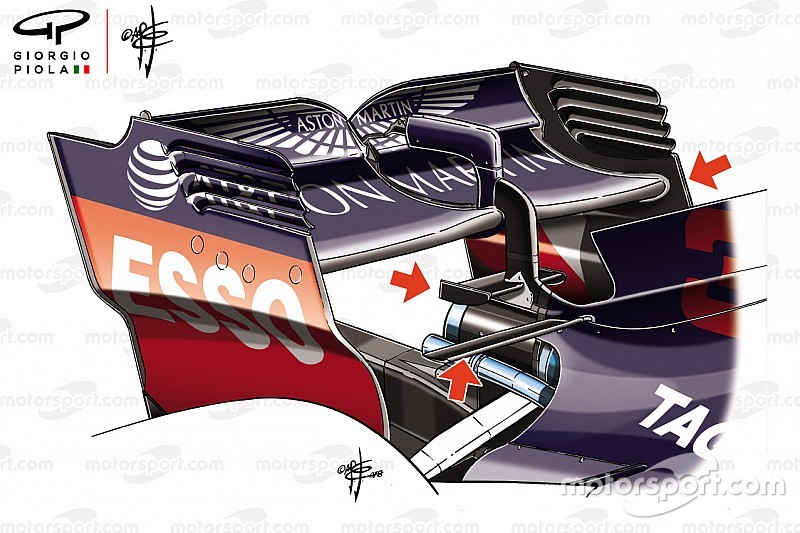 Red Bull knew when it arrived in Monaco that it would have perhaps its best chance so far this season of a strong performance – with the tight street circuit perfectly suited to its chassis/engine package.

One important factor boosting its confidence levels is the fact that the RB14 is estimated to be at least 20cm shorter than Mercedes, which would make it more agile and better suited to the tight and twisty street circuit.

On the back of a major update that arrived at the Spanish Grand Prix, the Milton Keynes-based went even more aggressive with its downforce push for Monte Carlo.

Monaco marked the first time we’ve seen Red Bull use a T-wing this year, with the team having entered the party late last year when there was more freedom in terms of their placement.

In order to get the best from it amid F1’s 2018 restrictions, the winglet’s inboard end is angled differently to the main profile, which creates an increase in downforce in its own right.

The monkey seat winglet has to abide by the new-for-2018 regulations which means such appendages can only lie ahead of the exhaust’s tip. This is in order that it cannot be influenced by exhaust blowing.

The Red Bull winglet is relatively simple and doesn’t feature an aggressive camber angle, although it does feature endplates. These alter the winglet’s aspect ratio and increase its effect on the exhaust plume - improving its relationship with the rear wing.

These changes, allied to the large-scale update at the last race in Spain which included front wing, bargeboards, floor, sidepods and airbox, resulted in Red Bull being dominant in Monaco.

Daniel Ricciardo was quickest in every session and won the race, despite lacking around 160hp when his MGU-K failed early on.

That he was able to hold on was testament to the strengths of the Red Bull chassis, which has clearly shown some impressive progress in recent weeks.

The team has long had some very different concepts to other teams, which includes its approach to sidepods, as is clearly shown in the video above.

The story behind the Ferrari ERS scandal