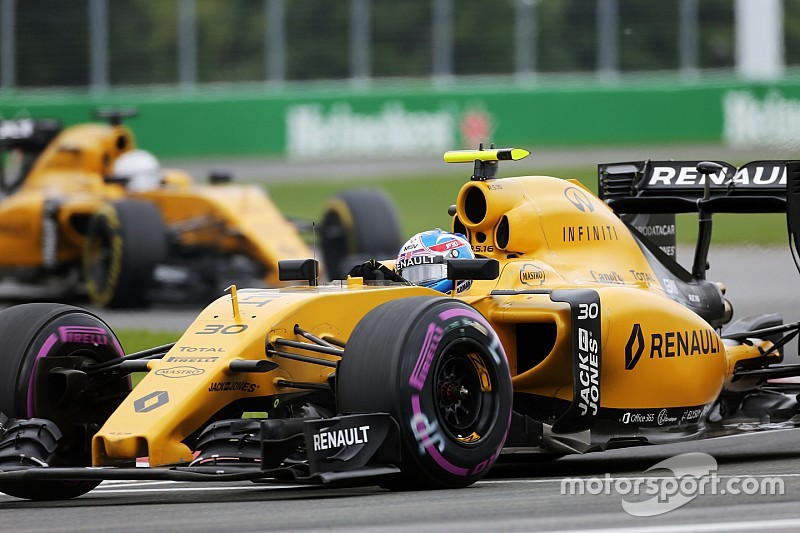 Motorsport.com asked Rémi Taffin, Director of Operations at Renault Sport F1, to explain what are the MGU-K and MGU-H, both essential components of a Formula 1 turbo hybrid Power Unit.

In 2014, Formula 1 introduced a new set of technical regulations that required all engines to be turbo hybrids. Turbocharging is a way to use exhaust gases to spin a compressor that will feed more air and fuel into the engine’s cylinders. Hybrid technology uses an electric motor to assist the petrol engine.

In other words, F1 cars are now powered by Power Units of small displacement, but capable to producing large quantities of energy.

“The MGU-K is very similar to what is found in the so-called hybrid production cars”, Taffin told Motorsport.com during the Canadian Grand Prix in Montréal. “In F1, we have an electric motor that is connected to the petrol engine. During the braking phases, it recovers the energy that is normally lost in heat. We now recover a good part of that kinetic energy that is then stored in a battery. The MGU-K can work in both directions: to recover or to supply energy.”

The French engineer then explained what the MGU-H is, the unit that is connected to the turbocharger. “The MGU-H is more of an F1 thing. We have started to see a similar device in production cars. It’s called an e-turbo, and it is designed to spin the turbocharger at lower revs.”

Taffin continues: “In an F1 car, the MGU-H works like the MGU-K, meaning that it works both ways. It can recover energy from the turbo, store it, and then use it to spin the compressor. If you look at a turbocharger, you’ll find a turbine at one end, and a compressor at the other. The exhaust gases are used to spin the turbine, which spins the compressor. The MGU-H is located in between the two. So when the hot gases spin the turbine, it also produces electricity that is stored in the battery. And when the car accelerates, the electricity is used to spin the compressor, providing immediate power. There’s no turbo lag. Power application is immediate, like with any normally aspirated engine.”

Taffin talks about the batteries: “There is just one battery in the car. Even if electricity comes from various sources, it’s all stored in one place. The sole battery is flat and is located inside the chassis, underneath the fuel cell. We [Renault] now produce our own MGU-Ks, MGU-Hs, batteries and controllers. Because of their involvement in Formula E, Renault had a solid knowledge of the electric technology and their engineers were able to help us.”

The MGU-K and MGU-H deliver a solid boost of power to the small 1.6 litre petrol engine. During another interview, Toto Wolff, Director of Mercedes-Benz Motorsport, stated that the German Power Unit was able to produce close to 1,000 bhp.

Taffin admits that power delivery has greatly progressed since the early days of the Power Unit back in 2014.

“Power delivery of the stored energy is now performed around almost the entire lap,” Taffin confessed. “We have reached outstanding levels of overall efficiency. Today, the MGU-K is capable of producing 120kW, which is the equivalent of 160bhp, around almost the entire lap. The moment the driver steps on the gas pedal and we are no longer grip limited, it applies full power. It’s no longer if the driver wants to use it or not. The power is available. It’s all controlled automatically.

“The driver can basically choose between two modes. He can have full power around the entire lap to set a good qualifying time, for example. However, the driver can use a race mode to get maximum power on the straightaways. His lap times won’t be as good, but he will have some extra power to pass other cars and to defend himself and not be passed.”

Taffin confirmed that the 1600cc petrol engine is far from being fully developed.

“It’s essentially the efficiency of the small petrol engine that needs to be optimised. The electric components are already extremely efficient. We’re talking 95% efficiency here. The battery is also every efficient. So it’s the V6 engine that has the biggest margin of development. We fill the car with 100kg of petrol. We need to increase the level of efficiency of the petrol engine to maker better use of that large quantity of fuel. There are huge gains to make in that domain. There is a lot of room for improvement.”