Celebration time in India for Sebastian Vettel and the Red Bull team.

After each race thus far this season, Vettel gives credit to his engineers, to Adrian Newey, and the rest of the Red Bull team after each race whether they win or not. However, he has won 10 of the 19 races this season with three of them yet to be contested. With today's win, Vettel now has six consecutive wins.

"It’s been such a phenomenal season. I think the team and the spirit inside the team is so strong; I said it on the radio already – it gives me so much power," said Vettel. 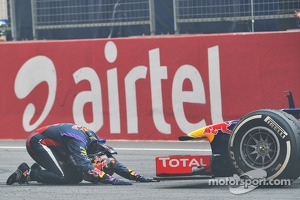 The German even shows affection to his RB9 powered by Renault while in Parc Ferme. Today he celebrated with "donuts" on the circuit, and bowing to his car.

At the end of the Indian Grand Prix today, Vettel not only won the race, he also earned his fourth Drivers' title and the Constructors' championship for Red Bull.

It was not an easy start as he had to make an early pit stop due to starting on the soft Pirelli tyres he used in Q3 to clinch the pole position. But as usual, he made up the ground for the victory.

Vettel commented, "I want to say a big thank you to the team to all the people behind us. It was for sure not an easy season and even though people on the outside thought we had it in our hands, I think it was difficult."