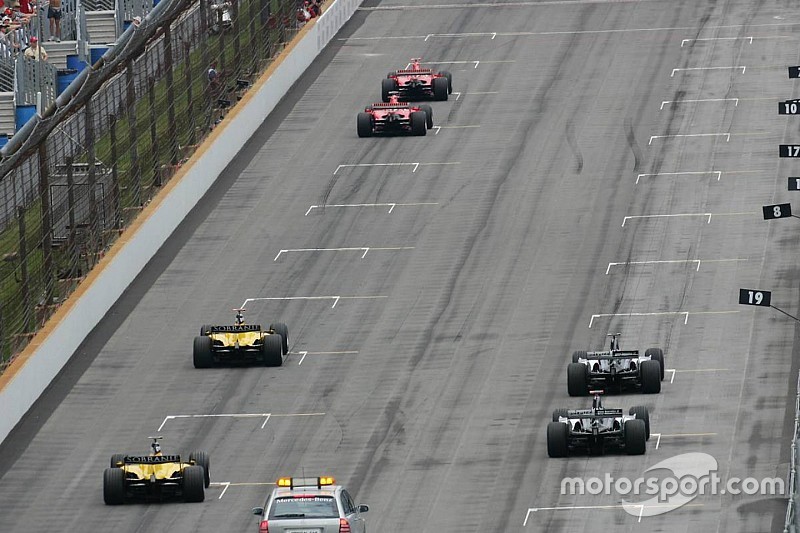 This story was written in 2005 and was a detailed look at the highly controversial FIA Formula 1 United States Grand Prix, immediately after it took place.

INDIANAPOLIS, June 21, 2005 – Let’s pass blame around for this debacle at Indianapolis Motor Speedway in what was intended to be the sixth annual US Grand Prix here.

It turned out to be a six-car show with only Michael Schumacher’s intimidation of teammate Rubens Barrichello while exiting the pits from his second stop to excite any one of the remaining fans at the Brickyard.

It’s estimated the Speedway had 130,000 on the grounds before 1PM EST but they began filing out shortly after the “start."

This “race” was a yawner after all 14 Michelin-shod drivers retired before the official start, completing only their formation lap. All, including polesitter Jarno Trulli went immediately to their garages.

Start the blame game with Michelin, who did not fully study the changes to the road-oval circuit after resurfacing and subsequent diamond grooving between the 2004 Brickyard 400 and the Indianapolis 500.

In pre-May tire tests, Firestone engineers noticed significant degradation to the Firehawk slicks and requested the grooving, which was performed.

Firestone minimally altered their specifications and, while there were some incidents in Turn 1 – which was Turn 13 this weekend going the clockwise, rather than counter-clockwise direction – those incidents could not be fully blamed on tire construction.

Bridgestone ultimately had more data about the circuit than did Michelin and used it wisely. Noted for their reliability more than performance, the front-line Bridgestone runners (Ferrari) were noticeably slower in practice and qualifying but expected to get better wear over the long haul. Still, Michael Schumacher’s Ferrari mechanics, on his lap 25 pit stop had a long look at the left rear tire.

Memories of Kimi Raikkonen’s Michelin tire implosion on the Nurburgring are still ripe in the FIA’s mind, or at least they were June 1st when Mosley penned to teams, “It should not be forgotten that a mechanical failure at high speed may involve a degree of risk to the spectating public.

“If you,” meaning the teams, “are in any doubt about your car, you should always call it in. If you are still in doubt after checking the car in the pits, you should retire it from the race,” Mosley intoned.

On the same date he addressed his tire suppliers, Bridgestone and Michelin and asked them, in essence to produce tires that are “reliable under all circumstances, including prolonged periods under the safety car, off-road excursions, abuse on curbs, contact with other cars and contact with debris on the track.”

This statement came out for a series with regulations that limit tire use to one set for qualifying and race?

The FIA, knowing that a Sunday settlement was best for the sport chose to chide Michelin for its less-than-optimal tire construction for this track; Bernie Ecclestone placed blame on the Indianapolis Motor Speedway for its resurfacing (and, in his mind mediocre marketing) job; Ferrari chose not to go with the balance of the grid who agreed to a proposed chicane in the area of Turn 12-13 that would have slowed the cars sufficiently (or so Michelin claimed) to keep rubber beneath them.

Instead these three stuck their heads in the sand and allowed Formula One to become Formula Farce in the largest worldwide market for its commercial holdings. In the middle of this FIA president Max Mosley was back in the UK when he could have used his private jet to come to Indy and straighten out the mess.

But Max declined to make an appearance, leaving Charlie Whiting in charge of the rebelling troops; he was giving proclamations from the safety of several thousand miles of water separating the US from the UK. Cowardice? Surely.

With nine of ten teams intent on a solution, Max Mosley could have kept dialog opened but chose to make threats: race with the chicane and there will be no points (and presumably no Euros either). Not one of the band of nine cared at that point, preferring to produce a show for the fans on hand.

Mosley reportedly upped the ante: race and I’ll shut down all of North American motor sport – at least those organizations that race under the FIA umbrella. The latter was more than Indianapolis Motor Speedway CEO Tony George could handle; he took minimal revenge by refusing to throw the checkered flag for Michael Schumacher and boycotting the podium ceremony.

The lack of a race cost F1’s commercial partners a huge amount of money on Sunday. There were plenty of US-based firms involved who could not have their names and products promoted throughout the two-hour television program: Hewlett-Packard, Budweiser, FedEx, Intel, Mobil 1, Sun Microsystems, Kenwood, Ray-Ban, Oakley, Time Inc. come to immediate mind.

The only reason Paul Stoddart allowed his Minardi pair to “race” was that Jordan Grand Prix broke the earlier pact and decided to compete, such as it was. The Aussie stood firm in his support of the Michelin teams, believing he was “racing the FIA way,” as the post-race press release aptly stated.

'Didn't have a choice'

The drivers wanted to be on the track but had to sublimate their beliefs to those of the team owners and tire supplier Michelin. “It’s disappointing we can’t race,” BAR-Honda’s Jenson Button said, “but we’re not going to race if it’s not safe.” Nick Heidfeld of BMW Williams postured, “I am sorry, but we didn’t have a choice.” “We are drivers,” admitted teammate Mark Webber, “and we want to go but it is not safe for us.”

As the decision came down leaving the grid at the stroke of 1PM EST Toyota polesitter Jarno Trulli noted, “I feel that the decision is bad but we all knew we were in danger for us as a team, as a driver and for the spectators. So we had to stop. I’m frustrated not to be driving.”

Substitute teammate Ricardo Zonta, who had his own accident in Friday practice and was replacing Ralf Schumacher “would have liked to race but in the conditions we had today, it was really, really risky.” Red Bull’s Christian Klien called the decision “Michelin and all the politics of Formula One for why we didn’t race.”

Sauber’s Felipe Massa felt “really bad, but I feel like every Michelin driver. This is bad for the sport.” Had the FIA given all a chance to warm up using a chicane, Massa thought it might have been alright. “We have no choice,” his teammate Jacques Villeneuve expressed. “With the chicane the tire would have been safe; we were just hoping a chicane would have been put in because then we could have raced.”

David Coulthard felt poorly for the fans and admitted he’d be ready to put his Red Bull car to the test, acknowledging his experience would serve well under these difficult circumstances. “The reality is that mature adults were not able to come to a resolution that would have allowed us to put on the show that everyone wants to see in Formula One.”

Kevin Forbes’ crew can place a chicane at the track with ease; it normally takes them less than 15 minutes to effect repairs to the SAFER barriers that line IMS’ 2.5-mile oval.

The fact remains that there was only a six-car points-paying exhibition of minute skill on the Indianapolis Motor Speedway’s 2.605-mile road/oval course this Sunday. People who paid enormous sums of money to be there are asking, begging, suing for refunds.

Finger pointing is going on throughout the racing world over this debacle.

Point straightaway to Michelin for their lack of preparation for this race and their innocence in thinking the FIA would agree to a commonsense proposal to fix the problem.

Digits also go to the sanctioning body for their arrogance, forgetting the CART manner of doing business, in that they are casting away good friends in the hopes of finding new ones (in Las Vegas, perhaps?).

By sitting on their hands, Ferrari must share some of the blame for this apocalyptic event and would be wise to place those fingers close to the source at their rears, letting ego go before sport.

One F1 car from a Bridgestone and Michelin team could have, should have tested before arriving in Indy to anticipate surface changes on a track resurfaced and grooved. Preparations for the “race” might have been stilled for a few hours but the data would evidently have been worth it.

At this point, I don’t think we’ll see F1 in our back yards for a while, unless the Las Vegas proposal finds the “best series in motorsports” in yet another downtown parking lot.

That bastion of independent Formula One teams, Mr. Paul Stoddart of Minardi has requested Max Mosley step down from his post of the FIA. Most likely Mosley didn’t hear Stoddart’s plea – it’s obvious he listens only to the sound of his own voice.