Paolo Martinelli, Ferrari's head of engine development, talks about the new 055 engine "The new F1 engine -- a 90 degree V10 -- which will be used for the forthcoming championship, fitted to the F2005 is called the 055. Luca di ... 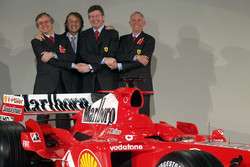 To comply with the new regulations, that stipulate the use of just one engine per car for two races, engine life must once again be doubled, compared with the previous year: we have thus moved from 400 km in 2003 to 700 km last year and now our target is 1400 km. Furthermore, it will be imperative to have performance stability over the entire period of engine life (as engine usage will run to the end of the second race.)

The 055 engine began life as an evolution of its predecessor (called the 053.) A great deal of work in terms of design and experimentation was and will be focussed as a priority, on meeting and maintaining the necessary reliability for this new mission profile. One has to taken into consideration that for many of the engine's internal parts, especially those that move, the 1400 km range is a severe test that conflicts with maintaining performance.

Therefore, most of the engine components have been redesigned and effectively optimised to meet the new targets. The engine will be adapted in terms of "mapping" as a function of the various requirements during the season (I mean for example, the demands of various circuits that come up on the 2005 F1 calendar and the different weather conditions we can expect.)

The 055 engine design project had to meet the following technical demands: * reliability extended to around 1400 km -- as already explained -- while maintaining necessary levels of performance and driveability; *consolidating strong integration with the design of the car, which has led to a functional optimisation of layout of the engine and its accessories.

As for its structural characteristics: the block, heads and other minor castings have been strengthened without any appreciable increase in weight. All moving components are new to cope with the extended life. The Marelli engine control unit has also evolved to meet the 2005 requirements, with new electronic components. It also proved necessary to develop a new fuel and above all, a new lubricant, with invaluable support from Shell, that provides exceptional stability and engine protection.

In terms of performance development, work will go on throughout the season, with evolutionary steps already planned in the programme.

The team of Ferrari engine engineers continues, through the stability of the group, to grow in experience and responsibility, both in design and development (with a strong team of specialists in all areas: combustion, dynamics, bench testing etc.,) and in the running of the engine on the track.

Our engine department has a long history, but it is always heavily orientated towards innovation and improvement in terms of product and work methods. The organisation has been adapted to meet the new aims of the 2005 season.

It is impossible for me to mention here all those involved, but I want to single out Gilles Simon, who was in charge of design, as indeed he was for the previous V10. Supporting him on the development side will be Lorenzo Sassis. Track and reliability testing of the engine will be supervised by Noel Cavey and the race engines will be run by Mattia Binotto. The support of our technology-production side (which we call Meccanica GES) and quality control is also fundamental. It is under the leadership (not just on the engine side) of Mario Almondo.

Finally, no power figure is revealed, but, without wishing to sound repetitive, I can guarantee that again this year, all Ferrari's engine crew will work methodically and with determination to ensure there is "sufficient" horsepower, delivered in "driveable" and "reliable" manner to reach our targets for the 2005 F1 championship. All that remains is to wish all our partners and suppliers a successful year and Forza Ferrari!"