By:
GMM
Listen to this article

Jean Todt has admitted he considered banning Lewis Hamilton for six races after the McLaren driver's racial joke two weeks ago in Monaco. 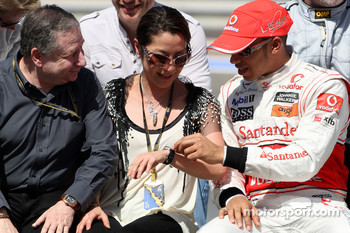 Enraged at having yet more penalties imposed by the stewards during the race weekend, Briton Hamilton - the 2008 world champion - joked that "Maybe it's because I'm black".

Fearing a disrepute charge, the 26-year-old returned to the street circuit late on Sunday to apologise to the FIA, and made a further apology in writing.

"Lewis wrote to me and I wrote to him," FIA president Todt told British newspapers including the Guardian.

"I did not advertise it. It's between him and the FIA. I could have asked our judicial court to address the problem. We never officially opened the case.

"Maybe it would have been a better decision to put him to the court. To ban him for six Grands Prix. But he wrote to me and I wrote to him and the thing is over," added the Frenchman.

I am trying to maintain a good harmony amongst everybody

He showed the correspondence to selected reporters earlier this week, and it demonstrated that Todt rebuked Hamilton in his letter but insisted the matter is closed.

"I am trying to maintain a good harmony amongst everybody," Todt is quoted by the Telegraph. "I have tried to avoid controversy. I could have leaked the letter but it's between him and the FIA.

"(In Monaco) my office was next to the stewards. Every time I went to see them I avoided making any comment. For me what Lewis said was unacceptable but I didn't want to overreact."

Why Hamilton isn't finished with F1 just yet