Todt not surprised by Europe result

Ferrari team principal Jean Todt has not been surprised by the team's success in Michael Schumacher's winning performances in the last two Grands Prix, including Sunday's European Grand Prix at the Nurburgring in Germany. Jean Todt with ...

Ferrari team principal Jean Todt has not been surprised by the team's success in Michael Schumacher's winning performances in the last two Grands Prix, including Sunday's European Grand Prix at the Nurburgring in Germany. 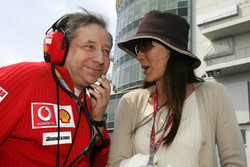 Jean Todt with his girlfriend Michelle Yeoh.
Photo by xpb.cc.

"I knew, since the beginning of the season, that we have a very strong car," said Todt. "Coming to Germany, it was important to be competitive, to be a potential winner. But it's so tight, there's so little difference from being on one side or the other."

"So I knew that we were going to be competitive like I knew from the beginning of the season that we had the potential to do a good season. Unfortunately, in mainly the second and the third Grand Prix, we did not do a very good job, so we paid the price for it, but in a way it was our mistake, not the others if they did a better job than we did."

Todt even saw advantages that Michael Schumacher was chased to the chequered flag by Fernando Alonso, and Kimi Raikkonen wasn't far behind. "It's good for the championship to have big competition," said Todt.

"For us, what does matter is that finally we can score important points, we can win races and maybe a few strong teams can go in the same direction in the future. But saying that, it's not a surprise to see at least three very strong teams in the championship at the moment."

Todt, however, sounded a note of caution. "What is true today, considering the input of the teams, may not be true in five Grands Prix's time, because we know how important it is to develop the car during the season. It will be very important to make a significant development possibly for each Grand Prix."

And Todt certainly wouldn't discount either McLaren nor Honda challenging Ferrari and Renault. "McLaren are very strong. When you see that Raikkonen made his first pit stop on lap 23, he had between 10 and 15 kilos more than the others, the cars in front, which means he did a very good lap time in qualifying."

"And then he finished the race four seconds behind the winner, so this time it went not so much in their favour but next time it could be in their favour. And Honda is very strong as well. As I said before, they can make some strong development and be strong contenders as well."

Michael Schumacher's new teammate, Felipe Massa, finished a strong third, making his first visit to a Grand Prix podium, but Todt wasn't surprised by this performance either, citing previous performances. "He did very well in Bahrain, he was on the front row, then he made a little mistake and the team made a very big mistake, so he probably lost fourth or fifth position.

"In the second race, he started last on the grid and he finished fifth. It was a very good race, maybe a better race than this one. And in the third race, as I said several times, we make a mistake in the choice of the tyres and then he didn't race because he was taken off by two cars at the start."

"In the fourth race he lost a place in the pit stop and finished fourth and here he's finished third, so I think he's doing a very good job. I'm sure it helps him with the pressure that he has, gives him confidence. For me, he's already strong and calm."

However, Todt wouldn't compare Massa's pace with that of Schumacher or Alonso. "I think we have three drivers in this championship, who have something a bit more than all the others and I think Felipe is amongst the best behind those three drivers."