Too early for Toyota to win?

Toyota surprised many in the Malaysian Grand Prix when Jarno Trulli took the team's first ever podium in second place, but the Italian thinks it's too early to think about winning a race. Toyota was competitive at Sepang, where Ralf Schumacher also ...

Toyota surprised many in the Malaysian Grand Prix when Jarno Trulli took the team's first ever podium in second place, but the Italian thinks it's too early to think about winning a race. Toyota was competitive at Sepang, where Ralf Schumacher also bought home some points with his fifth place finish, and for the moment the goal, along with top three results, is steady improvement. 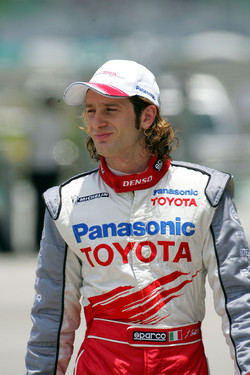 "Our target is aiming for podiums but mainly to show signs of progress, scoring points and doing a nice and flawless championship" said Trulli during Thursday's FIA press conference at Sakhir.

"At the moment, I think the results me and Ralf had in Sepang was an extremely good result and gave a good boost to the team but I think it's too early to talk about winning races. I don't think we are ready yet."

"We have a good car, a good baseline and it is all up to the team and the potential we have to develop the car because we've got an extremely experienced team out there."

"Some of them, like Renault, are definitely quicker than us at the moment but we are on the way up, so at the moment it is impossible for us to predict when the first victory is going to arrive. It may be this week, it may be in one year, we don't know but we are working to the top of the list and hopefully it will happen soon."

Toyota president John Howett said the team had been working very hard and Malaysia had given everyone a boost. "I think they felt that we had been knocking on the door of something like this and probably haven't demonstrated the full capability of the whole team and therefore they are delighted, so they're putting even more effort in," he remarked.

Given Toyota's performance in Malaysia it would perhaps not be a surprise to see Trulli or Schumacher on the podium this weekend. However, while Trulli is anticipating a good race he is not about to try and predict what the outcome may be.

"The temperatures are high here, there are similar conditions to Malaysia so we are confident," said the Italian. "But… until we get on track and see where we are and see how our car and tyres and chassis and everything works, we cannot predict anything. The only thing I can say is that we remain confident. I like the circuit and we will see."

F1 returns to Europe after Bahrain and the next race on the calendar is San Marino, towards the end of April, where teams usually introduce new developments. "We have improvements on both chassis and engine for Imola and we have a clear programme," said Howett.

"I think we're trying to accelerate as hard as we can to get more but I guess every other team will be doing the same. It is that relative performance that makes the sport so enjoyable and so thrilling."