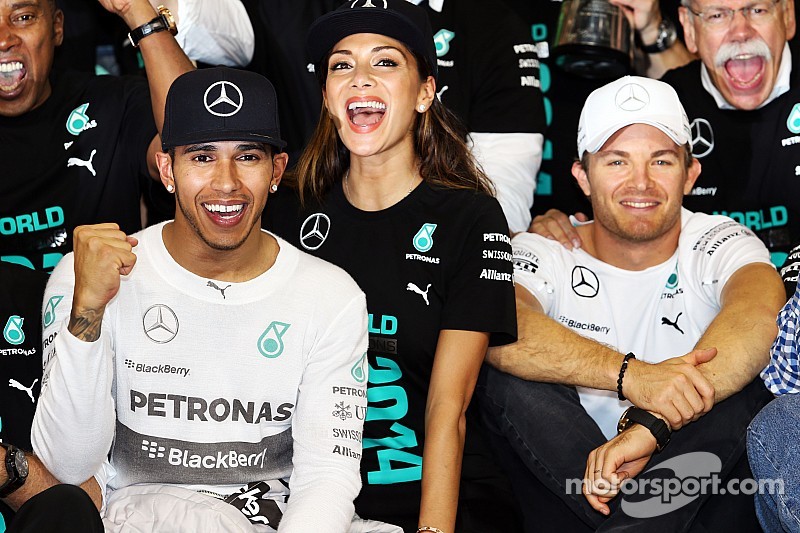 Looking back over the 2014 season, the intense battle between Mercedes team mates Nico Rosberg and Lewis Hamilton, and it was made even more interesting with a double points finale.

As dominant as Lewis Hamilton’s 2014 Formula One season was, the fact that he didn’t clinch his second title until the finale in Abu Dhabi was fortuitous for the series, even though the contrived “double points” gimmick in the final event kept Mercedes teammate Nico Rosberg, who had won five races – half as many as Hamilton – in the game until the end.

That said, Hamilton put an exclamation mark on his season by winning the Abu Dhabi finale, giving him a startling 11 victories for the year. Hamilton hit a slump, if you can call it that, between his May 11 win in Spain, and his September 7 victory in Italy, winning only one of the seven races in between as Rosberg and Red Bull’s Daniel Riccardo won the others, thinking, briefly, that Hamilton had peaked.

Once Hamilton began winning again in Italy, he lost only one of the last seven races, to Rosberg in Brazil.

With only three winners the whole season, Ricciardo was certainly best in class, as teammate Sebastien Vettel, winner of the last four championships, had no wins and was lucky to beat out Ferrari’s Fernando Alonso for fifth in the championship points. Vettel, of course, is moving to Ferrari in 2015, to replace Alonso, who heads to the McLaren team, and its new Honda engine.

With only three drivers, racing for two teams, managing to find the checkered flag in 2014, Formula One has to hope for a little more parity in 2015, though there seems no real reason to believe that Mercedes will develop some sort of weakness over the off-season, or any other team will discover the magic bullet that will puncture a second straight Mercedes title.

In a normal year, Rosberg’s five wins could have earned him a title, but the fact that his teammate had more than double that number of wins – well, it could be a long year for any team not named Mercedes, or at least running one of their engines.