The rumour was first reported by Germany's Auto Motor und Sport just after Christmas, on the heels of the teams' split from the association FOTA.

The report quoted Ferrari president Luca di Montezemolo as revealing that negotiations over the next Concorde - with the current one set to expire at the end of 2012 - will begin "in January".

It is believed Ecclestone favours the 'divide and rule' tactic - with the most powerful teams offered lucrative deals - because it weakens the ability of the other teams to negotiate a proportionately higher share of F1's income. 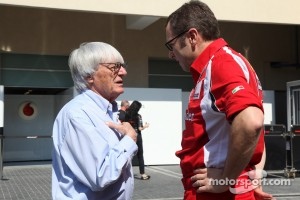 Ferrari-powered Swiss team Sauber has also pulled out of FOTA, followed it is believed by the Red Bull sister team Toro Rosso.

"The consequences of the decision by Christian Horner, Luca di Montezemolo and Peter Sauber (to leave FOTA) are huge for the future of formula one," wrote O Estado de S.Paulo correspondent Livio Oricchio.

"The extension of the Concorde Agreement with Bernie Ecclestone will shortly be announced by Red Bull, Ferrari and Sauber," he predicted. "And after that - as always happens when Ferrari takes such a decision - the rest will follow," claimed Oricchio.

Agreed Italy's Autosprint: "Red Bull and Ferrari have come to an agreement with Bernie Ecclestone over the terms of their future participation in the world championship.

"The agreement - not official yet - was made as far back as November."

The report said the FOTA split will force the other teams, including McLaren and Mercedes, to also sign new Concorde Agreements.

"It is likely that, as in the past, Maranello has received some bonus money in exchange for its loyalty until 2017," journalist Alberto Antonini wrote.