Dec.2 (GMM) Three top teams will provide cars so that Pirelli can test its 2014 tyres later this month.

Earlier, some teams objected amid rumours McLaren had put its hand up to run its 2013 car for the official tyre supplier at a December test in Bahrain. 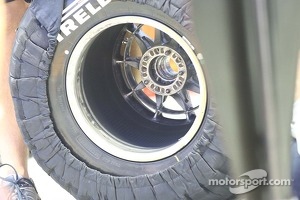 "It would be unfortunate," said Mercedes' Ross Brawn recently, "if one team had the benefit of running a (2014) tyre to the exclusion of all the others."

Now, Italy's La Gazzetta dello Sport and Autosprint are separately reporting that the 2013-car Bahrain test, to be held between 17-19 December, will in fact be attended by three teams.

McLaren will not be among the select three: Red Bull, Mercedes and Ferrari. Those three teams finished the constructors' championship in first, second and third places.

La Gazzetta dello Sport said the collected tyre data will be made available to all of the other teams, who are permitted to send observers to Bahrain.

Autosprint correspondent Alberto Antonini, however, said the other teams are not happy to have been effectively locked out of the Bahrain test, handing an early advantage to the 2013 frontrunners.

Kovalainen vows to be 'more ready' for 2014 chance