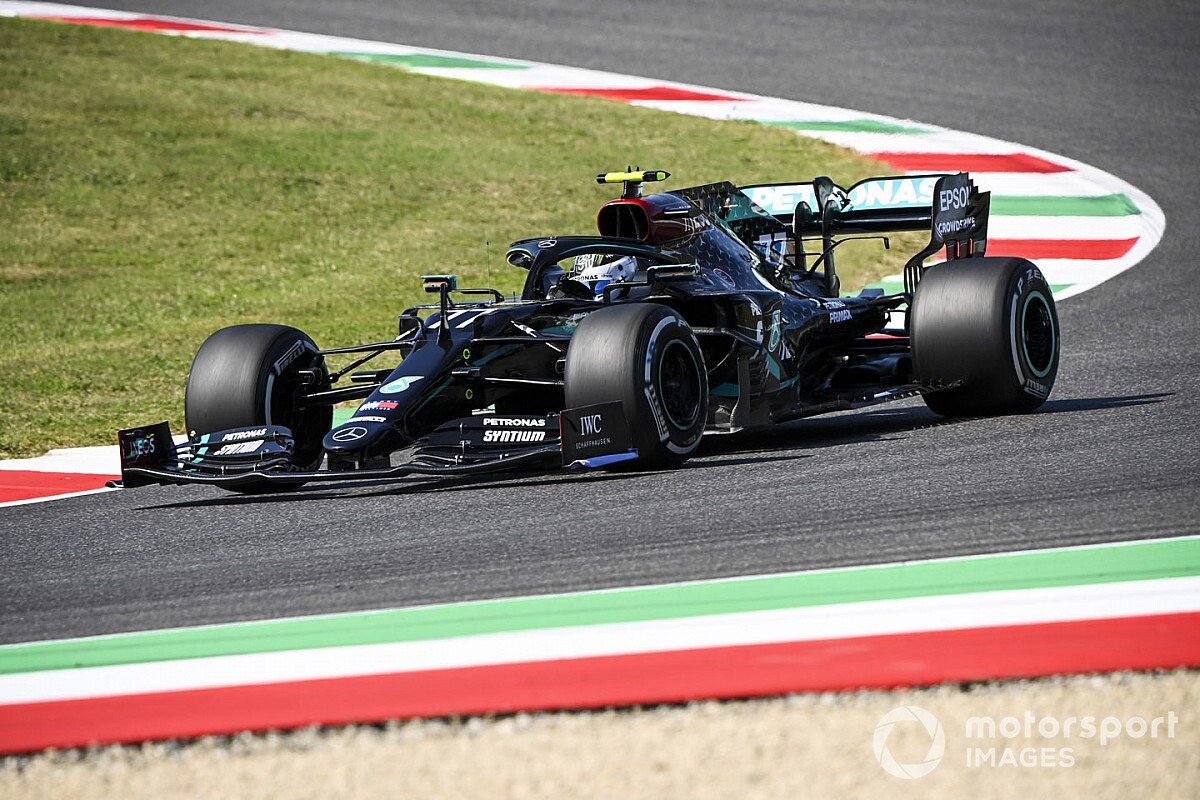 Valtteri Bottas set the pace for Mercedes in opening practice for the Tuscan Grand Prix as the Formula 1 drivers enjoyed their first official running at Mugello on Friday morning.

Mugello has only previously staged F1 test events, but the Italian circuit was a welcome addition for drivers to the 2020 calendar as part of the changes forced by the COVID-19 pandemic.

Friday offered the 2020 grid their initial chance to sample the circuit through first practice, with Bottas leading Mercedes to the head of the timesheets.

After sitting fourth following the opening runs on the medium-compound tyre in FP1, Bottas was able to go fastest of all after switching to the softs.

A best lap time of 1m17.879s marked a new F1 track record at Mugello, breaking the existing benchmark of 1m18.704s set by Rubens Barrichello at a test for Ferrari in 2004.

It was enough to give Bottas top spot by 0.048s from Verstappen, who had been the early pace-setter on hards for Red Bull.

Leclerc is using a new chassis this weekend following damage sustained to his Ferrari SF1000 in the crash at Monza last weekend, as well as running a classic livery as part of the team's celebrations at Mugello.

But teammate Sebastian Vettel continued to struggle for form, finishing a further one second off the pace in 13th place after reporting earlier in the session that he was "not happy" as his tyres were overheating.

Esteban Ocon finished sixth for Renault in FP1 at Mugello ahead of Kvyat and McLaren's Lando Norris, while Alexander Albon took ninth for Red Bull. Daniel Ricciardo rounded out the top 10 in the sister Renault.

Leclerc was the only Ferrari-powered driver to finish inside the top 10 as Kimi Raikkonen took 11th for Alfa Romeo ahead of Haas' Romain Grosjean, who was followed by Vettel and Antonio Giovinazzi.

Grosjean almost had a run-in with Sergio Perez at Turn 1 midway through the session, sparking an angry response over team radio from both drivers, although a collision was avoided.

Carlos Sainz finished 15th for McLaren ahead of Williams' George Russell and Kevin Magnussen in the second Haas car.

Racing Point had a quiet session as Lance Stroll and Perez finished 18th and 19th respectively. Stroll missed the opening portion of the session while the team completed fixes on his RP20 car, but got him out in time to complete 23 laps.

Nicholas Latifi propped up the timesheets for Williams in P20, lapping half a second slower than teammate Russell and suffering a late spin at Turn 3.