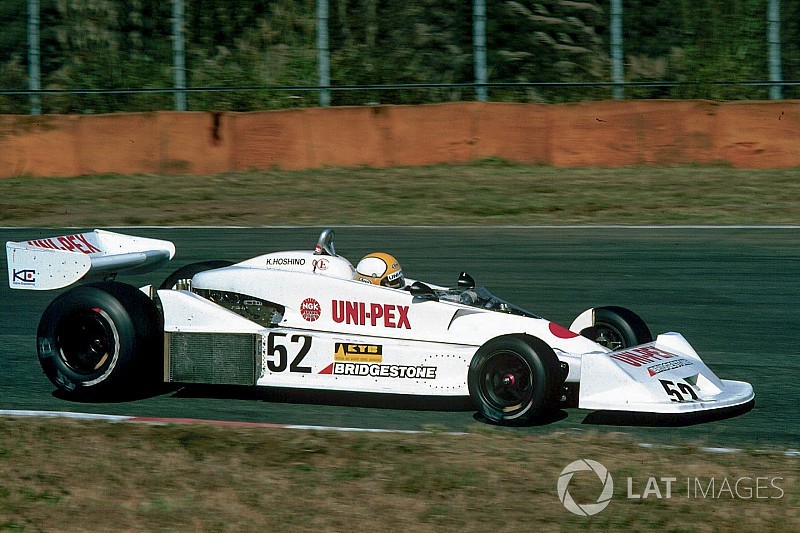 As the current Formula 1 machinery gets ready to tackle the daunting Suzuka circuit, the timing is right to recall two relatively unknown Japanese F1 teams of the ‘70s.

Honda was the first Japanese car manufacturer and team to enter Grand Prix racing back in the ‘60s. Other Japanese organisations, such as Toyota, have since failed to deliver, despite the millions of dollars that were invested in their efforts.

But two small Japanese teams tried to make it in F1 at a time when the championship was a lot less sophisticated and much more financially affordable.

At that time, most F1 cars on the grid were ‘kit cars’; an uncomplicated aluminium chassis mated to the highly-popular Ford Cosworth DFV V8 engine and an off-the shelf Hewland five-speed manual gearbox.

Kenji Mimura started the diminutive Maki Engineering F1 team in 1974, with Masao Ono and Mimura himself designing the squad's first F1 car. The Maki F101 was a simple ‘kit car’ with a DFV and a Hewland FGA 400 gearbox - nothing fancy.

However, experts observed that several components of the car were clearly oversized. In fact, rumour had it that the Maki was 150kg over the weight limit…

Its bodywork was… let’s say, innovative and unique. It had a tall airbox, long sidepods, a full-size deflector at the front and a strange yellow-tinted canopy to deflect the airflow around the cockpit.

The designers soon realised that the bulky bodywork caused the engine to overheat. After the first tests, some panels were modified to increase cooling.

A New Zealander, Howden Ganley, performed most of the tests and the Maki was entered for the first time at the 1974 British Grand Prix at Brands Hatch. He failed to qualify.

A few weeks later, Maki was at the Nurburgring. The undulations of the daunting German track caused the suspension of the Maki to break suddenly, sending the car straight into the barriers, and breaking Ganley’s ankles. The Maki did not reappear that year.

Maki returned to the sport in 1975 with a new car, the F101C, dressed in new bodywork. A relatively unknown Japanese driver, Hiroshi Fushida, drove the car with sponsorship from a new Japanese watch company called Citizen.

After a string of non-qualifications, the car was handed to Tony Trimmer, who also failed to qualify.

The Maki made a final appearance in F1 at the 1976 Japanese Grand Prix with Trimmer behind the wheel of the F102A. He again failed to qualify. After 12 non-qualifications, Maki was gone for good.

Around the same time, another small Japanese team tried to break into F1: Kojima, the idea of Matsuhisa Kojima, a former Suzuki motocross factory rider.

For years, Kojima Engineering ran cars in several national series before it decided to build its own F1 car in 1976.

Several former members of the Maki team, including Masao Ono, the chief designer, worked on the Kojima KE007, which was another ‘kit car’ on Dunlop tyres. The car was fitted with a floating front suspension (similar to the ones of the motocross bikes), linked to Kayaba Japanese dampers.

The water radiators were located inside the sidepods and the oil coolers were fitted underneath the rear wing. The bodywork was made of carbon fibre-reinforced fibreglass.

A hero in his home country, Masahiro Hasemi tested the car before it was entered in the 1976 Japanese Grand Prix at Fuji Speedway - the famous race that decided the World Championship between James Hunt in his McLaren and Niki Lauda in the Ferrari.

Hasemi amazingly set the fourth-fastest time in the first free practice session before he crashed the car in the second session.

The Kojima got rebuilt in time and Hasemi qualified 10th. The Dunlop rain tyres caused him some problems during the very wet race, but Hasemi eventually crossed the line in 11th position.

One year later, Kojima produced a new car, the KE009 still powered by a Cosworth engine, but this time shod with Bridgestone tires, which proved inferior to the Dunlops.

A new driver, Noritake Takahara, qualified the car in 19th place. But unfortunately for him, he tangled with Hans Binder’s Surtees on Lap 1 and had to retire.

A private team, Heros Racing, entered another KE009 in that race for Kazuyoshi Hoshino. He qualified 11th and finished at the same position, two laps down on the winner, Hunt. That was the final race for Kojima.

Alonso: Starting "from zero" each year key to Honda downfall