Valtteri Bottas claimed his fifth pole position of the 2019 Formula 1 season in qualifying for the United States Grand Prix at Austin. 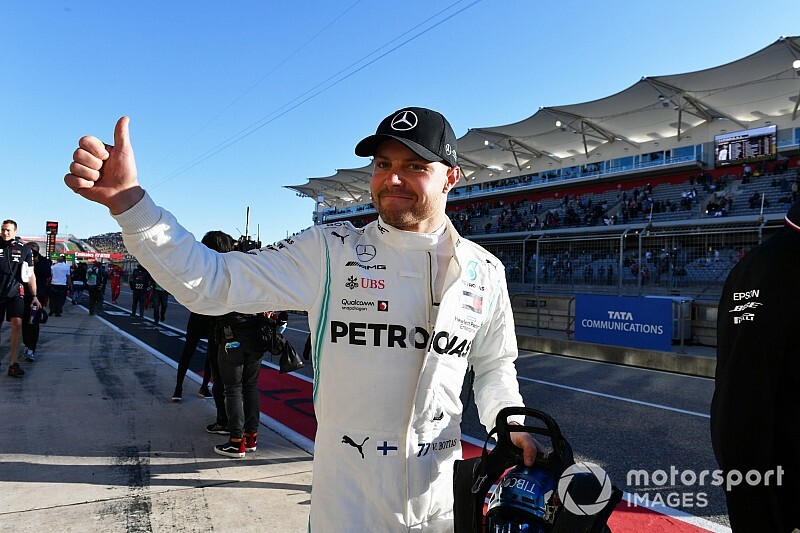 The Mercedes driver's first run in Q3, during which he posted a lap of 1m32.029s, was good enough to be sure of pole.

Neither he nor Sebastian Vettel, who was just 0.012 seconds slower, were able to improve on their second attempts but the Ferrari driver's first-run pace was also good enough for a place on the front row.

World championship leader Lewis Hamilton abandoned his second lap after losing time in the second sector, meaning he ended up fifth and 0.292s down. He only requires an eighth place in Sunday's race to wrap up the 2019 title.

Alex Albon was sixth in the second Red Bull, 0.519s off the pace.

Carlos Sainz benefited from having two sets of fresh softs in Q3 thanks to completing only one run in Q1 to secure midfield honours in seventh place with a lap just three tenths slower than Albon.

Renault driver Daniel Ricciardo, who completed his sole Q3 run on a clear track before the final flurry, was ninth fastest, 1.459s off the pace, and just over a tenth faster than Toro Rosso driver Pierre Gasly.

The Ferrari and Mercedes drivers will start on mediums having used that tyre compound for their Q2 time, along with Verstappen - with the rest of the top 10 using softs.

Renault driver Nico Hulkenberg was quickest of those knocked out in 11th place after lapping one tenth slower than Gasly.

He briefly climbed into the top 10 as he finished his final lap, only to be knocked down a place by teammate Ricciardo.

Kevin Magnussen was 12th for Haas having failed to improve on his second run, ending up 0.010s quicker than Toro Rosso's Daniil Kvyat - who had a time that originally put him 11th deleted for a track-limits violation.

Alfa Romeo duo Antonio Giovinazzi and Kimi Raikkonen were both eliminated in Q1 in 16th and 17th places respectively.

The pair were both in the drop zone after the first runs, with Raikkonen briefly climbing to 15th ahead of Gasly before Giovinazzi leaped ahead thanks to his stronger pace in the middle sector.

But Gasly then posted a time good enough to shuffle both back into the bottom five, where they ended the session well clear of the lead Williams of George Russell.

Racing Point driver Sergio Perez must start from the pits thanks to missing the weighbridge in practice two, so completed only one run and was 19th fastest.

That put him less than a tenth faster than the second Williams of Robert Kubica.