The Spaniard is in sixth place on the grid, starting alongside the Mercedes of Lewis Hamilton.

Austin, 16 November - Looking at Scuderia Ferrari’s race prospects for tomorrow, it would take a brave person to predict that Fernando Alonso could end the United States Grand Prix on the podium, but in terms of its battle to regain second place in the Constructors’ championship, the situation looks a little brighter, when looking at how Mercedes and Lotus fared today. 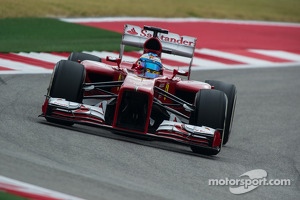 The Spaniard is in sixth place on the grid, starting alongside the Mercedes of Lewis Hamilton. Whether Felipe Massa can also bring home some valuable points will depend on how the race pans out and if he can stage one of his well known climbs up the order.

Today, he struggled in qualifying and was left stranded in Q2 with the fifteenth fastest time, although a penalty for Jenson Button, after the Englishman overtook under red flags on Friday, means the Brazilian actually starts from fourteenth. In fact, being on the dirty side of the track now might be more of a hindrance than a help. Felipe was mystified as to why he has been struggling so much here, but is still hopeful that he can have a good race.

For both Ferrari men, the key moments will be the split second when the red lights go out for the start: lightning reflexes and a well set-up clutch to launch the F138s off the line have often proved a valuable combination, setting up both men for a better afternoon than their grid positions might have led one to believe.

After that, it will be a case of chasing every glimmer of a gap in the hectic opening lap: that is always a gamble, but at this point of the season there is little to gain by being cautious.

Of course, the Red Bulls have locked out the front row again and also again, it’s Sebastian Vettel on pole ahead of Mark Webber. These two were in a class of their own, beating third placed Romain Grosjean by three quarters of a second. These three were so confident of their pace, they did not even use the softer compound Pirelli to get through the first part of this lunchtime’s qualifying.

Sharing the second row with the Lotus driver is Nico Hulkenberg for Sauber. The other drivers that the Scuderia will be watching closely in terms of its championship hopes are Heikki Kovalainen, eighth in the other Lotus and Nico Rosberg, who had a bad day in the second Mercedes and will start from thirteenth on the grid.

Tyres have again been a major topic this weekend, with suggestions that Pirelli’s decision to bring the Hard and Medium compounds, in other words, its hardest two compounds, is a very conservative choice, but that doesn’t mean we are in for a dull race tomorrow. In a situation where a one stop race looks like the most obvious strategy, one could expect the Lotus to challenge the Red Bulls, as the former are usually kinder on tyres if not as quick as the latter.

However, the Red Bulls seemed to be able to make the Mediums last quite well on Friday, which could see its two drivers take off and leave the rest behind. But if higher temperatures expected tomorrow influence tyre degradation, which so far has been minimal, it might spice things up a bit. The weather which has gone from icy mornings to hot and muggy afternoons, could again play a part tomorrow, along with the usual requirement for a well executed race strategy.

Fernando Alonso: “I feel reasonably satisfied with the result of today’s qualifying, because after the problems we have had almost all weekend long and even in Q1, we had little hope of getting through to the third part. It just goes to show how much things can change with around ten degrees higher track temperature: here we have suffered a lot in getting the tyres to work, especially in the morning sessions, when the temperatures were lower.

But looking at the pace we showed in the afternoon, I think that the sunshine predicted for tomorrow could help us to have a good race. It would be nice to make it to the podium, but my main aim is to help the team to take second place in the Constructors’ Championship. In order to do that, we need to beat the Mercedes, preferably right from the start, which will condition the way the race goes, even if it will not be easy, as the dirty side of the track here in Austin is one of the worst of the year”.

Felipe Massa: “That was a very difficult qualifying. From yesterday afternoon onwards, I haven’t been able to drive the car properly, something isn’t working and we haven’t managed to work out why. I don’t think I’ve got a specific problem, but there really is very little grip, both at the front and the rear and I wasn’t quick on either compound.

It is very strange, because Fernando managed to adapt better to the car-tyre package and I can’t understand why I can’t do the same, especially as I like this track a lot. I never expected to find myself struggling so much. Now we must find a solution for tomorrow, because even if it will be a difficult race, we have to do our utmost to move up the order and bring home points that will be valuable for the Constructors’ classification”.

Pat Fry: “Leaving aside the outcome of this qualifying, it’s hard to give a clear explanation of how the weekend has gone. The performances seen up to today have been affected by a series of variables and, if one leaves out the Red Bulls, I think that for the rest of the field, it’s been more demanding than usual to understand the behaviour of the cars. The changing weather and the varying levels of grip have added an extra challenge when it comes to establishing the set up and understanding the behaviour of the compounds chosen for this race.

I am sorry for Felipe who didn’t manage to get to Q3. Even though he gave it his all, he struggled a lot to find the right feeling, mainly because of the lack of grip. Fernando was better able to adapt and the result he got today during a very difficult weekend, is down to his great talent. Certainly our aims are higher than a sixth place, but the reduced gap to third place is a great boost for all the team to do their very best in this final part of the season”.

Pirelli: One pit stop expected at the Circuit of the Americas