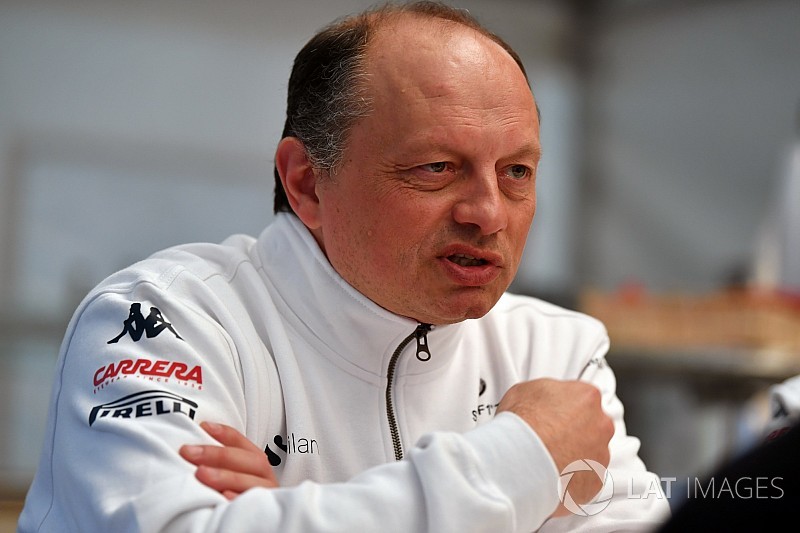 During the weekend of the Canadian Grand Prix, Motorsport.com talked with Frederic Vasseur about his life as team principal of the sole Swiss Formula 1 on the grid today, Sauber.

Vasseur openly talked about his decision to leave Renault, his choice to cancel the Honda deal, and the restructuration of the Sauber technical department.

Born in 1968, Frederic Vasseur studied aeronautics and engineering before starting his career in the junior formula series, creating his own team, ASM; a team that became ART Grand Prix in 2004 when he teamed up with Nicolas Todt, son of FIA President, Jean Todt.

Vasseur joined Renault Sport to as team principal of the Formula 1 in 2016 but left after just one year to accept the challenge of running the Sauber F1 team.

What’s the first thing he did when he arrived at Sauber in Hinwil, Switzerland?

“From the outside, a Formula 1 team is a very complex animal. And you really realise how complex it is once you’re part of it,” he told Motorsport.com. “The first races I attended with the team last year gave me the opportunity to meet the people, its organisation, and I took a bit of time to look and discover this team that - honestly - I didn’t really know beforehand. Gradually, and towards the end of last year, I started to have a better picture of the team.”

Do you have more freedom at Sauber than you had at Renault?

“Sauber is not owned by a car manufacturer, so there’s no inertia caused by a constructor that owns a team and is part of the decision making, and which is directly involved with the financial aspect of running the team,” he explained. “For those reasons, the situation is completely different. What I do here matches my profile and interests because I’ve always been an entrepreneur at heart, and the job I have here fits me quite well.”

Vasseur admitted that running a Formula 1 was an objective on his career.

“As a competitor, I wanted to competed against the best in the business,” he said. “But as an entrepreneur, it was a lot more complicated, because the step in between racing categories is sometimes pretty big.

“For a race team to jump from Formula Renault to Formula 3 to Formula 2 is, let’s say, quite manageable because the teams are about the same size and equally complex. However, the step between Formula 2 and Formula 1 is almost impossible to take.

“When the FIA wanted to open things a bit back in 2010, we considered going F1 racing but we quickly realised it was extremely complex, financially and especially in terms of a structure as we needed to jump from 60 people in September to 200 in January.

“We had started working on the project, but when I see what happened to the people who tried to make the jump, I really think we made the right call at the time!”

After having spent time looking at the structure of the team, Vasseur was forced to make some difficult decisions in terms of personnel.

“The main problem with Sauber is that the team had suffered for a long time from financial difficulties and had lost quite a bit of people,” he explained.

“Rebuilding an F1 team is very difficult and time consuming. You have to hire new people, and most of the time, they work for other teams, they have to respect periods of gardening leave, so it takes sometimes months to have these new people in place. Even though we’ll only see the results in a year or so, we have to be patient because that’s how F1 works.”

Vasseur also cancelled the deal the Swiss team had with Honda.

“Sauber had a pre-contract with Honda at the time. But for various reasons, it was very complicated to get this to work because we didn’t have the capacity to make our own gearbox so we would have had to rely on McLaren for that but since the team was leaving Honda, it wasn’t easy at all.

“It was far from being smooth sailing. I quickly put a stop on that and we went back to Ferrari with whom we enjoy a good, solid and historical relationship. At roughly the same time, Mr. Marchionne wanted Alfa Romeo to make a return in F1, so we found an agreement to make it happen,” the Frenchman said.

Vasseur also said good things about his former junior formula driver Charles Leclerc, now driving for Sauber with reasonable and who claimed a sixth place finish in Azerbaijan back in April.

“Charles is making progress and he’s matching the growth of the team,” Vasseur confessed. “He has made a step forward since his first races when he needed some direction. He has improved, and he did pretty well in the last four or five races. The road is still long for him [smile], but things will continue to improve as we’ll have new parts for the car at the next race and we already put a lot of effort on the 2019 car because the new technical regulations offer us a nice opportunity to do well.”