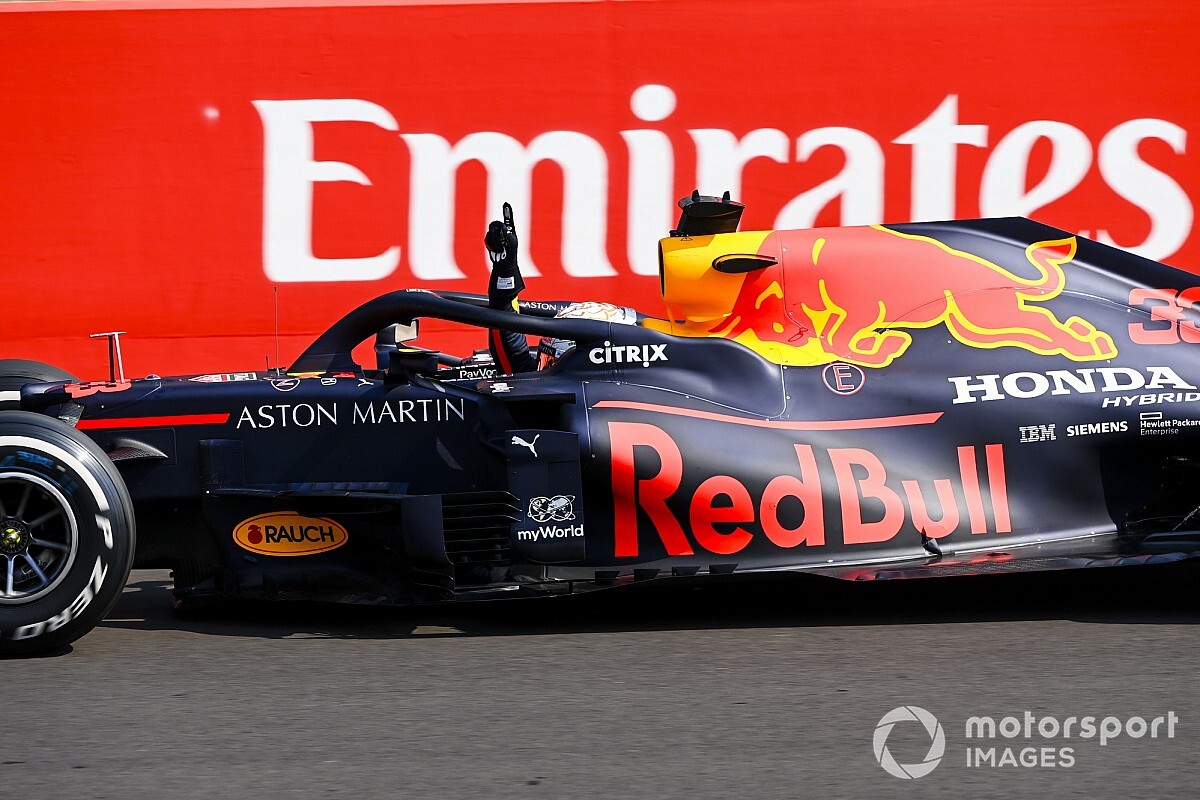 Verstappen was able to give his rivals a lesson in tyre management by stretching out his first stint on the hard compound Pirellis, pulling out a gap on Valtteri Bottas and Lewis Hamilton after their early stops.

Verstappen emerged from the pits after his first stop just behind Bottas, but quickly passed the Mercedes driver before moving off the medium tyre just six laps later, moving back to hards.

A final push to cover off a possible one-stop strategy for Hamilton was ultimately not required as Mercedes called the world champion in for a second time, returning the lead to Verstappen.

Having downplayed Red Bull's chances throughout the weekend, Verstappen conceded after the race that he did not expect to beat the Mercedes drivers to victory.

"I didn't see it coming," Verstappen said. "But after the first stint, it seemed like we were really good on tyres. Of course that is a question mark, how Mercedes is going to go on the hard tyre.

"We had a lot of pace in the car, I didn't really have a lot of tyre issues at all. We just kept pushing, and [it's] an incredible result of course to win here.

"We had a great day. I think everything worked out well we had the right strategy. Everything was running smoothly. I was incredibly happy to win."

Verstappen was able to make a good start from fourth place on the grid before putting pressure on both Mercedes drivers in the early stages of the race.

Red Bull warned Verstappen that he needed to look after his tyres and to drop box, only for the Dutchman to quip back: "This the only chance of being close to the Mercedes, I'm not just sitting behind like a grandma!"

Verstappen explained after the race that he sensed an early opportunity to catch the Mercedes, and didn't want to let it slip through his fingers.

"We so far [this season] didn't really have an opportunity in all the races to push them, and I could see we were pushing them," Verstappen said.

"So I tried to put the pressure on. They had to pit, and from then onwards, I could do my own pace, and basically built that that advantage to the end."

The result lifts Verstappen to second place in the drivers' championship ahead of Bottas, who finished the race in third, and leaves him just 30 points behind leader Hamilton.

Asked if he had a Mercedes-beating car for the Spanish Grand Prix in Barcelona next weekend, Verstappen replied: "I don't know, I think we do need to use soft tyres, that seems to suit our car.

"But we'll see again in Barcelona. I think at the moment, we are just very happy that we just won."