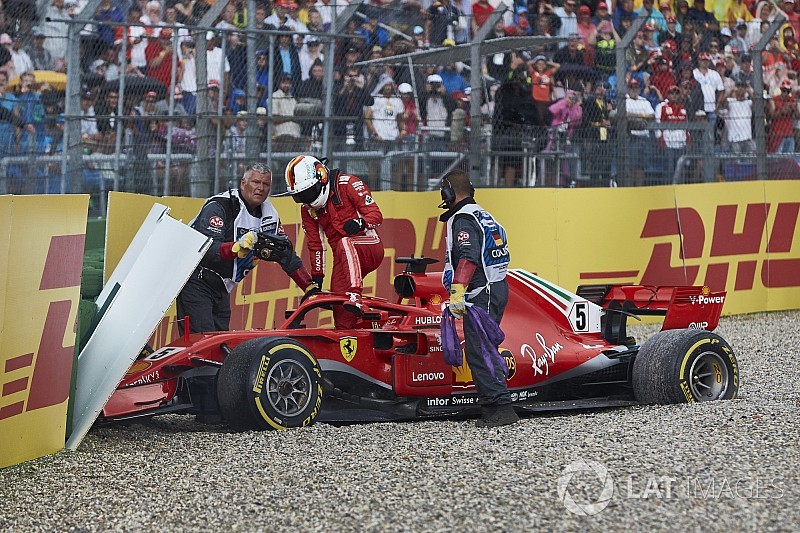 Vettel was nine seconds clear at Hockenheim with 15 laps to go when he was caught out by the late-race rain and went off at the Sachskurve in the stadium section.

That incident opened the door for Vettel's title rival Lewis Hamilton to take victory from 14th on the grid and move back into the world championship lead by 17 points.

Verstappen insisted that in the conditions Vettel going off "all of a sudden" was absolutely understandable and could have happened to anyone.

"It was super tricky out there. Especially in that corner," said Verstappen, who finished fourth.

"Even if you experience the slightest lock up there, you immediately go off. These were very difficult circumstances. So things like this can happen."

Asked to comment on the fact that it was not Vettel's first error of the 2018 F1 season, Verstappen replied: "Well, mistake... these were difficult circumstances.

"It could have happened to someone else just as easily."

Rain had been predicted throughout the race, and when it did arrive late on it never became hard enough for intermediates or wets to be the best tyre but was still extremely tough for those on slicks.

"You just try to find good grip everywhere, but you don't want to take too many risks because you already have some good points in the bag," said Verstappen.

"You don't want to risk losing those by going off.

"Dealing with that risk is very difficult. If you lock up for just a moment, you fly off the track."

Verstappen was among those to pit for intermediates and then had to change back to slicks just two laps later, but his margin over those behind him was such that the two extra stops did not cost him fourth.

"It just didn't go our way," he said. "Normally I pray for rain, but this time it didn't help me. Fourth was the best possible.

"It really started to rain heavily. The rain spread towards Turns 8 and 10, so I thought: if it continues like this, then it's also going to come to the third sector.

"Unfortunately that wasn't the case. So then I had to pit again. I took a gamble and it didn't work out."

Penske hints at US chance for McLaughlin