Verstappen's early laps in Russia "like a wet race" - Horner 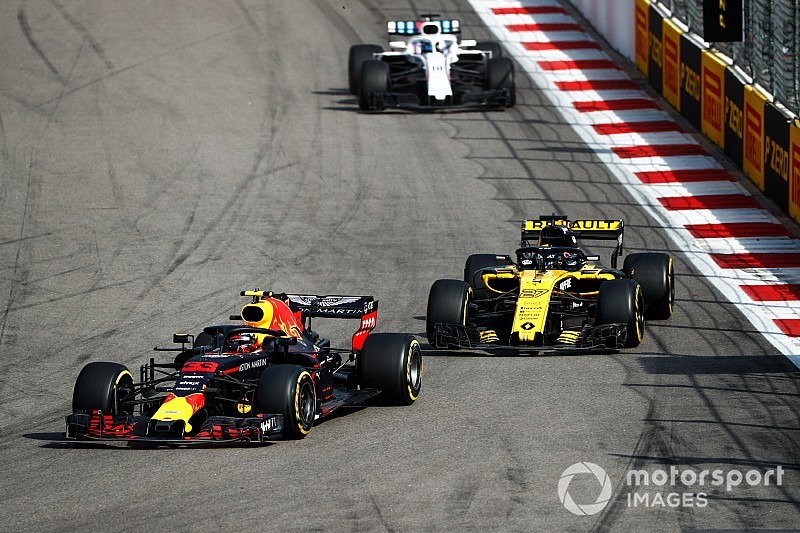 Red Bull Racing boss Christian Horner says that Max Verstappen's charge through the field in the early laps of the Russian Grand Prix was akin to a wet race.

From the back of the grid, the Dutchman was up to 13th place by the end of the first lap, and he continued to make progress from there.

After the frontrunners stopped for new tyres, he subsequently led for many laps before his own late stop dropped him back to fifth.

"They were mega," Horner said of Verstappen's early laps. "His 21st birthday today and he drove like a veteran.

"By the time he got to lap seven he's in P5. That was one of the most outstanding first few laps we've seen for a long time.

"There's always risks, but he was very assertive, and it looked like the start of a wet race at the start of the grand prix, the way he was able to pass cars inside, outside, and very, very quickly and efficiently.

"He's driven some great races, but this was an attacking race. He then led from lap 14 all the way to lap 42. And he was able to manage the tyres extremely well. It was just a shame we had to stop."

Asked if Verstappen could have stayed out longer, Horner said: "We toyed with the idea but he was at the limit of wear, he was reporting that the tyres were starting to go away.

"With that compound they can drop very suddenly. We felt we'll take the stop now, if there's a safety car in the last 10 laps, we're in a really strong position.

"That would have been the only realistic chance. If it had grouped the field up in the last 15% of the race then there might have been a chance on the grippier tyre. Unfortunately that wasn't to be.

Horner believes that had the Red Bulls not started from the back, they might have given the Ferraris a hard time, although he conceded that Mercedes was probably out of reach.

"To win the race would have been very tough. We could have challenged Ferrari harder.

"We might have been able to have a go at them in qualifying and we had a fast race car today. I think we'd have been putting a lot more pressure on them."

Horner says that Verstappen has been on top form since his frustrating Monaco GP weekend.

"Following Monaco, that hurt him quite badly because he was obviously extremely quick in Monaco right up to the point he crashed. That was a tough outcome for him. From that point he's driven incredibly well.

"You look at his season, it's been very, very strong. He's driven some great races. So I think he's maturing, he's obviously got quite a reasonable amount of experience now.

"He's performing at an incredibly high level, you can see that with the barometer of his team-mate. They are two very competitive guys, and he's driving extremely well."

Honda checking if engine upgrade can run in Japan