Max Verstappen has been fined for breaching parc ferme rules after Formula 1 qualifying in Brazil on Friday by touching the rear wing on Lewis Hamilton's car.

Verstappen was called to see the stewards on Saturday morning in Brazil after a fan video emerged showing him inspect and touch the rear wing on title rival Hamilton's car after qualifying.

The hearing took place at 9:30am at Interlagos. Verstappen was joined by Red Bull sporting director Jonathan Wheatley for the meeting with the stewards, which lasted less than half an hour.

In a subsequent bulletin issued by the FIA, it was confirmed that Verstappen had received a €50,000 fine for breaching Article 2.5.1 of the International Sporting Code.

Article 2.5.1 of the ISC reads: "Inside the Parc Ferme, only the officials assigned may enter. No operation, checking, tuning or repair is allowed unless authorised by the same officials or by the applicable regulations."

The stewards spoke with Verstappen and analysed the fan video footage, as well as onboard camera footage from the cars of Verstappen, Hamilton, Valtteri Bottas and Fernando Alonso.

Importantly, the stewards note that there was "insignificant force when Verstappen touched the wing" of Hamilton's car, linking to the ongoing investigation into the Mercedes' DRS failing the post-session checks.

The stewards acknowledged that inspecting and touching other cars has become "a habit for drivers" that was "mostly harmless", but nevertheless noted it was a breach of the parc ferme regulation and "has significant potential to cause harm". 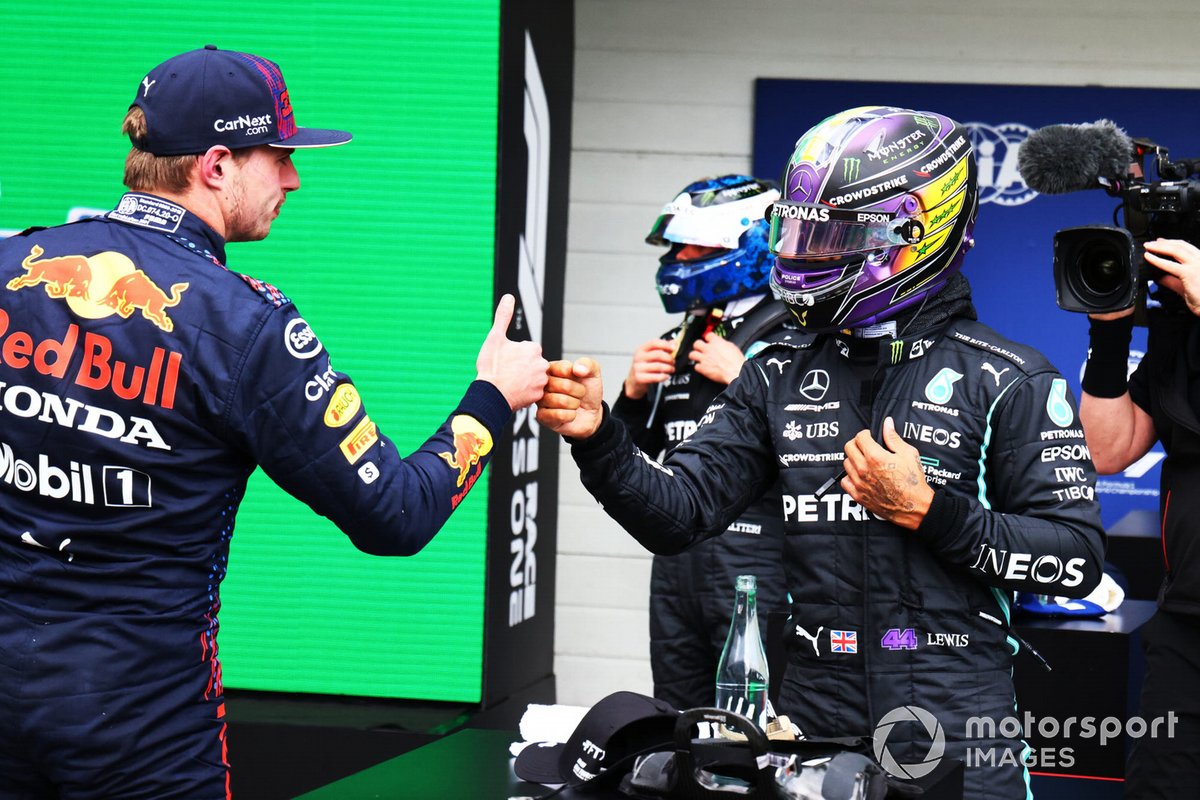 As a result, the stewards felt it was important to take action and fine Verstappen €50,000, as well as adding it "is intended that all teams and drivers take notice that future breaches may incur different penalties from the Stewards of those events."

It means that Verstappen will keep second place on the grid for the sprint race, and would be in line to inherit pole position should Hamilton be excluded from the qualifying results.

Verstappen qualified second behind Mercedes driver Hamilton at Interlagos, finishing four tenths of a second behind as the title contenders locked out the front row for the sprint race on Saturday.

But Hamilton's sprint race pole was thrown into doubt after the FIA found the DRS on his Mercedes was not in conformity with the technical regulations.

The hearing was adjourned until Saturday morning, and took place at 10:30am local time in Brazil, with no decision yet being announced.

Verstappen will head into Saturday's 24-lap sprint at Interlagos with a 19-point lead over Hamilton in the drivers' championship, with three points on offer to the winner of the Saturday race.

The result of the sprint race will then set the grid for Sunday, but Hamilton will take a five-place grid drop regardless of the stewards' ruling on his wing due to an engine penalty.

"The Stewards heard from the driver of car 33 (Max Verstappen) and team representative.

"The stewards also examined a fan video taken from across the track, CCTV video footage taken from pit lane and in car footage from car 14, car 33, car 44 and car 77. In all, these videos gave a clear picture of what occurred in parc ferme following the qualifying session.

"Verstappen exits the car, then moves to the rear of his car. He then takes his gloves off and puts his right hand at the slot-gap of the rear wing of his car. He then moves to car 44 and repeats the exercise, touching the rear wing in two places, once on either side of the DRS actuation device, but on the bottom rear side of the wing, in the area of the slot gap and never near the actuator or the end fixation points.

"It is clear to the Stewards that it has become a habit of the drivers to touch cars after qualifying and the races. This was also the explanation of Verstappen, that it was simply habit to touch this area of the car which has been a point of speculation in recent races between both teams. This general tendency has been seen as mostly harmless and so has not been uniformly policed. Nevertheless, it is a breach of the parc ferme regulation and has significant potential to cause harm.

"Considering the fact that no direct harm was caused in this case, in the opinion of the Stewards, and that no earlier precedent of penalties for this exists – on the one hand; but that it is a breach of the regulation and has potential for serious consequences on the other, the Stewards determine to take action in this case and order a fine of €50,000. The Stewards further note that it is intended that all teams and drivers take notice that future breaches may incur different penalties from the Stewards of those events.

"Competitors are reminded that they have the right to appeal certain decisions of the Stewards, in accordance with Article 15 of the FIA International Sporting Code and Chapter 4 of the FIA Judicial and Disciplinary Rules, within the applicable time limits."

Horner would be "amazed" if Verstappen got an F1 penalty