Verstappen expects to fight Mercedes, but not Ferrari, at Spa 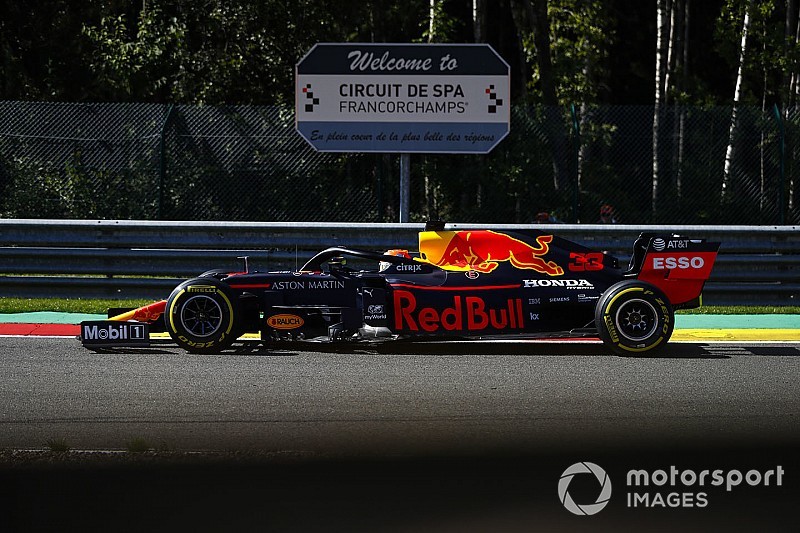 Max Verstappen expects to challenge Mercedes in the Belgian Grand Prix, but believes Ferrari may be out of reach on evidence of Friday practice running.

Ferrari locked out the top two in both of Friday’s sessions, with pace-setter Charles Leclerc more than eight tenths clear of both Mercedes cars over one lap.

Red Bull driver Verstappen ended the day 1.271s off the pace, slower than all of his usual rivals as well as Racing Point’s Sergio Perez – and though the top cars were much more evenly matched on long runs, the Dutchman is doubtful that Ferrari can be toppled this weekend.

“I think this track definitely suits them a bit better than us, they are very strong, they gain a lot of time on the straight here but that is not a surprise,” said Verstappen of Ferrari.

“We try to do the best we can from our side. Today was not amazing as we had to run with lower power all day compared to the normal mode we use on a Friday, but in general I am quite happy with the car balance.

“I don’t expect to beat Ferrari but hopefully we can be closer to Mercedes, as it seems like they are a bit down to Ferrari.”

Asked whether Red Bull could still find a better balance between low drag for the straights and downforce for the corners in the twisty middle sector, Verstappen said: "I don’t think there is much you can do now.

"Everyone is running really low downforce, so I think the next step we can do is take the wing off – but I don’t think that is really smart."

While new teammate Alexander Albon debuted the upgraded ‘Spec 4’ Honda in the RB15 on Friday – and is thus set to start from the back of the grid – Verstappen is continuing with an older power unit.

The Dutchman repeatedly reported a loss of power throughout FP2, but has indicated this was due to the mileage previously accrued by his Friday unit.

“My engine was a bit older and around here it’s quite hard on the engine, so you need to be safe with them,” he explained.

“We still have another engine – that engine we'll use tomorrow, and then we’ll see. Ferrari will be very strong, [but] from our side we can go a lot faster as well. Today we didn’t have our normal performance.

“It’s not a concern. We knew it was coming up. Of course you have few engines you can use [over a season], and of course some of them are getting a bit older.”

Albon had to "rewire brain" to drive Red Bull car