Verstappen: Red Bull "not too far away" on the straights 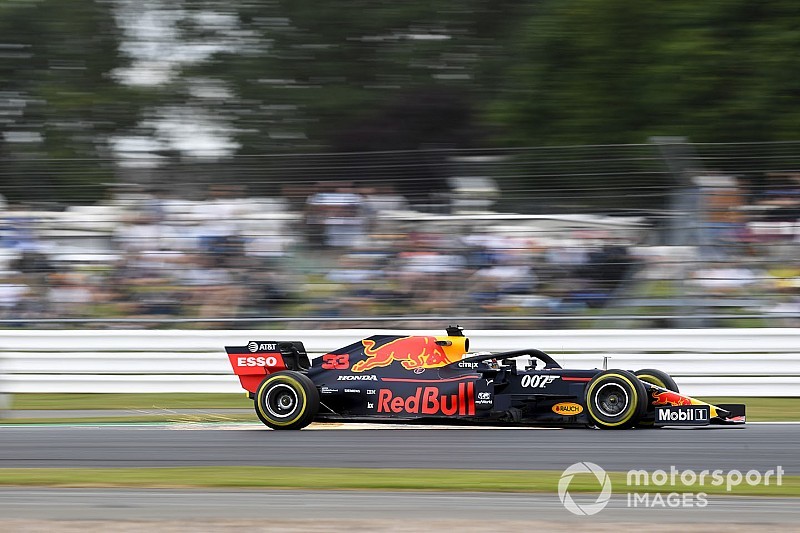 Max Verstappen says his Honda-powered Red Bull is “not too far away on the straights” at the British Grand Prix, as he eyes a second straight Formula 1 victory.

Verstappen qualified 0.183s off the pace in fourth at Silverstone, where he thought he might have claimed his first pole position in F1 without a problem he reported as “turbo lag”.

Red Bull was 0.7s off the pace in British GP qualifying last season with Renault, but Verstappen feels its straightline speed deficit is lower now as Honda continues to make progress and the team refines its car set-up.

“This weekend we found a good compromise between, let’s say, cornering and straightline speed,” said Verstappen. “If you look at our wing we are running a bit less this year.

“So we are not too far away on the straights here and somehow our car is still working really well through the high-speed corners.

“Last year, even when we trimmed the wing it was not giving us that extra straightline performance.”

Red Bull’s performance at Silverstone is so strong that Verstappen said he is comfortably flat through Abbey and does not brake through the Maggotts and Becketts complex either.

The team is usually stronger in race trim than qualifying as Honda concedes its performance deficit is at its greatest when all manufacturers turn their engines up to the maximum.

Verstappen will line up behind an all-Mercedes front row and next to the Ferrari of Charles Leclerc, with the other Ferrari of Sebastian Vettel in sixth.

However, Verstappen does not believe Mercedes is “disappearing into the distance” and thinks the top three teams are “all very close”.

The Dutchman had been disappointed with his Friday practice performance after struggling with his car’s handling, which led to teammate Pierre Gasly outpacing him.

“I don’t know what went wrong but we lost a lot of rear grip all the time,” he said. “I tried all different kind of things, different rear wings, and it never seemed to stabilise.

“Now [for qualifying] we managed to do some changes to the car and it seemed to work.”

The British GP as it happened