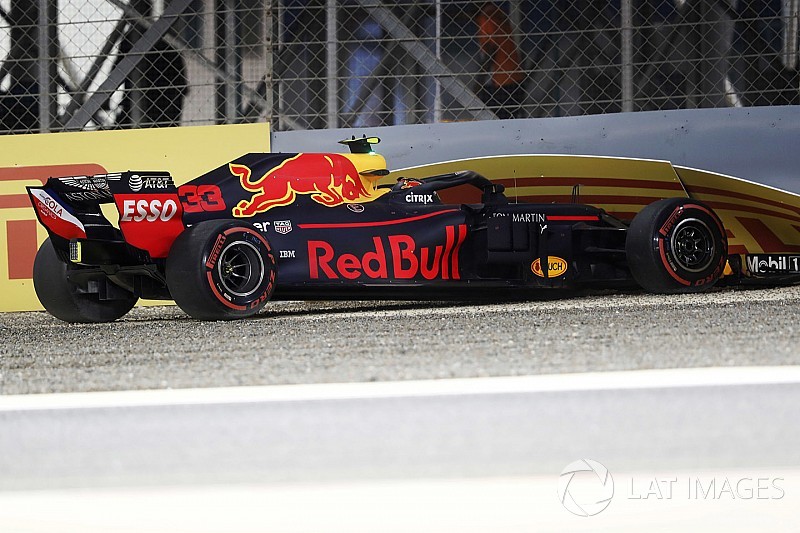 Max Verstappen has blamed a 150hp power surge from his Renault engine for triggering the Q1 crash that put him out of qualifying at the Bahrain Grand Prix.

The Red Bull driver had put in a time good enough to get him through to Q2, and was completing a second high-speed lap to help sort out some engine settings.

But as he ran across the kerbs at Turn 2, the back end of his RB14 stepped out and he spun across the track, hitting the barriers on the outside of the circuit.

Having studied the telemetry data on his return to the garage, Verstappen uncovered a bizarre unexpected boost of power caused him to lose control.

"It was unfortunate," said Verstappen, who will start 15th. "I studied the data a bit and saw we had a 150hp increase, which is a bit odd.

"The corner isn't flat out, but it was like an on and off switch. It spun up the rear tyres quite aggressively and then I spun.

"I didn't anticipate it at all. With 150hp extra, suddenly it went and when you are already on the limit it is quite a lot."

How they line up for the Bahrain GP...

Verstappen's crash in qualifying in Bahrain has come just two weeks after the Dutchman also spun in the Australian Grand Prix, but team boss Christian Horner has denied suggestions that the youngster is pushing too hard.

"I think it is just racing," Horner told Sky. "That lap was never going to be a quicker lap, it was purely about giving the engine the opportunity to learn the optimum settings.

"It was a mistake but he will have the chance to bounce back from it."

McLaren "astonished" by lack of pace in Bahrain qualifying