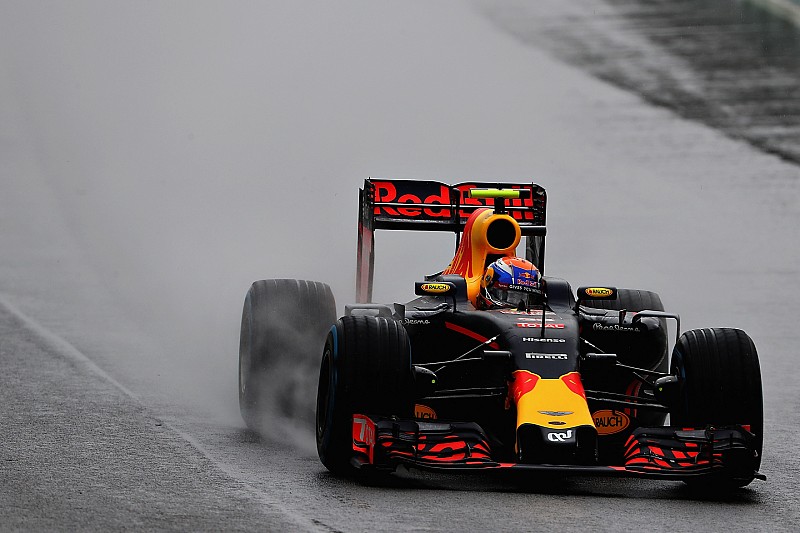 Max Verstappen says lessons he picked up from quad biking in the snow helped him avoid a smash with the barriers during his infamous Brazilian Grand Prix spin.

Prior to his brilliant charge through the field at Interlagos, Verstappen came close to ending his race early after losing control on standing water on the top of the hill.

His car instantly flicked sideways but, just as he appeared to be heading towards the barriers, Verstappen managed to regain control and get going again – even keeping hold of his second place.

Speaking at a Red Bull media event in Abu Dhabi on Wednesday, Verstappen talked about exactly how he managed to recover – and did not panic to avoid a full spin that would have put him out.

"When I spun I pressed the brakes and that locked all four wheels," he explained. "Then, I pulled the steering wheel straight because if you turn into it, you start spinning. So you have a four-wheel drift.

"Then, when I saw the front was sliding in the right direction, it was the perfect way, plus I was arriving to the barrier, I released the brakes and the wheels started turning again and it gripped up. I was in control with that last bit.

"You need the luck that the car starts to move in the right direction, because if it started spinning around then you have an issue. But that was my luck that it started to go to the right, and then it is up to your control to keep it out of the barrier."

Verstappen said the time spent as a youngster quad-biking in the snow, or karting in the wet, had taught him all about getting out of such situations.

"It is something you learn from driving a quad in the snow or go-karting," he explained. "You have a moment and you try to always correct it for sure. It is something I have been doing since I was very young."

Verstappen's brilliant recovery through the field at Interlagos was likened to previous genius wet weather performances by Ayrton Senna and Michael Schumacher.

But while welcoming the praise, the Dutchman insisted he would not get carried away with it.

"It is nice for sure but I think it is also important to stay very neutral about it," he said. "It was a great race but it is finished now. I am focusing ahead.

When asked if he was surprised that other drivers were not adopting his tactic of hunting out the best grip in the wet during the safety car, Verstappen said "I was pretty happy that they didn't do it.

"It is something my dad taught me all the time – even when you are behind the safety car or something and you cannot push fully, you always try to find the grip especially in the wet.

"So for me it has always been very natural. From a very young age I have been doing that – even in F3 it was the same."

Ecclestone: “Nothing has changed” since Liberty deal