Verstappen: "Second was safe but we had to gamble" 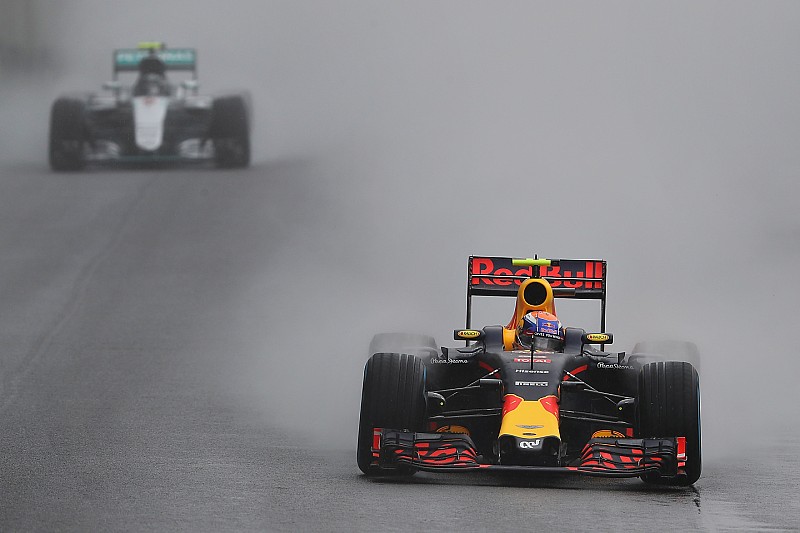 Max Verstappen reckons he would've taken a comfortable second place in the Brazilian GP if not for a mid-race switch to intermediates , but says Red Bull was right to gamble.

Verstappen was running second after passing Nico Rosberg round the outside of Turn 3 as the race approached halfway point, but the Dutchman soon followed teammate Daniel Ricciardo's example in pitting for inters.

The decision did not work out, as the rain worsened, and Verstappen had to switch back to the full wet compound, dropping to 16th - although he would eventually recover to third by slicing through the field on fresher rubber.

Asked if he could win without the wrong tyre decision, Verstappen said: "Win maybe not, but second was definitely possible.

"I think we were in quite a safe position in second but sometimes you have to gamble a little bit - that is what we tried today. We got some great overtakes so I am very happy, of course."

Looking back at his eventful race, which was packed with overtaking manoeuvres, the Dutchman recounted: "So, in the first one [overtake on Kimi Raikkonen], I was trying some different lines, I found a good one and I knew if Kimi didn't take that line, I had a good chance to overtake.

"I pulled out at the straight and went straight to the inside and passed him – and from then on I was relieved.

"Then with the red flag, when we restarted again, the track was worse than before, I had good pace and a good fight with Nico in Turn 3, tried to follow Lewis [Hamilton] a bit and had a massive moment, lucky to not crash the car.

"I got call to box, we did a pitstop, then it started to rain, and last sector was undriveable on inters. We had to pit again and I was 16th, started to pass people again, couldn't see where I was on the straight, but passed a lot of them - and to get back on the podium was a great result here."