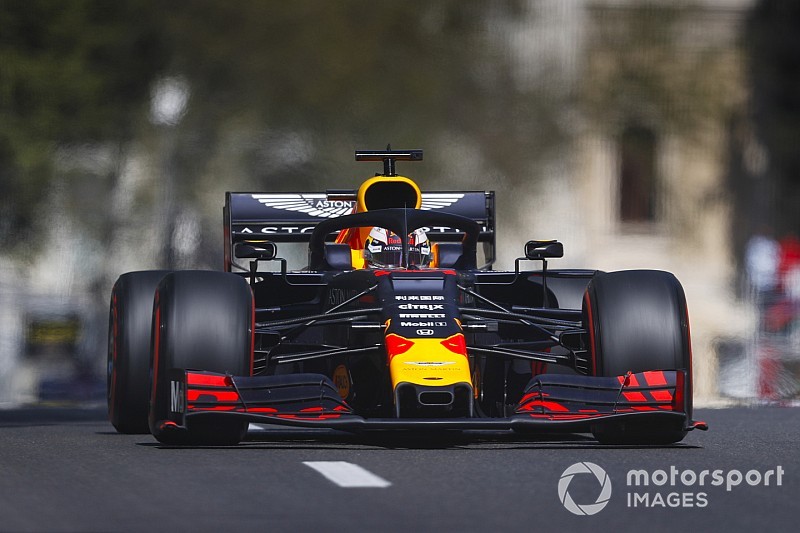 The Dutchman had topped the Q2 session in Azerbaijan and had provisionally been on the front row towards the end of Q3, before he slipped down to fourth in the end.

But he reckons the key element that decided the final order was who got the better tow rather than who delivered the best lap – something he thinks does not reward the best drivers.

"I never really thought I was going to fight for pole position, but around this track it's so dependent on slipstreams as well, that you can be first or fourth," said the Red Bull driver.

"It's a bit of a shame really that round here you can't just do a lap on your own and smash it, because there'll be one guy who might be a little bit slower but catches a tow and that's easily four or five tenths here.

"Out of turn two you gain a tenth. Then up to the castle uphill you gain a tenth, and then another three at least on the main straight if you are just following behind. The cars are so draggy this year that that's actually really critical at the moment."

One way for Verstappen to have guaranteed himself a tow would have been to get teammate Pierre Gasly to give him a tow, with the Frenchman having to start from the pitlane because of his missed weighbridge sanction.

But Gasly said that in the end it was decided not to adopt such a tactic because it would have forced him to start on used tyres.

Gasly told Motorsport.com: "That was not really in the discussion, because of course if I would have been in Q3 I would have had to start with a used set, and we start already from the pitlane, which is painful enough.

"We had a discussion for Q2 but Max was already fast enough so we didn't have really any point to go out."

Having failed to get a tow on his final effort in Q3, Verstappen thinks the fact he ended up only 0.574 seconds adrift of pole man Valtteri Bottas is hugely encouraging in terms of what it means about the pace of his car.

"I was on my own, so compared to my own lap time already I lost three and a half tenths, just purely because you are not in that tunnelling effect of all the cars," he said. "We have a good car to race with.

"The cars ahead basically they did the lap time just on the tow, so on pure pace, we are good. I think we're close to Ferrari and Mercedes and it will just depend on tyre warm-up and tyre life during the race as well. I think that at the end of the day will make the difference."