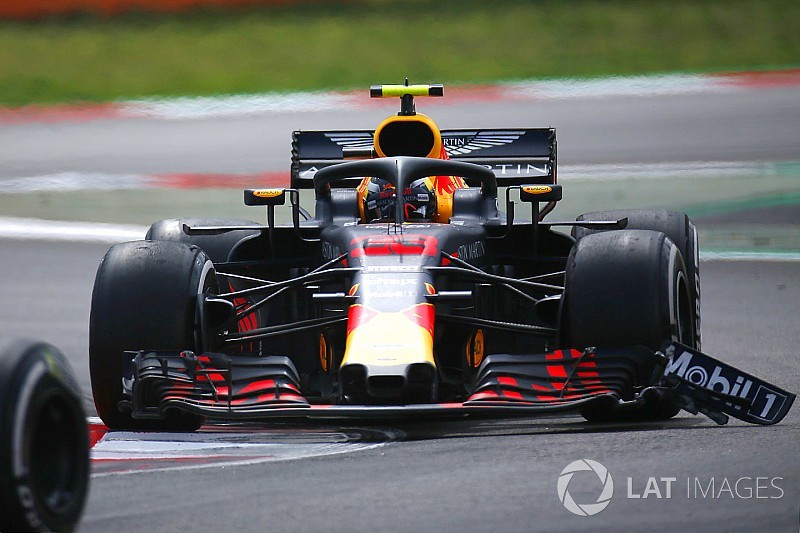 Max Verstappen was surprised how little the front wing damage from his clash with Lance Stroll hampered his Red Bull Formula 1 car in the Spanish Grand Prix.

Verstappen clipped Stroll's lapped Williams as they prepared for the restart from a virtual safety car period in the final part of the Barcelona F1 race.

That left Verstappen missing a section of his car's front wing for the remainder of the race, but he was able to stay ahead of Sebastian Vettel's Ferrari and secure his first podium of the 2018 season in third.

"I was trying to be as close as I could to be just on the positive side [of the VSC delta] and I was quite close behind Stroll," Verstappen explained.

"I felt that he braked a bit and I was really close, so I just clipped him.

"Luckily it was only the outside bit of the wing so I could continue, I just had a bit more understeer in the high-speed corners. I managed to solve that with some tools and it was OK."

Asked by Motorsport.com if he had expected the damage to cause him more problems, Verstappen replied: "Initially I thought so. I kept going and felt a bit more understeer in Turns 3 and 9 and was maybe braking a bit deeper into hairpins but it was not too bad to be honest.

"I opened some tools and it was all good. It was of course a little bit slower, but I don't think it affected me too much."

Verstappen's teammate Daniel Ricciardo finished fifth, having lost ground when he spun at the VSC restart.

"[I was] struggling to keep these tyres warm," Ricciardo told Sky Sports F1. "Fortunately there were no walls like [Romain] Grosjean found in Baku, but it put me in no man's land."

Ricciardo felt his car had been difficult throughout the race.

"It was just a bit tricky to drive," he said. "It was fast when you were able to put it all together but it was easy to make mistakes. We'd describe it as on a knife edge.

"If you got lucky you could put in a blistering lap, but probably one out of five laps you could make it happen and the other four I was sliding and struggling to stay on."

Vettel says he had no option but to stop twice