Vettel: I had speed to win in Austin

Sebastian Vettel reckons he had the speed to win the United States Grand Prix, had he not lost ground on the opening lap after a collision with Daniel Ricciardo.

The Ferrari driver had gone in to the Austin race on the backfoot, after a three-place penalty for failure to slow enough for a red flag in Friday’s opening practice session left him fifth on the grid.

Hopes of a good result evaporated early on when he tangled with Ricciardo, dropping him to 15th, but the nature of his recovery drive to fourth – and the fact teammate Kimi Raikkonen went on to win – showed him what had been possible.

Asked if he felt the win was lost in the Ricciardo clash, Vettel said: “I didn’t try to lose the race in that corner.

"I think if we had stayed fourth or fifth after the first lap, then we would have been a lot closer. And then I don’t know if everybody is doing the same things, but surely we had the speed to win.”

Vettel's thoughts about having a car that could have come out on top were backed by Mercedes boss Toto Wolff, who was convinced that his team was simply not good enough in Austin.

“Imagine Sebastian not spinning out in lap one I think he would have probably won the race easy,” he explained.

“It’s stressful. With the drivers’ championship, we are in a strong position but I always said we mustn’t drop the ball. We’ve seen that in the past with other teams, and with the constructors’ championship that is very important for the team.

“Nothing is done yet. There are 129 points to be scored with the 66 points we have, of course that is also a good buffer. But there is no reason to giggle away and think you have the trophy in your hand because we can see that we haven’t got it in the hands.”

Vettel said that he felt the Ricciardo clash was a simple racing accident, and neither man was to blame for what had happened.

“Obviously he tried to come back and we both just about managed to get the corner,” he said. “I think initially he had a bad exit out of 12 but I came back.

“I had the inside but then I think he didn’t see me, so we went side-by-side and I think then it was quite clear.

"He obviously tried to go around the outside and we touched pretty much wheels on. So after the touch I lost the car and spun.” 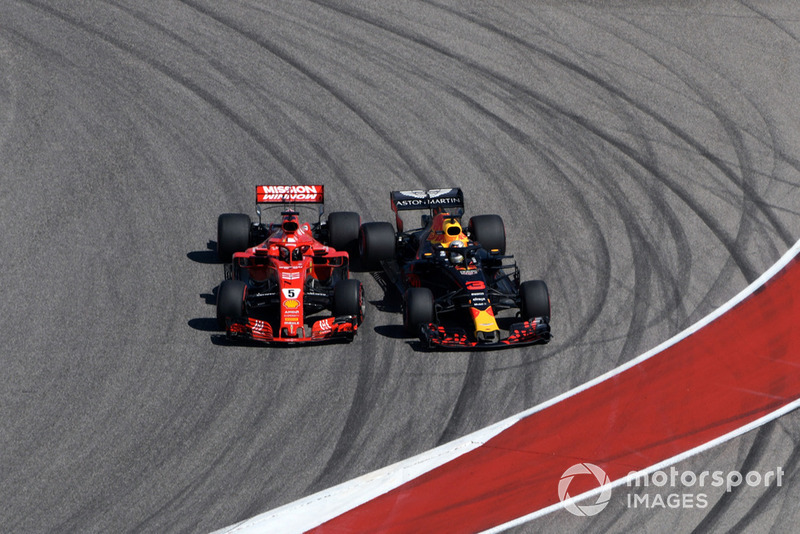