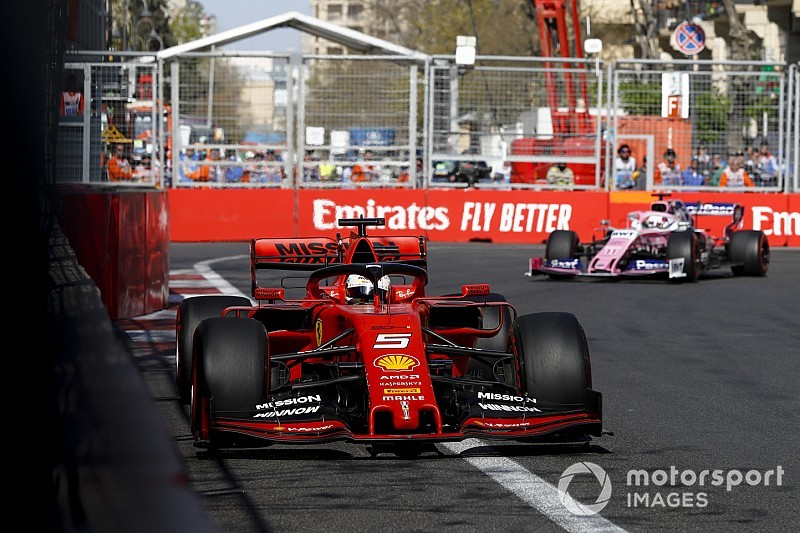 Sebastian Vettel thinks it is now "crucial" that Ferrari turns things around against Mercedes at the next race in Spain after its latest Formula 1 defeat.

Ferrari again showed the potential speed to fight for the win at the Azerbaijan Grand Prix, but a crash for Charles Leclerc in qualifying and difficulties on the soft tyre for Vettel left the door open for the fourth straight Mercedes 1-2 finish.

With third-placed finisher Vettel and Ferrari falling further back in the world championship standings, he is aware that the team needs to do better in the next race in Spain – as it returns to the track where it shone in winter testing.

"Obviously the last four races on average we were not quite there, [and] we are not the favourites going to Barcelona," said Vettel.

"But the team is in good spirits. We have another couple of stuff [updates] getting on the car so.. we need to chase them [Mercedes] down.

"We are looking forward to a smooth weekend because our first four weekends haven't been that smooth. It will be crucial to catch them and turn things around."

Vettel said his Baku race was effectively killed off by a slow opening stint where he could not get the soft tyres in to the right operating window.

"The first stint was really poor, I really struggled to initially get the tyres to work," he said. "They were too cold and then I damaged them, and then they were hot and they were damaged. They were never really working.

"I was really uncomfortable and inconsistent, and I couldn't get a feel or confidence with the car That is usually not so good around here

"After that, I was surprised, I was looking forward to a difficult stint on the medium tyres but no problems to switch them on and they lasted until the end with no problem. Much happier and much more confidence and I think we had some pace to go with them, sometimes put a bit of pressure."

Hamilton was "too friendly" with Bottas at start