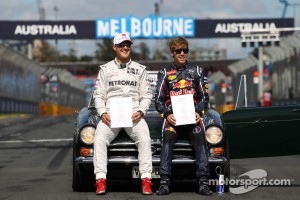 The seven time world champion has been roundly criticised since last Sunday's Spanish Grand Prix, after crashing into Williams' Bruno Senna at the end of the Barcelona straight.

He called the Brazilian driver an "idiot" on the radio and later defended the outburst, but the FIA did not agree, imposing a five-place qualifying penalty for Monte Carlo for causing a collision.

"For us, that manoeuvre of Michael's cost us a lot," Red Bull team principal Christian Horner said on Austrian Servus TV.

He said the debris from the crash not only damaged Vettel's front wing, but led to the reigning world champion having to serve a drive-through penalty due to activating his DRS wing in the yellow-flag zone.

"In those situations we don't have much time of course," he said, "and you can get very great speed differences (between the cars) on the straights.

"I think it should be classified simply in the category of racing accidents. Unfortunately it happens," said the reigning world champion.

"Of course you can always say what is what afterwards," added Vettel, "just as you can say that it always takes two to tango."

Mercedes' Norbert Haug was less eager to comment, although he did tell Germany's Sport1 that the team "accepts the verdict of the race stewards".