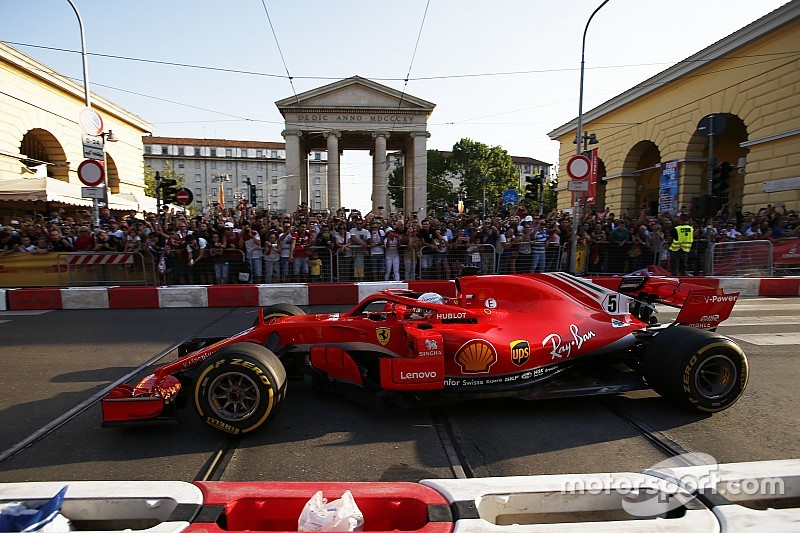 Sebastian Vettel has explained how using Kimi Raikkonen’s steering wheel contributed to his crash during Formula 1’s Milan demonstration ahead of the Italian Grand Prix.

Vettel suffered a low-speed incident during the Wednesday afternoon demo, running wide into a plastic barrier and dislodging the car's front wing.

Though the car was liveried with his numbers, four-time world champion Vettel said he was using Raikkonen's car and steering wheel, which he says has a different clutch control.

"I apologised," Vettel said. "I went with the car and the steering wheel of Kimi, who had the clutch on the other side.

"I didn't think about it, and at that point I was too fast. I asked if it would be possible to change the wing to do two more laps for the fans.

"Obviously it was my mistake, but that's OK."

Having the clutch control on opposing sides, which will be down to each driver's preference and what they are comfortable with, is not the only difference between Vettel's and Raikkonen's wheels.

Vettel's has an additional paddle on the back for an unconfirmed function.

Both have retained the single-paddle set-up this season.

Though the crash marked a sheepish beginning to Ferrari's home grand prix, Vettel arrives at Monza as favourite after his victory in Belgium last Sunday.

He said: "It's a special weekend for us and the team and I feel it as well.

"We hope to give Monza great emotions and with this Ferrari I know that we can do a great race.

"For us this race is a championship. I know it has created enthusiasm for the fans and I hope to be able to dream with them."