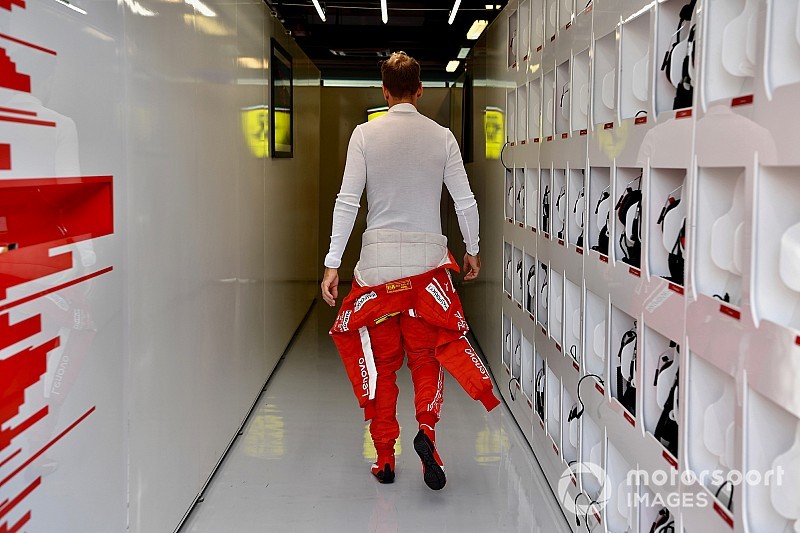 Sebastian Vettel says not to expect anything other than him remaining at Ferrari beyond 2019 as his "mission" at the Scuderia remains incomplete.

Vettel’s long-time Ferrari teammate Kimi Raikkonen has been replaced by highly-rated youngster Charles Leclerc for 2019, which has drawn comparisons to when Vettel was outshone by new Red Bull signing Daniel Ricciardo in 2014.

This even moved 2009 world champion Jenson Button to declare Leclerc could give Vettel a “tough decision” to make over his future.

Addressing his Ferrari future for the first time, at the launch of the team’s new car, Vettel pointed to the contract extension he signed in 2017 that committed him to Ferrari until the end of 2020 at the earliest.

“It's quite known that my contract goes until 2020 so, don't expect anything else,” said Vettel.

“I'm very happy here. Obviously my goal is to win the championship.

“We were not getting as close as we want, so there's still a job to do, and I feel that's my mission and the reason why I'm here, for myself, for the team.

Vettel joined Ferrari in 2015 and enjoyed the upper-hand over Raikkonen throughout their four years together, winning 13 races and twice finishing second in the championship.

Leclerc, who has only one year of F1 experience with Sauber, has been widely tipped to challenge Vettel more regularly.

At Ferrari’s launch new team principal Mattia Binotto said he hoped to have the “problem” of managing two drivers competing with each other, although admitted Vettel would get priority early in the season if the situation demanded it.

Addressing his performance advantage over Raikkonen, Vettel dismissed the suggestion it was “always that clear” and reiterated previous comments that he anticipates no problems with Leclerc.

“When you are teammates you see exactly what the other driver is doing and I think with Kimi it worked very well the last couple of years,” said Vettel.

“I think we had a similar feeling for the car.

“Obviously now Charles is there and I think he will be very quick, there is no doubt. I expect him to pick up very quickly.

“The main thing is to work together as a team. On-track I don’t need to remind Charles he wants to be quicker than me and the same goes for me.

“That’s normal. You find the 20 best drivers in the world in the 20 cars on the grid, nobody needs a reminder of that.”