Vettel: Ferrari would've been "worse off" on standard Pirellis

Sebastian Vettel believes Pirelli made “the correct call” in bringing thinner-tread tyres to Formula 1's Spanish Grand Prix, admitting his Ferrari team would've been “worse off” with the standard specification. 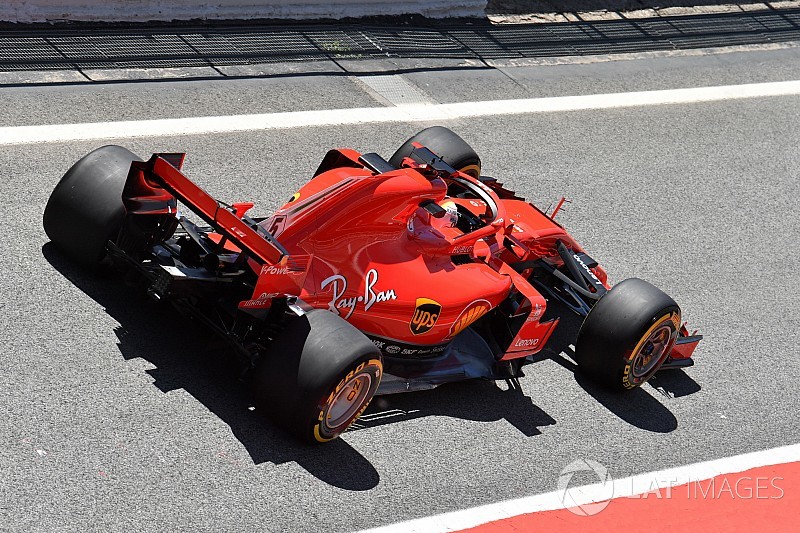 On the heels of three consecutive pole positions for Vettel, the battle between F1's leading teams Ferrari and Mercedes swung dramatically in favour of the latter at the Spanish GP – as the Silver Arrows locked out the front row and finished 1-2 in the race.

After teams struggled with overheating on the resurfaced Barcelona track in the pre-season, Pirelli supplied a modified spec of rubber for the Spanish GP, reducing tread thickness by 0.4mm.

Vettel hinted that this was making the biggest difference throughout the weekend, suggesting post-race that the new tyres – which will also feature at Paul Ricard and Silverstone - “maybe suited others better than us”.

However, after logging 136 laps in post-Spanish GP testing on Tuesday, during which he trialled both the standard and the thinner-tread tyre specifications, Vettel conceded Ferrari would've struggled even more without the change.

“I think it's pretty straightforward,” he said. “Obviously normally you don't get the chance to revisit this kind of decisions that are made, but I think we did now with the day that we had today, and I think the result is that, if we had the normal tyres on Sunday, we'd probably even be worse off.

“So I think it was the correct call, and it was our fault not to have the same tyre wear or life as other people.”

Asked whether he felt vindicated by the outcome of Vettel's back-to-back testing of the tyre specs, PirellI F1 chief Mario Isola told Motorsport.com: "Absolutely. I am very happy, I cannot hide that I am very happy! After a weekend like the last one, yes..."

Isola said giving all teams the opportunity to try out the two tyre specs in the test - which was something planned well before the Spanish GP weekend - was so that Pirelli could get a "proper comparison".

"The behaviour of the tyre over the race weekend was in line with our expectations," he said.

"In high temperatures it was avoiding blisters, that is the information we have from the weekend.

"Now it’s important to have feedback also on the feeling, the behaviour, this kind of stuff, and I am happy to know that Sebastian said that."

Vettel finished fourth in the Spanish GP, having made one more stop than the three drivers ahead, and insisted post-race that emulating their one-stop strategies was “not an option”.

He said the test day, in which he clocked the third-fastest time behind Red Bull's Max Verstappen and Renault's Carlos Sainz, came at an opportune time, allowing Ferrari to get a better understanding of why it had a “poor weekend” in Spain.

“It's good to have the test, to be honest, to be able to compare,” he said. “And I think we have some ideas, and now it's up to us to turn those ideas into reality.

“[The test] was quite good in terms of timing. It was a poor weekend for us, we were not quick enough. I think more than not quick enough we were obviously struggling to make the tyres last.

“Those two things are linked. But it was good to have the possibility to revisit, and now it's up to us to take action.”