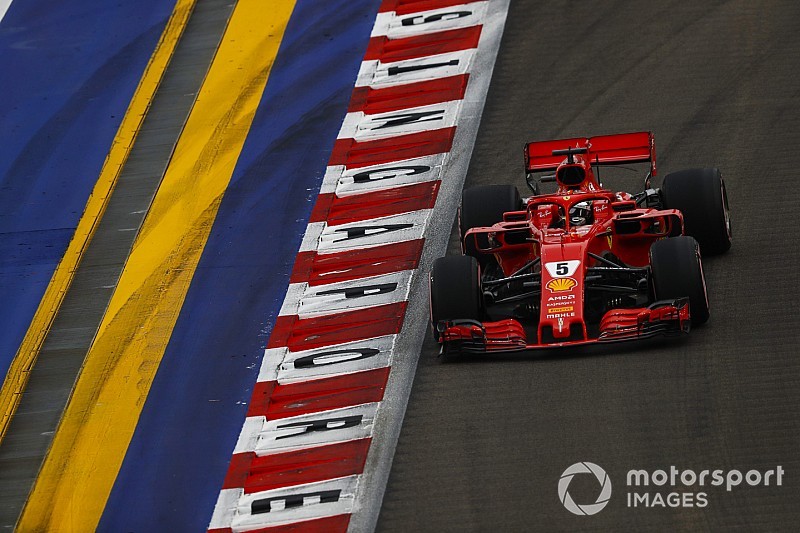 Ferrari's Sebastian Vettel described his performance as "not good enough" after slumping to third in qualifying for the 2018 Formula 1 Singapore Grand Prix.

Vettel headed Saturday's free practice by a comfortable half-second margin, but lost out to both Mercedes' Lewis Hamilton and the Red Bull of Max Verstappen in the final battle for pole position.

After climbing from the cockpit Vettel lamented what he described as a "messy" session.

"For sure I'm not happy with how the day went," said Vettel. "Qualifying for us wasn't as smooth as it should have been, other people obviously have done better than us, and that's why we're third.

"I am not worried about the gap [to Hamilton], I don't think it shows how strong we are. It's just disappointing that we didn't get the maximum out of our package."

None of the frontrunners improved their times in the final moments of Q3 after Hamilton hit the top of the timesheets with a spectacular 1m36.015s even he could not surpass.

Vettel made it through Q1 comfortably but had a more nervous time in Q2 after trying to use Pirelli's ultrasoft compound in that session. After a snap decision by the team to move on to hypersofts, Vettel had one flying lap to set a time good enough to progress to Q3 and struggled in traffic.

Once through to Q3 he was beaten by Hamilton in the first flying laps and then failed to improve on his own time in his second run.

"We were hoping for more than third," he said. "Lewis had a good lap, and congratulations to him, but I don't think it was unbeatable.

"The way we composed qualifying… it was difficult to get a rhythm, and I was struggling in Q1, Q2 and Q3. As I said before, other people did a better job - that's including Lewis's lap as an individual and them [Mercedes] as a team. It [third] is not what we wanted.

"I don't want to take anything away from Lewis's lap, but it's clear that we could have done better. I don't think there's much point in going into detail… maybe preparing the lap for qualifying, but in the end I had the laps and they were not strong enough or good enough to be near."

Ferrari's ultrasoft gambit in Q2 was a clear attempt to pave the way for a one-stop strategy.

Had Vettel and Raikkonen succeeded in setting their fastest Q2 lap on the ultrasofts they would have started the race on those tyres, enabling them potentially to run longer then others who had qualified on the fast but delicate hypersofts.

But when Raikkonen struggled and declared the ultrasofts "not fast enough", Ferrari decided to abandon the strategy mid-session – despite Vettel saying on the team radio that he could find another half a second on that compound.

After qualifying, Vettel declined to elaborate further on the strategy.

"It was clear what we tried to do and it didn't work," he said