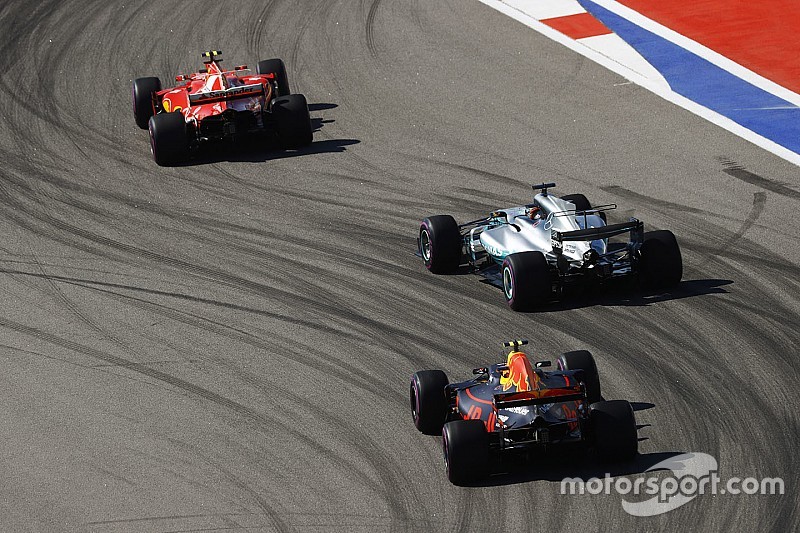 Sebastian Vettel says he hopes Red Bull can join the fight at the front of the Formula 1 grid from the Spanish Grand Prix, on the back of its major car update.

Red Bull is working on a radical overhaul of its RB13 to help bring much-needed downforce, after its early-season focus on producing a low-drag car did not deliver the benefits it hoped for.

So far Daniel Ricciardo and Max Verstappen have been unable to properly challenge Ferrari and Mercedes for positions, but they are keeping their fingers crossed that what comes for Barcelona will change things.

Speaking after the Russian Grand Prix, where Ferrari and Mercedes were again in a league of their own, Vettel said that the traditional arrival of updates for the start of the European season will hopefully lead to a different situation.

"I think it will be a very close race between Mercedes and us, I hope, and I also hope that Red Bull find some pace," said Vettel, who holds a 13-point lead over Lewis Hamilton in the standings.

"There's a lot of rumours around [regarding the update]. They are a strong team, they know how to build a quick car so I expect it's a question of when rather than if.

"But the sooner, the more exciting it will be for us. I'm confident that we have the right people, the right tools on board and we will make progress. It obviously depends on what others are doing."

Red Bull boss Christian Horner admitted that his team's situation was not an easy one, but was looking forward to seeing what it could do from the next race in Barcelona.

"We've given ourselves a lot to do but the whole team is focused on that and hopefully for the next race, we can start making progress," he said.