A threat of rain and a damp track did not deter Red Bull's Sebastian Vettel from taking his second pole this season, and his seventh of his career, by just edging out his teammate and home hero Mark Webber Saturday afternoon in qualifying for ...

A threat of rain and a damp track did not deter Red Bull's Sebastian Vettel from taking his second pole this season, and his seventh of his career, by just edging out his teammate and home hero Mark Webber Saturday afternoon in qualifying for Sunday's Australian Grand Prix at Melbourne's Albert Park. 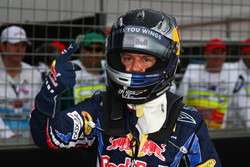 The young German recorded a one minute, 23 second lap after dominating the first two qualifying sessions. Ferrari's Fernando Alonso, who won the last race in Bahrain, sits comfortably on the grid in third.

"It is a great result for me and for the team," said Vettel, knowing that Webber beat him in qualifying at Vettel's home race in Germany last year. "We did a great step into qualifying by proving it and in the final session it was about whether or not it would rain again and we waited a little bit. The first lap was bad until I reached the last three corners and lost a little time on the last corner, but it was very, very good luck going into it, and I was very happy , and I think the result says it all.'

The first session began with gathering clouds, but the actual rain never fell onto the track. The new team drivers of Virgin, HRT F1 and Lotus and failed to advance, but the surprise of this session was the Renault Russian rookie, Vitaly Petrov, who just missed out by finishing in 18th position.

"I'm disappointed not to make it out of Q1 because the car has been competitive all weekend." Stated the former GP2 driver. "Qualifying is a new experience for me and I'm still learning: it's very busy out on track, it was difficult to get a clear lap and I didn't put my three best sectors together when it counted on my final run. The times show I had the pace to be in Q2, so of course I'm disappointed not to have reached my potential. The car didn't not feel as well balanced today, either, in the different track conditions. It will be a tough race starting so far down the field and the track is narrow so it's difficult to overtake, but I will try my best to get a good result tomorrow." 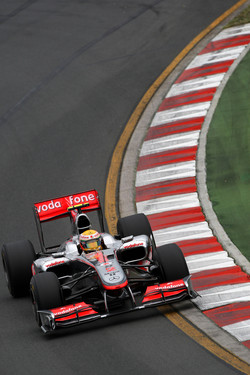 If the shock of Petrov was no big surprise to some, then in the second session, things got even more attention when former world champion Lewis Hamilton could not make the final cut. The Englishman to some, had other things on his mind, such as paying a fine for erratic driving the previous day on Melbourne city streets, but Hamilton claimed that the lack of grip because of the cool weather was the cause.

"I feel I got everything out of the car, I didn't have any more grip from the tires," he said. "I don't know if I got the right heat into the tires - at least Jenson (Button)'s doing a good job."

With Vettel setting the best time in the final session with minutes to go, not even a late challenge by Alonso could change the order. Vettel himself was the last driver on the track when time expired, proving that the dominance was there and could be possible on race day.

Jenson Button was fourth, while Felipe Massa was in fifth. The Mercedes pair of Nico Rosberg and Michael Schumacher followed in sixth and seventh, respectively, while Rubens Barrichello, Robert Kubica, and Adrian Sutil rounded out the top ten.

If the cool damp conditions during qualifying were bad enough, then the prediction of thunderstorms and heavy rain does not come too welcome for the drivers and fans alike when the lights go out on Sunday afternoon.