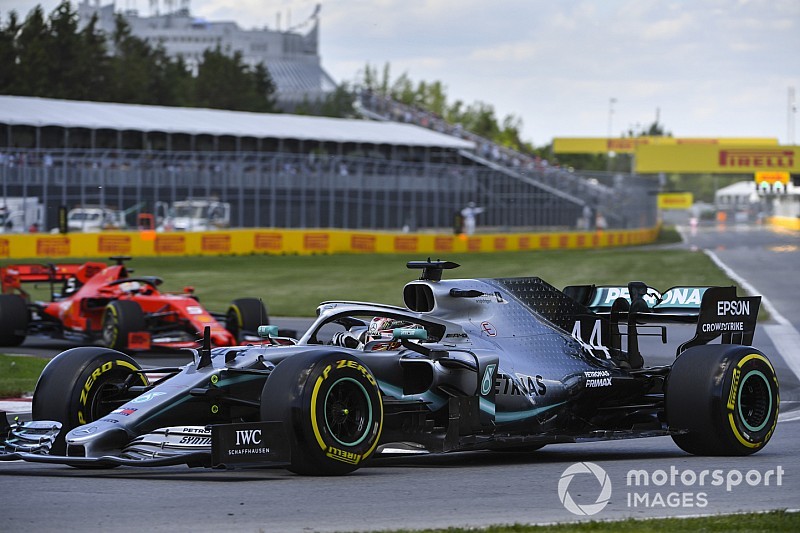 Sebastian Vettel believes there is still “a reasonable gap” to Mercedes in Canada despite his Ferrari Formula 1 teammate Charles Leclerc topping Friday practice in Montreal.

Leclerc led a Ferrari one-two after the first two practice sessions for the Canadian Grand Prix, with Valtteri Bottas heading Mercedes’ charge in third place, 0.134s off the pace.

Championship leader Lewis Hamilton did not set a representative time after clouting the wall and Vettel does not believe Ferrari is actually ahead.

He was pessimistic when he spoke to media on Friday and explained it was “because we’re not the fastest”.

“I know in terms of result, if you look at the one-lap performance, it looks like that this afternoon,” said Vettel.  “But I think there’s still quite a reasonable gap to Mercedes. That’s why.”

Vettel complained that he did not have “a great day in terms of tyres, they didn’t last very long” as track temperatures soared to 50 degrees.

He added: “It was not the most transparent session, with other people running into problems.
“Also, the car feels not yet the way I want it.

“Overall it was not so bad but we certainly need to improve if we want to put the car in a very good position for Sunday’s race.”

“FP1 was difficult, FP2 we improved,” said Leclerc. “But again I still expect Mercedes to be the strongest car around here.

“It’s not that we were one-two [in practice] that it will be the same [in qualifying]. I still believe Mercedes is very, very strong and I expect it to be very hard to beat them in qualifying.

“We need to work very hard. We did a good step in terms of performance from FP1 to FP2, the car felt better, but we should do another step to try to challenge Mercedes tomorrow.”

Another false dawn or a real chance for Ferrari in Canada?